Spread across 120 active congregations, orders, and religious institutions and living in several hundred different locations in three counties, keeping track of the more than 1,200 religious sisters living and ministering in the Archdiocese of Los Angeles is no easy task.

That job belongs to Sister Maria Carlos Valdez, EIN, vicar for women religious for the archdiocese, who likes to think of the sisters under her purview not as a group but rather a “community of communities.”

Herself a product of a bicultural and bilingual upbringing, Sister Maria has a better appreciation than anyone of the sisters’ diversity, whether in terms of their different charisms or their cultural backgrounds.

For example, she cites the Lovers of the Holy Cross in Gardena, marveling at how sisters whose first language is Vietnamese can work in education, health, and homelessness outreach under the congregation’s superior general, Sister Grace Duc Le.

“They’re individuals who belong to one community, and what one does will impact the whole group,” Sister Maria said. “They have a feeling that they’re not alone.”

The Missionaries of Charity (founded by St. Teresa of Calcutta), based in Lynwood, shows a selflessness to simply be present and listen to those in need, especially in solidarity with women on Skid Row.

“And they have no access to technology,” a detail that Sister Maria likes to recall. “That shows me their impact as people living in 2021.”

Sisters from 11 different missionary communities provide their services at several Korean-based facilities around the archdiocese. An immigrant population that could feel separated by language barriers has instead become important witnesses and transmitters of faith.

“If they weren’t there, there might be no faith formation in their Korean community parishes,” Sister Maria emphasized. “They show it’s better for us to be inclusive regardless of the language.” 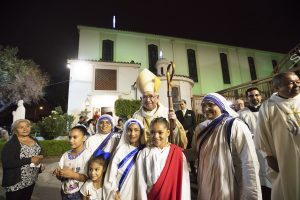 Archbishop José H. Gomez with sisters of the Missionaries of Charity during a 2018 visit to St. Emydius Church in Lynwood. (Victor Alemán)

And yet, after four years on the job for the sister, there still remain some important practical questions to be answered.

How do such religious communities in LA pull together on issues of social justice, health care, education, human rights, or even just gathering in prayer? What communication or cultural challenges do they face in their alliances? In what ways can these consecrated women share their joys and sorrows with the Catholic community?

Some answers are now on their way, with the help of a $190,000 grant provided last summer by the Conrad N. Hilton Foundation’s Catholic Sisters Initiative.

Sister Jane Wakahiu, LSOSF, Ph.D., associate vice president of program operations and head of Catholic Sisters, saw an opportunity to help sisters in the archdiocese by funding this project, the goal of which is to develop a working plan or road map for the Office of Vicar for Women Religious over the next three to five years.

Embracing the Mission Anew (EMA) became the project title of a yearlong needs assessment for sisters throughout the archdiocese. Sister Maria and administrative assistant Maria Guadalupe Reyes became the overseers.

“The Hilton Foundation has given a beautiful gift to all the people of the Archdiocese of Los Angeles,” said Archbishop José H. Gomez. “This grant will help us to plan for our future and encourage the vital work of our religious sisters in proclaiming the love of Christ and his mercy in our community.”

Sister Maria has seen the need for this kind of project for a while.

“I remember six months after coming into this office, my first question was: Where is the database for all the sisters in the archdiocese?” said Sister Maria.

She found that database. She also found that it was outdated and often inaccurate.

“We had no budget, no resources,” she added. “We just kept asking ourselves: Where do we begin?” 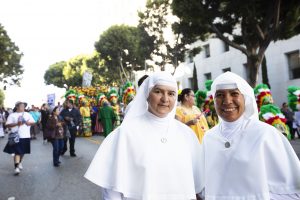 Sisters of the Servants of Mary, Ministers to the Sick at the annual Our Lady Queen of the Angels procession in August 2017. (Victor Alemán)

Conversations with Sister Jane, a member of the institute of the Little Sisters of St. Francis of Assisi, Kenya, but who is now based in LA, led to the project funding from the Catholic Sisters Initiative.

“After connecting with Sister Maria, we understood the need for a landscape study that articulates the needs and voices of sisters across the archdiocese,” Sister Jane told Angelus.

In her experience with other communities, this kind of study is particularly useful in “creating and strengthening sisters’ collaborative networks,” she explained.

Today, it is one of the world’s largest, with $7.5 billion in assets. It has awarded grants to date totaling more than $2 billion, $207 million worldwide in 2020, benefitting an array of charitable causes, ranging from early childhood development and homelessness prevention to safe water access and refugee integration.

And then there are the sisters.

According to its mission statement, the Catholic Sisters Initiative aims to “increase the capacity of sisters to meaningfully address poverty, and elevate their voice and influence as moral leaders of change in the global effort to relieve human suffering and restore human dignity” with a target date of 2030.

Through surveys, focus groups, and listening sessions coordinated by The Center for Applied Research in the Apostolate at Georgetown University, some of the initiative’s key findings in Los Angeles include:

As the research was conducted, the Hilton Foundation also stepped in last fall to approve a $75,000 emergency COVID-19 grant to “help mitigate negative effects of the pandemic and associated economic downtown” for eight congregations in the archdiocese. 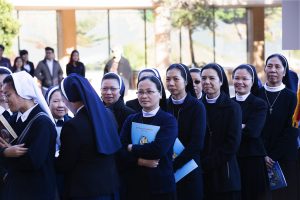 Sisters of the Lovers of the Holy Cross at the annual Vietnamese Martyrs at the Cathedral of Our Lady of the Angels in 2015. (Victor Alemán)

One congregation lost as many as five sisters to the virus within just a few months. As the year progressed, other congregations lost fewer, but others lost more. Also accounting for the passing of older sisters, there are 200 fewer in the archdiocese between the numbers reported in 2019 versus those reported in January 2021.

Some of that emergency funding helped the Daughters of St. Paul, who needed help with repairs to their Culver City bookstore damaged by looting during last summer’s civil unrest. Several other congregations used their own food supplies to nourish unhoused people in their neighborhood.

Sister Maria, a member of the Esclavas de la Inmaculada Niña community serving in Boyle Heights, said the survey results revealed things many of her fellow sisters would not otherwise publicly voice.

“The sisters will always work toward the benefit of society — it’s in their nature and vocation not to grow in their ego,” said Sister Maria. “But we know that because of women religious, we have hospitals and schools and so many educated people in society.”

As the collaborators in the Embracing the Mission Anew project began to share data with Sister Maria, she said it reminded her of when and why she began her vocation as a teenager.

“One of the things I said when I first started was, ‘With a trembling heart, I am here,’ ” Sister Maria repeated. “This really makes me tremble to see the huge work that has been done and is still to be done.”

The realities of a decline in the sister population — there were some 4,500 in 1965 — aren’t lost on Sister Maria. For now, the bigger goal is making sure the sisters are a visible sign to a world that needs their presence.

“If we know what the sisters’ needs are, then we can impact so many more others through the sisters’ works,” said Sister Maria, who said she hopes the project can help shed light on “all those good and selfless things sisters do in the archdiocese.”

“Even then, it is impossible to see all they do because there is no stop for a sister. Whenever there is a need, there is a sister, regardless if it’s recognized or not, or compensated or not. The sisters are going to be there.”