The news came last month — Feb. 18 to be precise — and every time Little Sister of the Poor Clotilde Jardim thinks about it, she can’t help but feel sad.

“We never expected it,” said Sister Jardim. “You don’t even want to talk about it ’cause you just start to feel so bad.”

The nun was speaking about the announcement that her order’s Jeanne Jugan Residence in San Pedro for the elderly and dying poor would be closing. Sitting at a wood conference table with three fellow women religious and a priest, the shock of the decision still hasn’t seemed to have worn off.

The sisters have staffed the home located along the last of Western Avenue’s 29 miles for four decades, relying only on Divine Providence to carry out their mission. Now, it seems, the plans from above have changed.

The religious community, whose founder, St. Jeanne Jugan, cared for impoverished elderly in French towns and cities during the early 1800s, first came to Los Angeles from Chicago on a train back in 1905. The sisters established St. Ann’s Home for the Aged, operating it until the wood-beam building could no longer meet fire codes.

The Archdiocese of Los Angeles stepped in to donate the former all-boys Fermin Lasuen High School property to the sisters. In August 1979, the sisters moved 120 residents across town to their new home, complete with an ocean view.

Now, the sisters are left hoping that the property’s eventual buyer will agree to continue the home’s use as a home for the elderly.

“It’s our ideal to find someone who’s very close to our mission, our approach, our desire to continue as a home for the elderly,” said Mother Maria Christine Lynch, who oversees the order’s Chicago Province, which includes California. “Our desire would certainly be for a Catholic or faith-based organization.”

As the order withdraws from the home, Mother Lynch hopes that finding such a buyer will allow residents to stay and be cared for, “a smooth transition, which removes as much of the anxiety and the fear and the uncertainty for residents.” 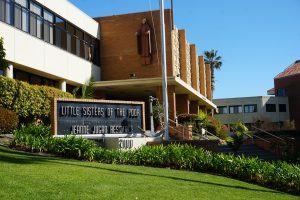 Like her friend Sister Jardim, Sister Anthony Selewicz is from Oakland. Both entered the Little Sisters right out of high school after volunteering with them. Both have lived and worked at the Jeanne Jugan Residence during multiple stints.

She said she’s told distraught residents to “start praying that you’ll be able to stay.”

“It’s almost like a family, when your relatives have to move away from each other,” she explained. “The residents have confidence in us. So they’re going to miss us a lot.”

Sister Jardim said while the needs of the residents can be demanding at times, they show a sincere appreciation for the spiritual life the home offers them, helped by the presence of a chapel and a chaplain.

Mother Lynch said the special bond between the Little Sisters and residents was in serious jeopardy thanks to the seemingly never-ending list of government regulations for nursing homes and other elderly care facilities.

For the San Pedro house and the other 20-plus homes across the U.S., striving to keep up with the state and federal rules — which regulate food quality, building safety, and environmental concerns — has proven to be a complicated task.

“And those are good and necessary,” said Mother Lynch. “But they create a gap, too, the bond we sisters want to have in the lives of our residents. End-of-life care is so important for us. That is why we are here, to accompany these elderly persons in the last part of their lives to God. And we have to be there for them, and we want to be there for them.

“But you have all kinds of regulations and other distractions that come into play now that widen that gap. So we need more sisters to be able to assure the residents of our presence.” 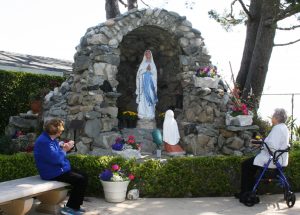 Another factor that has not worked in the Little Sisters’ favor is the decline in vocations. Like a great majority of Catholic religious orders and communities today, their numbers have been in decline. In the 1960s, the community had about 5,000 members worldwide. Today, it’s closer to 2,000, and just around 300 in the order’s homes in the U.S.

At the Jeanne Jugan Residence right now, it’s down to seven Little Sisters working with 93 staff members to care for 97 residents, with different levels of physical and mental health needs.

For Father Mark Cregan, a lawyer for the Little Sisters of the Poor, the San Pedro home is the seventh home for the elderly in seven years he will help “transition” when the women religious leave. He’s worked with the order long enough to know that while the process won’t be easy, the Little Sisters have a few things going for them.

“The sisters do a process unlike any other real estate process in the world,” he pointed out. “They don’t start with a price. And sometimes I wish they would give a price a little earlier. For them it’s very important who is going to be the buyer, because they don’t want to sell and have the buyer turn around and sell the place a year or two later.”

But, he added, “Once in a while it happens, like for everyone else.” 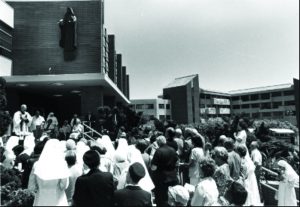 On July 26, 1979, the statue of St. Jeanne Jugan was blessed at the new home in San Pedro, which was dedicated in her name: Jeanne Jugan Residence. (©LSOP San Pedro)

The sisters’ lawyer, who also has a private practice in New Jersey, said a sale of a Little Sisters’ home really depended on relationships. He and some sisters in authority would try to get a sense of the potential buyer’s interest. Did they want to keep the enterprise going as an elderly care facility?

More pragmatically, did a buyer have the financial wherewithal to make up for the Little Sisters’ begging expertise to survive? That begging, which went back to St. Jeanne Jugan going from house to house asking for help in the early 1800s, has been bringing in an average of $2 million to $3 million dollars every year per home in food and other donations.

But Father Cregan reported that most of the buyers he worked with, in fact, had done just that by adding 20 to 45 beds to the convent where sisters had lived on the property.

The order’s general counsel said there are two reasons why the sisters have been able to find good buyers who wanted to carry on their care of the elderly. One was simply how many people admired the sisters’ charitable work and wanted to continue it. But the second and even more important reason was trusting in Divine Providence to intercede. “Truthfully, I’ve never seen Divine Providence fail with the sisters,” he said.

Part of that trust in Providence, said Mother Marguerite McCarthy, superior and administrator of the Jeanne Jugan Residence, is knowing that God will not abandon the sisters or the home’s residents.

“I think it’s a sad time and there’s a lot of emotion involved,” she said. “But there’s an acceptance because it’s God’s will, and this is the best decision that our superiors could make under the circumstances. So, I can see acceptance and praying for the outcome for the future — for our residents, especially.

“And so,” added the mother superior, “it’s a feeling of just letting go and letting God do his work in whatever way he ordains.”

Editor’s Note: At a March 4 meeting, Los Angeles County Supervisor Janice Hahn introduced a motion, which was approved by her colleagues, to explore taking over the Jeanne Jugan Residence in San Pedro. The county’s real estate department was ordered to “pursue negotiations to acquire the Little Sisters of the Poor location with the intent of preserving it as a home for low-income seniors.” Progress reports are currently being filed.