How Los Angeles came up short on permanent housing

For many Los Angeles residents and one federal judge frustrated by the city’s inability to hold back the rising tide of homelessness, time is short.

But as of last fall, only three Proposition HHH projects had been completed, with just 228 housing units built, according to a September 2020 report by LA Controller Ron Galperin.

Meanwhile, the number of homeless residents across the city jumped to 41,290, a 16% increase from the year before and a 45% rise since the passage of HHH, according to a January 2020 homeless count.

Deaths among the unhoused population climbed almost 100% over seven years, with 1,047 people dying on the streets in 2018 alone, according to the controller. And COVID-19 has caused outdoor health and safety conditions to deteriorate even further.

“While these facts illustrate the depth of the humanitarian emergency, they also reveal how one of the city’s primary tools to address it is coming up short,” Galperin said.

Last month, Garcetti responded with a $955 million proposal for the upcoming fiscal year to combat the city’s homelessness scourge. A third of the funds would come from HHH for housing, including a reported 5,651 apartment units to be finally in the works. 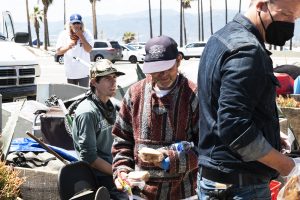 Residents of the Venice Beach boardwalk homeless encampment receive food and hygiene kits from the Order of Malta in late April 2021. (Victor Alemán)

Enter U.S. District Judge David O. Carter, who intervened with a 110-page order to block the mayor’s $1 billion homeless plan and reserve the money to shelter every homeless person on skid row by mid-October, and earlier for single women, children, and families.

The explosive ruling, issued in response to a lawsuit filed by a coalition of downtown business owners, castigated LA county and city officials for trying to build permanent housing at the expense of more temporary shelter, “knowing that massive development delays were likely while people died in the streets.”

“Los Angeles has lost its parks, beaches, schools, sidewalks, and highway systems due to the inaction of city and county officials who have left our homeless citizens no place to turn,” Carter declared in his brief. He pointed to “a legacy of entrenched structural racism” that caused thousands of Angelenos — a disproportionate number who are Black — to end up on the streets of Skid Row.

Garcetti, who in news reports questioned the legality of the injunction, did not respond to a request for comment. On May 13, however, a federal appeals court temporarily paused Carter's order so that an appeal of the ruling by the city and county of Los Angeles could be heard.

Former Los Angeles Councilman Dennis Zine, who is Catholic, laid blame squarely at the feet of the mayor, the city attorney and other elected officials in America’s second largest city for failing to control its sprawling homeless problem.

Zine, a former LAPD cop and head of the local police union, said he had just stopped at an intersection in his former district in the west San Fernando Valley, when he saw a man who appeared  to be homeless urinate in public.

“It’s disrespect for humanity, and for public health,” he said. So is homelessness, he added. “It’s inhumane to accept it. It’s unacceptable for elected officials not to be able to handle it.”