Auxiliary Bishop Timothy Freyer of the Diocese of Orange was among the more than eight thousand U.S. pilgrims who gathered on the Mount of Beatitudes in Galilee on July 19 for a vocational meeting of the Neocatechumenal Way.

“God has been very good throughout this week for me,” Bishop Freyer said after witnessing some 250 young men express their openness to discern the priesthood and 300 young women do likewise for the religious life during a “vocational call” that brought them to the meeting stage for a special blessing.

Bishop Freyer said he made the trip to Israel to “encourage and support” the young pilgrims present from his diocese, as well as those from the neighboring dioceses of Los Angeles, San Bernardino, and San Diego. But he also admitted that the pilgrimage had a meaning for his own personal vocation.

“As a bishop, it’s not about programs and what we’re supposed to do to run this parish or that parish,” said Bishop Freyer. “It’s about proclaiming the good news of Jesus Christ risen from the dead, and here where we are in the land where Jesus was born, died, and rose. We see this and our call as we go back is to continue with him.” 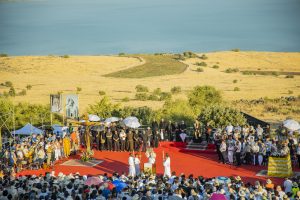 The grounds of the Domus Galilaeae, where the July 19, 2022 vocational meeting took place, are located on the Mount of Beatitudes overlooking the Sea of Galilee, where Jesus is believed to have proclaimed the Beatitudes. (AEROJO Drone Productions)

The July 19 meeting took place outdoors on the grounds of the Domus Galilaeae, an international retreat center on the Mount of Beatitudes overlooking the Sea of Galilee, where participants braved sweltering humidity and temperatures over 100 degrees. The event took place six years to the day after the death of Carmen Hernandez, co-initiator of the Neocatechumenal Way with Kiko Argüello. The diocesan phase of Hernandez’s cause for beatification is set to open soon in the Archdiocese of Madrid.

Pilgrims prayed, sang, and heard a preached announcement of the kerygma — the good news of the death and resurrection of Jesus Christ — and listened to a sung recitation of the beatitudes from the Gospel of Matthew before remarks by His Beatitude Archbishop Pierbattista Pizzaballa, Latin Patriarch of Jerusalem, who presided the encounter.

The American youth, including some 1,100 from California, made pilgrimage through Israel, Palestine, Egypt, and Jordan in small bus groups, proclaiming the Scripture passages corresponding to each holy site they visited. Many had the chance to visit and even be hosted by local Christian communities in the Holy Land.

Archbishop Pizzaballa thanked the pilgrims in his remarks for the fresh energy their presence brought to his diocese, even if their dedication — especially in the hot weather — seemed “a little bit crazy.”

“But to follow Jesus we need to be crazy,” he added. “So, welcome to the club!” 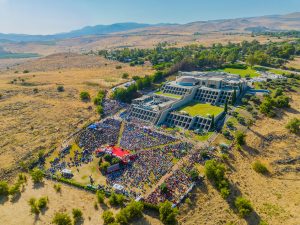 More than 8,000 people gathered for the July 19 vocational encounter on the Mount of Beatitudes, where temperatures passed 100 degrees. (AEROJO Drone Productions)

Apart from the young men and women who answered the vocational call, some 200 families also came to the stage at the end of the meeting to express their availability to be sent anywhere in the world as missionary families. Those who responded to the calls are now invited to begin a period of discernment in their parish-based communities on whether to enter the seminary or convent, or be sent as missionaries.

Bishop Freyer called it a “delight” to get a front row view of the response to the vocational calls.

“It wasn’t a hesitant response,” he said. “It was a joyful, enthusiastic response and was very moving.”

Two days before, Bishop Freyer had celebrated Sunday Mass with 700 pilgrims from Southern California at the Domus Galilaeae. Throughout the week, he accompanied different groups from Orange to holy sites, including at the Mount of Transfiguration (Mount Tabor), the Primacy of Peter on the Sea of Galilee, and Magdala.

The other U.S. bishop at the meeting, Bishop Peter Baldacchino of Las Cruces, New Mexico, also had a chance to “be among the sheep” from his own diocese during their stops at several holy places. He said he was impressed by the reaction that proclaiming the Scripture in those places produced among the young people on his bus.

“I was amazed at what the word of God was doing in them,” he remarked after the July 19 meeting. “They felt comfortable enough to share their innermost pains, and they encountered Christ in their midst, in the other and in themselves.” 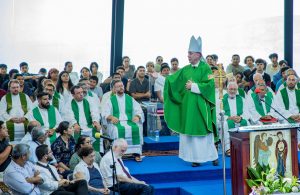 To make the pilgrimage, many of the Southern California pilgrims had to change vacation and school plans, while some took on extra jobs. Younger ones organized car washes and food sales to raise funds for the trip.

Archbishop Pizzaballa thanked the pilgrims for making the journey, citing the importance of an event of such a scale after the COVID-19 pandemic halted almost all religious travel in the region.

“I am happy to see this rare group of several thousand of youth, in our land after years of silence, because of the pandemic,” he said. “It is a beautiful beginning.”

“My prayer for you,” the Italian prelate later told the American pilgrims, “is that when you go back to your country, you can say: ‘Yes, we also have been in Holy Land, we saw the empty tomb, and we met the Risen One.’ ”