Archbishop José H. Gomez joined the Catholic bishops of California in a special presentation of the Stations of the Cross to overcome racism in our hearts and society. The video, subtitled in Spanish and Vietnamese, is available at https://lacatholics.org/.

The “Stations of the Cross” is both a reenactment and a reminder of the struggle and humiliation that Jesus Christ went through on his way to crucifixion and his ultimate resurrection. There are 14 stations – each depicting incidents that took place as Jesus carried his own cross to Mt. Calvary – reflecting on the persistent sin of racism as a rejection of the full humanity of the children of God. 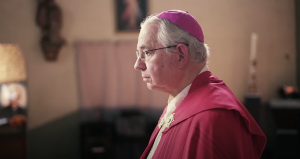 “As we pray today, we recall that our Church and our local community here have been shaped by the faith and the gifts of African Americans from the beginning,” prayed Archbishop Gomez. “So let us ask our Lord today to bring us closer as brothers and sisters, and continue to build the family of God here in California and everywhere in our nation and world.”

Anderson Shaw, Director of the Archdiocese’s African American Catholic Center for Evangelization, lead the opening prayer saying: “we pray for the grace to recognize the systems that do not support the dignity of every person, that do not promote respect for those who are seen as other, who bear the legacy of centuries of discrimination, fear, and violence.” 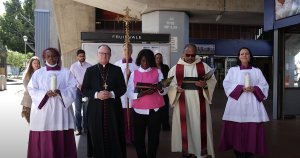 The Sixth Station was prayed at the Fruitvale BART station in the Diocese of Oakland, the scene of a fatal shooting of Oscar Grant III in 2009 by a police officer. (Screenshot via YouTube)

Each of the 14 Stations of the Cross was led by a bishop of a California Catholic diocese at pertinent locations throughout California. The Sixth Station was prayed at the Fruitvale BART station in the Diocese of Oakland, the scene of a fatal shooting of Oscar Grant III in 2009 by a police officer. The Diocese of San Diego presented the tenth Station of the Cross in central San Diego where the headquarters of the KKK stood in 1920.

Archbishop Gomez concluded the reflection by saying: “If people realize the dignity of the human soul altogether from external appearances they will be forced to recognize the equality of all men in the sight of God. Let us make that our goal in these weeks and months ahead. To help our neighbors to see the eternal soul of every person and to realize the beautiful dignity and equality that we have in God’s eyes.”

This presentation is also intended to commemorate the fifth anniversary of the tragic killings at Emmanuel AME Church in Charleston, South Carolina and Juneteenth celebrating the end of slavery in the United States.

For additional background on the video and participating dioceses, please visit https://www.cacatholic.org/california-bishops-hold-%E2%80%9Cvirtual%E2%80%9D-stations-cross-draw-attention-sin-racism.