San Diego is a military town, so perhaps it's not surprising that the Diocese of San Diego would be home to the Capodanno Society.

The ministry, which is based at St. Brigid Parish but is open to all, is named after Maryknoll Father Vincent R. Capodanno, who was killed in action as a U.S. Navy chaplain during the Vietnam War, was posthumously awarded the Medal of Honor and is currently on the path to canonization. 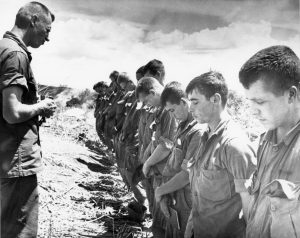 Maryknoll Father Vincent R. Capodanno, a Navy chaplain who was killed while serving with the Marines in Vietnam, is pictured ministering in the field in an undated photo. (CNS photo/courtesy Maryknoll Fathers and Brothers)

The Capodanno Society's mission, as expressed on its Facebook page, is "building community among active duty and retired military Catholics and their families in San Diego."

It has accomplished this through a variety of events, including monthly dinner socials featuring guest speakers. The dinner socials began in March 2019 and were discontinued with the COVID-19 lockdowns, but are set to resume Nov. 18.

The Capodanno Society's origins can be traced back to the fall of 2018 and a conversation between its co-founders, Noreen Domingo and David Murphy, about the challenges they faced as Catholics and as members of the armed forces.

Both Domingo and Murphy have since concluded their service in the U.S. Navy, and Murphy has relocated to South Bend, Indiana.

Domingo, president of the Capodanno Society, said the group was envisioned as "a place where military Catholics can go once a month" to find a community of people who can relate to their experiences.

However, it soon became apparent the group's dinner socials also were attracting civilians, who felt that the speakers' presentations on topics such as spiritual warfare had practical applications for their own lives.

Murphy said he hopes the Capodanno Society gives "people in the pews ... a place to meet and encounter military Catholics, be they active duty, reserve, veterans, dependents or simply supporters."

Attendance is now evenly split between those with a professional or familial connection to the military and those without such ties, said Domingo. Through the group's events, civilian attendees have developed a better understanding of military life, even to the point of knowing some of the jargon.

Diverse life experiences also can be seen among the group's military members.

"It's really unique to have a retired admiral on one side of the room and then a junior enlisted, who just signed up two months ago, in the room at the same time," said Domingo, who sees this as an expression of the universality of the Catholic Church.

Murphy recalled one of the Capodanno Society's first meetings, where a newlywed couple was able to hear two retired captains, a lieutenant on active duty and a former staff sergeant share their advice for a successful Catholic military marriage.

"The (younger) spouses exchanged numbers with the older spouses," he said. "Later, I found out that one of the retired couples took a young spouse out, when her husband was deployed, to give her a night out and be there for her."

Last year, at the height of social distancing, the Capodanno Society held several virtual events, including one in May 2020 where two group members reflected on the similarities between deployment and the COVID-19 lockdown and on how lessons learned from the former could be applied to the latter.

That same month, the group organized a rosary drive on behalf of a group member who was preparing to go on deployment and wanted rosaries to distribute to fellow Marines in his weekly rosary prayer group.

The Capodanno Society also held its second annual Polar Plunge in February, where more than a dozen participants jumped into the frigid waters of the Pacific Ocean in an expression of asceticism shortly before the start of Lent, and its first annual "9/11 Run to Remember 5K" to mark the anniversary of the terrorist attacks on the World Trade Center and Pentagon.

At the request of the U.S. Archdiocese for the Military Services, the Capodanno Society has been offering weekly catechism classes at Marine Corps Recruit Depot San Diego, or MCRD, since summer of 2020.

The catechism classes are held every Sunday, except on days when the base has scheduled a guest speaker for all recruits, said lead catechist Thomas zu Hone, a Capodanno Society member who served in the Navy until late July.

The curriculum is composed of 12 lessons, each of which takes about an hour and a half before the recruits are dismissed to attend Mass.

About 250 recruits attend a typical week's class, though that number can swell past 400 during the summer, he said.

"Through the ministry at MCRD, I feel I have been blessed with the opportunity to help these young Marine recruits get an early start to building their faith and their faith community with fellow Marines," said zu Hone. "In doing so, they will hopefully be encouraged and grounded in their Catholic faith in order to boldly pursue a life of Christ while in the military."

Murphy told The Southern Cross, San Diego's diocesan newspaper, he hopes that through the Capodanno Society, people will encounter the group's namesake.

Father Capodanno, who has the title "Servant of God," was not "some 1,500-year-old saint with a huge beard and robed in a habit, emerging through the mists of time across the centuries," said Murphy, who cited pictures of him smoking with Marines, videos of him flying in military helicopters and testimonies of those who served alongside him.

"He showed that even in the military, in the throes of combat, in the difficulties of deployment, amidst a battalion of infantry Marines, sanctity and holiness is possible," he said. "I hope, through meeting this saint, people see that they can incorporate their faith into their daily lives and military careers."

More about the Capodanno Society can be found on its Facebook page. The Father Capodanno Guild has more about the priest and his sainthood cause on its website, https://www.capodannoguild.org.