Recently a piece on the editorial page of the Wall Street Journal introduced readers to what it calls “Space’s final frontier.”

“Evidence is growing for extraterrestrial life in our solar system, and exploration is cheap,” read the subtitle of the op-ed, written by an engineering professor who also works as CEO of a company that makes “plasma thrusters for small satellites.”

The piece was really a kind of advertisement looking to interest “billionaire” investors in the technology for that “cheap” exploration. After giving some numbers and talking about the possibilities of life on other planets he came to a conclusion that caught my eye: “Finding evidence of life beyond earth would reshape the fields of evolutionary biology and pharmacology, and possibly theology as well [emphasis added].”

A book containing C.S. Lewis’ three “science fiction” novels given to me by a priest friend for Christmas last year came to mind. I am two-thirds of the way through the trilogy, which imagines life on Mars (“Out of the Silent Planet”) and Venus (“Perelandra”), where no original sin was committed.

Speculative or “science” fiction often deals with theological and philosophical issues, but rarely in such an orthodox way. Lewis’ ideas about angels and mankind in innocence and after read like corollaries of St. Augustine’s ideas about the Fall seen in his book “The City of God.”

Rarely does what I read in the Wall Street Journal remind me of Lewis, but the Spirit blows where it wills. I decided to take up the issues involved with my eighth-grade boys religion class in our parish school.

First, I asked, how many believed in extraterrestrial intelligent life? Some polls say a majority of Americans believe in intelligent life elsewhere in the universe. Our popular culture, witness “Star Wars” and “Star Trek” (not popular with my eighth-graders, by the way), and planets with names like Krypton, certainly attests to the attraction of the idea.

Of the boys in the class, all but two believed in extraterrestrial intelligent life and even those were “unsure.”

Second: Had anyone they knew thought they experienced something indicating alien life? Several recounted stories of strange lights in the skies. To reassure them I said it was probably our government spying on us, but said I had an open mind. Third, I asked them what their reaction would be to a meeting with an intelligent being from another planet.

Most concluded with my student Murdock, who is always quick to answer my questions, that they would run away from such a meeting, but when I insisted, they admitted they would have some curiosity about the extraterrestrial civilization. “And if they asked you about your religion, what would you say?” I asked them. That stumped the group for a minute.

“Would the aliens need to know about Jesus?” I asked them. This is one of the theological issues Lewis treats. “No,” said Amari, but more than a little doubtfully, “They would probably have their own religion.”

I said that if we believed that Jesus really was the Second Person in the Trinity, he would be the God of all the universe, wouldn’t he? St. Augustine had heard of “monsters” in other parts of the world and was fairly credulous (he accepted the possibility of the existence of the race of the Sciopedes, which had one leg with two feet, could run without bending its knees, and had the unusual advantage of being able to lie down in the summer and shade itself from the sun with its feet).

St. Augustine said, “However unusual to us may be the shape of his body, or the color of his skin, or the way he walks, or the sound of his voice, and whatever the strength, portion or quality of his natural endowments is descended from the first man.” 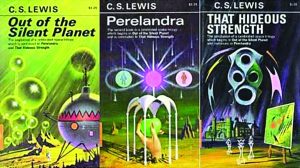 The Doctor of Grace, as St. Augustine is called, was also apparently a flat-earther, who discussed whether there might be other humans on the flip side of the planet (although he doubted it.) What if he had believed in the Copernican system and its implications for the infinite creativity of God? Wouldn’t all rational animal life, wherever found, be like us, image and likeness of God? If there was intelligent life other than humankind on earth, wouldn’t they have souls?

“So, yeah, they might need him,” was the consensus the boys came up with. I am not sure many adults have followed that logic. The old cliché was the alien would say to us, “Take me to your leader.” Have you ever heard of anyone saying, “I will take you to my Lord?”

Unlike Lewis, I could imagine that all intelligent life in the universe has experienced the Fall and any extraterrestrials would also need Jesus’ saving grace. What if the earth was chosen for the Incarnation because we were the most backward of all the civilizations in the universe?

The incursions of UFOs could be the space-age camels of the Magi. Maybe, then, some intelligent life on a solar system far away from us might be challenged to think, “What good could come from earth?”

If intelligent life were discovered somewhere “far away” and there was a means of entering into contact with their cultures, I would sign up to be a missionary. I’m sure I would miss paying off the debts of my parish, figuring out what to do with our plumbing issues, and other such duties, but I always liked the e.e. cummings poem with the theologically unfortunate wording: “Listen: there’s a hell/ of a universe next door; let’s go.”