Why we should seek St. Frances Cabrini's help in today’s immigration crisis

I recently traveled to New York City with a priest from El Salvador who was visiting his brother in New Jersey. The priest had never heard of St. Frances Xavier Cabrini, so I told him that he could pray for his family members in the U.S., some of whom are in various stages of obtaining legal status.

At New York’s Penn Station, I had some difficulty buying a ticket to ride the subway. One machine wasn’t accepting credit cards and I got some help from a policeman who was standing nearby.

It seemed the whole world was on the subway that day. The man ahead of me in the ticket machine line pressed the button for Chinese language instructions.

Another woman spoke in a thick foreign accent to the kind policeman about the difficulty of getting a senior discount fare, to which he replied that such a discount would require an official ID. The way he spoke to her suggested he feared she didn’t have such a document.

I found this prelude appropriate on our way to visit the relics of Mother Cabrini, whose remains are in a glass casket below the altar at her shrine in the Washington Heights neighborhood of Upper Manhattan. She spent her life working for immigrants and knew firsthand some of the obstacles they encounter.

She was born July 15, 1850, in Sant’ Angelo Lodigiano in Lombardy, Italy, the youngest of 13 children to parents who were farmers.

While she grew up in a country that was very divided by the secularist and anticlerical “Risorgimento” (“rising again”) movement, the persecution of the Church by civil authorities awakened a missionary spirit in Lombardy, with many priests and religious going to overseas missions.

This was an early love of young Francesca, who made paper boats and loaded them with violets, pretending to send them to evangelize in China.

Divine Providence chose this girl, raised mostly by her older and very strict sister Rosa, to overcome odds by becoming a teacher, then a director of an orphanage, then a foundress of the Missionary Sisters of the Sacred Heart, then a missionary — not to China where her patron saint, St. Francis Xavier had dreamed of evangelizing, but to the wilds of America, the streets of New York, Chicago, Denver, New Orleans, and Los Angeles.

She was a formidable woman who lived a life of many contradictions.

The girl who feared water crossed the ocean dozens of times; the young woman whose poor health caused a religious community not to accept her founded her own congregation; a religious obedient to the will of the Church who sometimes had to resist the advice of bishops and priests; a saint dedicated to the vow of poverty who learned to negotiate real estate and loans to her favor (and the glory of God); someone who suffered ill health all her life who founded hospitals.

No wonder Father Segundo Galilea, in his biography of the saint, chose a paradox famously described by St. Paul as a title: “In Weakness, Strength.” 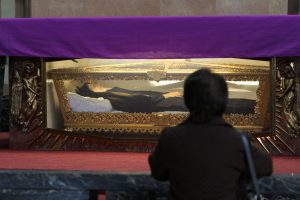 A woman prays before the body of St. Frances Xavier Cabrini, which rests in a glass casket under the altar in the saint's shrine chapel in the Washington Heights section of New York City. (GREGORY A. SHEMITZ/CATHOLIC NEWS SERVICE)

Pope Leo XIII supposedly told her, “Go not to the East but to the West,” and although St. Pope Pius X encouraged her work with Italian immigrants, her mission became much broader than that.

At the urging of Bl. Giovanni Scalibrini, Archbishop Michael Corrigan of New York had invited Cabrini to New York to organize an orphanage and a school for children of Italian immigrants. Communication across the ocean was slow and she never got his letter rescinding the invitation.

On her first day in New York after a rough transatlantic trip, she was informed that the archbishop thought she should pack up and go home with her sisters. She firmly told the archbishop that the Holy Father had asked her to accept the mission and that she was going to stay.

From then on, Cabrini’s special charism of leadership was seen in her tremendous success in forming religious sisters to staff all the works of charity she began. In LA, she was inspired to found charitable institutions for the children of Mexican immigrants, founding schools, orphanages, and hospitals.

Her “sisters” would be amazed by the series of providential happenings that they could not resist calling miracles: money discovered at critical moments, donors who appeared on rainy days, real estate suddenly available, powerful people (including prelates) who abruptly dropped opposition to projects.

Cabrini said she did the preliminary work of discerning the location and the Sacred Heart had to come up with the funding. Jesus never failed to do his part.

Like all saints, she had a network of allies. She met and counseled a kindred spirit in St. Katherine Drexel, who founded the Sisters of the Blessed Sacrament to work in education with Native Americans and African Americans. Both were concerned for the people on the margins, and both would have much to say to contemporary American Catholics.

An old priest in Cleveland told me that Archbishop Edward Hoban of Cleveland had once said that he knew Cabrini and that it was better that some saints go to heaven because they make things rather difficult for us here on earth.

Tell that to the governor of New York and the mayor of New York City, who today are at loggerheads about honoring a woman whom their Italian ancestors must have revered.

Although Cabrini had received the most votes to be recognized with a statue as a woman who helped “build” the city, the mayor’s wife chose another candidate for the honor. The Diocese of Brooklyn responded by sponsoring a march in her honor Oct. 6.

I can imagine the unflappable saint serving both men one of her well-known quotes: “It is difficult to straighten what has become crooked.”

While the saint is still encountering prejudice by the secular establishment, I think it worse that even Catholics ignore her memory, especially because of the echoes of antipathy to poor immigrants that we see and hear today. 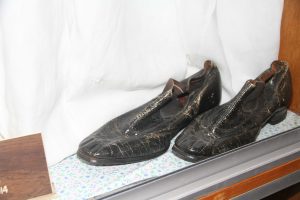 There is a little museum in the St. Frances X. Cabrini Shrine in New York City. It includes a white zucchetto given by Pius X in token of his esteem of the Italian nun and other mementos.

The item that struck me the most was a pair of the saint’s beat-up shoes, maybe a size four, obviously worn out by Cabrini’s missionary labors. She was a bit of a Mother Teresa of Calcutta of her day, founding a congregation with exponential growth, crossing oceans and national borders, dealing with all kinds of people and communicating her love for Christ to multitudes.

Galilea does not hesitate to call her a mystic caught up in a whirl of activity. “Give me your grace, most loving Jesus,” she wrote in a prayer, “and I shall run after you to the finish line, forever. Help me, Jesus, because I want to do this with burning fervor, speedily.”

I had begun my pilgrimage to Mother Cabrini’s tomb in the subway, but I didn’t realize how appropriate that was until I learned that it was mostly Italian men who dug the tunnels of New York’s first subway line, receiving $1.25 for 12-hour days.

Mother Cabrini cared about the children of those Italian laborers, just like she cared about the children of the Italian miners in Pennsylvania and Colorado, and those of immigrant agricultural workers in Louisiana. And when those men or their wives got sick, she wanted them to be able to go to a hospital where they would receive proper care. She is an American Catholic heroine.

For Cabrini, care for immigrants was about family life. She would not miss the fact today that much of the problem of undocumented immigrants is about the reunion of families, something complicated even further by the blizzard of documents and years of delay facing parents who just want to raise their own children in the land they have adopted as their own.

Many Mexican immigrants pray to St. Toribio Romo as they make their arduous journey to our country. He was a holy priest martyred during the persecutions in Mexico associated with the Cristero War (aka “La Cristiada”).

However, one would wish that more immigrant families would know about and invoke the intercession of Cabrini. She was not only an immigrant, but a citizen and the first canonized American saint.

Her personal connection to LA should appeal to the people of Southern California and especially those who, like her, love Jesus and confide in his Sacred Heart. At one point in her prayer she felt that Jesus exchanged his Heart for hers and told her to “use my heart from now on.”

May the prayers of St. Frances Xavier Cabrini make that happen for us.