City people are notoriously suspicious. Urban populations shift, people come and go. When every arrangement is temporary, it’s difficult to form bonds of friendship and trust.

And over the last few centuries we in the West have become increasingly urbanized.

In societies that never settle, we lose the skills and habits required for trust. We do not trust our neighbors, our leaders, our institutions. We can extend our wariness even to God, treating him as just another transient living next door.

In the first year he was pope, 2005, Pope Benedict XVI began a series of Wednesday Audience talks on the psalms, the Hebrew poems and songs that constitute the largest book of the Bible.

Pope Benedict was actually resuming a series St. Pope John Paul II had left unfinished at the time of his death. But Pope Benedict’s interpretations are distinctively his own. As he read deeply in the Book of Psalms, he found trust to be a dominant theme.

The psalms are an effective remedy, he said, to modern world-weariness and cynicism. He described our situation in bracing terms as a twofold crisis. There is “the external crisis of loneliness, irony and contempt of believers” along with “the interior crisis that consists of discouragement, mediocrity and weariness.”

The psalms, and Psalm 125 in particular, tell us “that if we have trust, we are stronger than these evils.”

But trust is not something we can simply choose. Trust must be earned; the objects of our trust must prove themselves to be trustworthy. 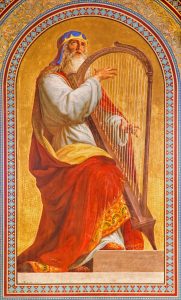 The psalms themselves bear witness to the moral failure of earthly institutions. Psalm 146 famously counsels: “Put not your trust in princes.” And the authorship of half the psalms is attributed to King David, a ruler chosen by God who nonetheless fell into the grave sins of adultery, murder, and the prideful accounting of a census — incited by Satan himself (1 Chronicles 21:1).

In doing evil in these ways, David violated the trust of his people. He weakened his office and left the nation vulnerable to its enemies. He was hardly a credible spokesman for the value of trust.

He himself admitted as much. Psalm 51, addressed directly to God, is an abject apology for his wrongdoing. And Psalm 118 (though not explicitly attributed to David) makes an important distinction: “It is better to take refuge in the LORD than to trust in princes.”

Only God, it seems, is worthy of trust. Everything else in the universe is flux and change. The skies and seas are impressive, but they are unreliable and unpredictable. Only God is unchanging. Only God simply is.

Pope Benedict noted that, from the very first sentence, Psalm 125 “proclaims the stability of ‘those who put their trust in the Lord.’ ” The psalmist compares their strength to the firmness of Mount Zion, which “cannot be shaken.” Pope Benedict observed: “This is obviously due to the presence of God,” who, according to Psalm 18, is “rock, fortress, savior ... refuge, shield, mighty help, stronghold.”

God alone is trustworthy, it seems. Thus, the psalms exhort their hearers to “Remember the wonderful works that [the LORD] has done, his miracles” (105:5). They invoke the call of Abraham, the liberation of Israel from slavery, and the conquest of Canaan. These were manifestations of divine power, enabling the faithful not merely to escape death, but to emerge triumphant against all earthly odds.

The proof of this is in the opening line of the psalm that Jesus quotes upon the cross: “My God, my God, why have you forsaken me?” (Psalm 22:1). That psalm expresses the most desperate condition of a human being: “I am a worm, and no man; scorned by men, and despised by the people. All who see me mock at me” (6–7).

And yet that man of sorrows — at the limit of human endurance — rouses a memory of God’s victories in the past. As Pope Benedict noted, “This initial cry of supplication … is followed in sorrowful contrast by the memory of the past, ‘In you our fathers trusted; they trusted, and you did deliver them. To you they cried, and were saved; in you they trusted and were not disappointed.’ ”

Psalm 22, which began with a cry of dereliction, ends with thanksgiving, confidently offered in advance for the Lord’s deliverance. For the psalmist and for Jesus, the ending is never in doubt.

The psalms, as Jesus knew, do not ask anyone to trust blindly. They propose a reasonable trust, an inner certainty based on God’s consistent performance in the past.

God is trustworthy, say the psalms, even though every earthly power is capable of corruption.

Nevertheless, the message of the psalms is not a counsel to abandon the world and scorn every institution.

For generations, the people of Israel suffered because of their king’s moments of infidelity. Because he was their leader, he was responsible for their well-being. Because he had sinned, he brought disaster not only upon himself and his heirs, but also upon his subjects.

Because he occupied a sacred office, moreover, he brought scorn upon God.

David’s sin made rebellion inevitable. But God did not bless those who rebelled against the House of David. Their guilt was as plain as his. Though many of the kings were unfaithful, their office remained holy and guaranteed by divine institution. Those who rejected David’s authority — compromised as it was — placed themselves in opposition not only to David, but to God.

Salvation could be found only in Israel, even when the kings of Israel were derelict.

The God revealed in Israel — the God we know through the Church — has established his presence in human history, not because of our earthly heroes and leaders, but in spite of them.

We show our trust in God by our steadfastness among his people, acknowledging his anointed leaders, even when it is very difficult to do so.

Pope Benedict noted that Psalm 119 moves through the Hebrew alphabet, and its unifying theme is trust. Everywhere there is acknowledgment of darkness, grief, and lamentation; and yet also “the certainty of divine grace and of the power of the word of God.”

The psalms teach us how to trust not only in good times, but at any moment in history. God does not abandon his people — his assembly, his Church — even when kings and priests abandon God.