“So what kind of theology exactly do you do?” is a question I sometimes get.

My answer — “Mariology” — is sometimes greeted with surprise, and occasionally mild amusement from some fellow theologians. Marian dogmas are central to our Catholic faith, veneration of the Blessed Virgin Mary has long been among the Church’s spiritual treasures, and devotion to her thrives in the global Church. Yet the number of U.S. Catholic theologians who specialize in teaching and writing about Mary is low.

Over the month of May the topic of the Blessed Mother has been much on my mind. Since the 13th century, Catholics have dedicated the month to Mary. In addition, I’ve just returned a memorable pilgrimage to Lourdes, in the excellent company of the Order of Malta.

I’ve sometimes had to explain to non-Catholics that we do not worship the Virgin Mary but rather pray to her with deep veneration.

Manchester University’s John Rylands Library is home to a scrap of Egyptian papyrus that experts date to about 250 AD and which contains the words in Greek, “Mother of God (Theotokos) hear my supplications: suffer us not to be in adversity, but deliver us from danger.” This is an early version of the prayer which Catholics know as “Sub tuum praesidium” or “Beneath thy protection.” This tiny fragment shows that by the middle of the 3rd century, Christians were seeking Mary’s protection. Writing in the same period, the Church Father Origen taught that on the Cross, Jesus entrusts the care of all his disciples to his Mother..

For our Catholic faith, paying due homage to the Virgin is not an optional extra that can be passed over.

In the 8th century, St. John of Damascus wrote that the title Theotokos “contains the whole mystery of the Incarnation.” Addressing Mary as Mother of God affirms that Jesus was both human (as his mother truly gave birth) and God. The Orthodox theologian Father Georges Florovsk wrote that “to ignore the Mother means to misinterpret the Son.” Without a Mother, there would be no Son. Without the Incarnation, there would be no salvation.

Before the Second Vatican Council, Mariology and Marian devotional life were flourishing enterprises that included Marian processions, sodalities, May crownings, and congresses. The National Shrine of the Immaculate Conception in Washington, D.C., was completed in 1959 thanks to hundreds of thousands of small donations from across the US. 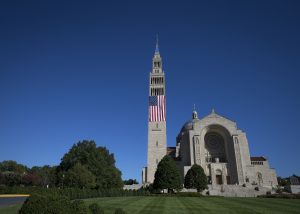 The National Shrine of the Immaculate Conception in Washington. (CNS photo/Tyler Orsburn)

It is hard to imagine such a large-scale project honoring the Virgin Mary being launched today.

At the closing session of the Second Vatican Council, St. Paul VI revived an ancient title, “Mary Mother of the Church.” (To my ears, this lovely Marian title evokes the words of Our Lady of Guadalupe to St. Juan Diego “am I not here, who am your Mother?”) But in the years immediately following as devotions were abandoned and Marian altars and statues removed from churches, it seemed that — at least many English-speaking and middle-class sectors of the US Church — Mary disappeared almost overnight from Catholic life and spirituality. At a time of new ecumenical enthusiasm, the centuries-old world of Marian art, music, literature, and architecture suddenly seemed to be ill-fitted to a Church undertaking renewal. Mariology was abandoned as a respectable academic subject.

But the Council ended almost 60 years ago. We now inhabit a post-post — perhaps even a post-post-post — Vatican II Church, one which is at its most vibrant in Africa and Asia. In those places, Marian devotion has continued to flourish, as it also does in the Filipino, Latino, and Vietnamese communities in the U.S. Church. Internationally, the great pilgrimage centers of Lourdes, Fatima, and the Basilica of Our Lady of Guadalupe remain astonishingly vibrant.

Mariologists know the phrase “ubi Maria, ibi ecclesia” — “where Mary is, so is the Church.” Wherever the Blessed Mother is loved and praised and her protection sought, the Church is strong.

I am happy that the last 20 years has seen a gradual but [definite renewal of theological interest in the Virgin Mary. Because Mariology is firmly rooted in tradition, it is open to new perspectives. Today this field is a bit like a railroad junction where many different lines converge, from places near and far, familiar and new. The world's largest collection of printed materials about the Virgin Mary at the University of Dayton has over 100,000 books and many more pamphlets and audiovisual materials. Each year it acquires many more as new materials appear in print. New perspectives from such fields as feminist theology and cultural studies, along with the work of scholars in Latin America and Asia, have all enriched the study of the Virgin Mary.

The field is also ecumenical and inter-religious. Orthodox Christianity has always maintained its strong emphasis on Marian theology and devotion. Now there is also a lively interest in Mary in some Protestant quarters. Scholars have explored Mary’s Jewish identity. Muslims have a special interest for Maryam, the only woman named in the Quran.

In over 20 years of teaching university students at all levels in the U.S. and the UK, my favorite class has always been the theology and culture of the Virgin Mary. The Yale historian Jaroslav Pelikan refers to the Blessed Mother as a pontifex — literally, a bridge-builder. Religiously, my students have been across the map: Catholics of all stripes, Protestants, Orthodox, Muslims, Jews, Hindus, many who are “spiritual but not religious,” agnostics, and convinced atheists. During those courses, even students initially hostile to Catholicism have consistently warmed to the figure of the Blessed Mother — and in the process gradually become more open to the Church.

Where Mary is, so too is the Church. And wherever the Church is gathered in prayer, as in Acts 1:14, the mother of the Church continues to be there, quiet and faithful as ever. May she continue to bring together our warring world, “suffer us not to be in adversity, and deliver us from danger.”