“Life imitates art,” said Oscar Wilde in his essay “Decay of Lying,” turning Aristotle’s saying on its head. Sometimes Wilde was a prophet.

Case in point: a May 31 article in Bloomberg Businessweek began by announcing, “As the tech industry has matured, people in Silicon Valley have become obsessed with developing ways to stop the human aging process.”

It is a phenomenon that recalls Aldous Huxley’s novel of Southern California, “After Many a Summer Dies the Swan.” First published in 1939, and perhaps inspired by the figure of William Randolph Hearst, the novel is about a wealthy tycoon, Jo Stoyte, who pays for the research of a quack scientist named Doctor Obispo to find the secret of immortality.

Some of the tycoons of the Silicon Valley, according to Bloomberg Businessweek, unnamed in the piece, began experimenting with “really long bike rides and intermittent fasting” and progressed to “taking dozens of pills every morning, or injecting stem cells into their brain [sic], or infusing their body with the blood of the young and virile.”

The goal is what is called “life-extension,” exactly what the millionaire Stoyte seeks in Huxley’s novel. Stoyte eventually finds out about an English lord, the Fifth Earl of Gonister, who discovered that eating fish viscera prolonged life. Eventually, the millionaire finds the earl, who has shrunken to an ape-like state and is hidden in the basement of an English estate. He has found immortality, but it has taken a frightening form.

The novel’s title comes from a poem by Tennyson about Tithonus, a Trojan prince in Greek mythology who was kidnapped by Eos, the goddess of the dawn. Eos, who was in love with Tithonus, begged Zeus to give the young man immortality. She neglected to add eternal youth to the request.

The man does not die but is so withered he eventually has no strength and only babbles ceaselessly, becoming a cicada. Tennyson’s poem has Tithonus reflecting:

Man comes and tills the field and lies beneath, / And after many a summer dies the swan. /

Me only cruel immortality / Consumes: I wither slowly in thine arms.

What price immortality? The Greek myth is really a cautionary tale for all of us. As medicine prolongs life, vitality becomes an issue. 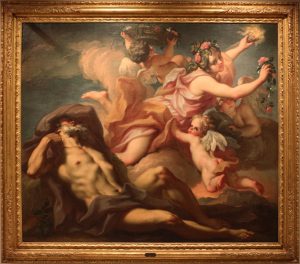 Scientists are studying the aging process in dogs, the Bloomberg article reports, because the two species have “co-evolved” according to a woman who has a startup called “Cellular Longevity.” She has raised $11 million and projects trials of two anti-aging drugs soon.

She is involved in a growing field of research. Part of this involves the medicine sometimes called rapamycin, developed from a bacteria found in the soil of Easter Island. Rapamycin is used for cancer patients as an immunosuppressant, but there are some people experimenting with low doses to stop aging.

Life-extension experimentation with dogs is a serious project. We live in an age when puppies compete with babies for sympathy. So, it is natural that some 30,000 dog owners are cooperating with a research project, backed with a grant of $25 million from the National Institutes of Health (yep, your tax dollars at work). At least 200 “middle aged” dogs will be given rapamycin doses to see if they can retain their vigor. Doggy immortality as a national project!

If this sounds like science fiction, perhaps you have read or heard of the novel by Robert Heinlein called “Methuselah’s Children.” In the novel, selective breeding has produced a clan of people who eventually have an average lifespan of 150 years. They hide this by faking their own deaths and maintaining a secret connection with one another.

A critic of Heinlein’s writing calls the theme of “escaping death” as very important for the science-fiction writer.

Escaping death is certainly close to denying death. As a pastor I see that our culture has become more and more diffident about accepting death. Even in my mostly blue-collar parish, I see important changes in the American way of dealing with death.

Wakes are declining, funeral Masses are, too. Cremation has become very popular, and not just because of the outrageous expense of some funerals. “Cremains” are kept at home or thrown into lakes and rivers. Disneyland has protocols to guard against people depositing the cremains of relatives at the amusement park, a happening that occurs about once a month according to an article published in 2018.

People are fabricating jewelry to hold ashes of relatives or make them into some kind of crystal “death diamonds,” I call them, to be worn on your neck, fingers, or ears. I have seen these advertised at Catholic funeral parlors.

Death is hard for people to accept and so it is disguised in many different ways. One way is the pursuit of the Fountain of Youth. It is a myth that Ponce de Leon sought that, but it is certain that many men and women in America, especially the former (I’d rather not get into details) are seeking eternal youth. How much has this to do with the fear of death?

If you ask people whether they want to die, most will say no. The sick and the traumatized might express a death wish, and despair has certainly gained a bigger place in our culture with euthanasia activists and increasing suicides. But the majority of people want to live. That includes Christians who want to live forever.

They want to go to Jesus, who, as the Swiss theologian Hans Urs von Balthasar wrote in his book “Theological Anthropology,” never experienced old age and promises spiritual eternal youth. We hope for an eternal life that is not like Tithonus’ immortality of withering away, but a new kind of life, as different from this one as a seed is from a plant, according to St. Paul.

I would recommend that some of the titans in Silicon Valley, especially those who are getting unnecessary transfusions of blood and hoping for some earthly paradise of the aged, to read “After Many a Summer Dies a Swan.” After that, they should be ready to take a look at the New Testament.