Since 1949, the month of May has been observed as Mental Health Awareness Month in the U.S. The tradition was started by the National Association for Mental Health (since renamed the Mental Health Association) and is marked by outreach efforts, media campaigns, and greater attention to mental-health resources.

Coincidentally, May is also the month the Catholic Church celebrates a saint whose intercession has long been invoked by people suffering from depression and anxiety.

St. Dymphna was the daughter of a pagan king and a Christian mother in 7th-century Ireland. A  woman of great devotion to Christ, she took a vow of chastity at a young age. After her mother’s death, her father’s mental health declined to the point that he tried to take Dymphna as his wife.

Tradition holds that Dymphna fled to the town of Geel in present-day Belgium, where she founded a hospital for sick and poor locals. Her father eventually discovered her and beheaded her when she once again refused his advances. Pilgrims who traveled to the young martyr’s tomb (and later, a church built in her honor) reported healings from mental illness and epilepsy. Her feast day is May 15.

Deacon Shoener, whose own daughter died in 2016 after a life-long struggle with mental illness, is the founder of the Association of Catholic Health Ministers. He sees saints who suffered from mental illness as “uniquely joined to Christ,” including St. John of God, a Portuguese soldier during the 16th century who underwent a profound spiritual conversion in Spain. 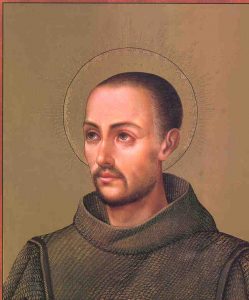 While hearing a sermon from his spiritual director, St. John of Ávila, St. John of God had an apparent severe mental breakdown and was sent to a psychiatric hospital in Granada, Spain. He eventually recovered and spent the rest of his life serving the poor and sick as a religious brother, but reportedly suffered greatly from the stigma of mental illness.

“The reality is that people who live with a mental illness can have deep and profound insights into suffering and the mercy of God,” Deacon Shoener said. “God’s grace is not limited by any condition.”