Given that the news was so unexpected from a figure such as Vanier, many Catholic experts and admirers pondered deep questions, such as just how widespread this form of manipulative abuse of adults is within the Catholic Church; the speed at which such towering figures as Vanier are popularly declared as saints; as well as the complex intersection of sin and virtue, as Vanier is someone who clearly exhibited both deviance and inspiration.

Cristina Gangemi, an expert in the pastoral care of people with intellectual disabilities and a longtime admirer of Vanier, said his misconduct is the opposite of “the values Jean Vanier otherwise stood for.”

“All humans have the capacity for evil, for sin, to fall. All of us. What he did was deviant. What he wrote is what he otherwise stood for,” she said, stressing that delving into this paradox is a task that Catholic theologians will have to tackle, though it is still too early to do so.

Similarly, Father Daniel Hess, a Cincinnati priest currently writing a doctoral thesis on the reception of the Eucharist by people with disabilities, and who himself has an intellectually disabled sister, voiced his sadness at hearing the news, lamenting that now “I can’t cite Vanier without his comments on human dignity being a little tainted.”

“The principles remain true. He says many true things; but the credibility of his voice is lessened, which is very sad,” he said, voicing his belief that with time, himself and other admirers will be able to look at Vanier’s life and works and still recognize “what is life-giving and good,” while also “acknowledging the hurt he also caused and imperfections of Jean as a man.”

Yet for Gangemi, Father Hess, and many others, this is a task for the future. Now, most are still recovering from the shock of the news.

Born in Geneva, Switzerland, to Canadian parents in 1928, Vanier initially pursued an academic career, but later abandoned that path and, after meeting a French priest, he came into direct contact with people living with various disabilities.

As a result of his experience with the disabled, Vanier invited friends to come live with him and several disabled persons in France, launching what was to become the international L’Arche movement.

In 1971, Vanier also co-founded the Faith and Light movement, focused on people with learning disabilities. Since then, L’Arche has spread to more than 37 countries, and Faith and Light to around 80.

When Vanier died in May 2019, Pope Francis, while returning from a pastoral visit to Bulgaria and Macedonia, hailed Vanier as “a man who knew how to read the Christian efficiency of the mystery of death, the cross, of sickness, the mystery of those who are disrespected and discarded by the world.”

“He didn’t just work for the least of us, but also for those who, before being born, there is the possibility of condemning them to death,” the pope said, calling Vanier “a great witness.”

However, on Feb. 22 L’Arche International issued a statement announcing the shocking news that after receiving several credible complaints that Vanier had sexually abused multiple women, it conducted an independent, internal investigation that found Vanier to have engaged in coercive sexual relationships with six women from 1970 to 2005. 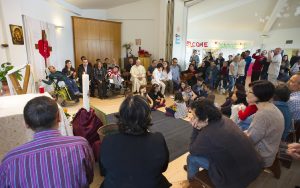 Jean Vanier, in a file photo, met Pope Francis at the Vatican March 21, 2014, during a trip to Rome to mark the 50th anniversary of L'Arche, the international federation of communities he founded where people with and without intellectual disabilities live and work together. (Catholic News Service/Nancy Wiechec)

The inquiry, launched by L’Arche in 2019 and carried out by the independent, U.K.-based GCPS Consulting group, found that Vanier had sexual relations with six adult women who were seeking his spiritual counsel. While none of them were disabled, the statement described their lives as having been significantly impacted by the coercive relations with Vanier.

The statement also said Vanier’s behavior was found to be similar to the deviant practices of Father Thomas Philippe, who Vanier had long seen as a spiritual father. Father Philippe underwent a canonical trial and was condemned by the Vatican in 1956 for committing several acts of sexual abuse against women. He was subsequently barred from ministry and offering spiritual direction.

In the wake of these revelations, Cardinal Thomas Collins of Toronto condemned Vanier’s “very disturbing behavior,” saying the news “is tragic and heart-wrenching.”

Offering his prayers for the victims amid their intense suffering, Cardinal Collins said “a ray of light” can be found “in those who so faithfully serve in L’Arche communities worldwide and have dedicated their lives to friendship, care, and love.”

In a statement issued by the Canadian bishops’ conference after news of the inquiry’s findings went public, the bishops called the results “shocking,” saying it is “all the more difficult and incomprehensible given that Mr. Vanier had a profound influence on the way people with mental and physical disabilities are perceived and treated today.”

His writings, they said, “have had a positive influence on people’s lives within many different cultures and languages,” making it that much more difficult to reconcile his misdeeds with the good that he sowed.

“Nonetheless, any harm that was done cannot be excused,” they said, calling abuse “an appalling manipulation of trust and is always to be condemned. In any form, it is unacceptable.”

The bishops commended both the courage of the victims who came forward, and the leadership of L’Arche for being unafraid to initiate the inquiry into the allegations.

They stressed the need to support L’Arche as it absorbs the impact of the revelations around the globe, insisting that despite the misdeeds of their founder, the communities are “devoted to helping the intellectually disabled and their families based on the principles of love, friendship, community, and the dignity of the person.”

“As sins and injustices are denounced, there is also an urgent duty to remember and acknowledge the life-giving, selfless and compassionate ministry which the members, volunteers, and leadership of the organization have brought to the lives of so many and for decades,” they said.

As of this week, the Vatican itself has not issued a statement regarding the inquiry or its findings.