The U.S. bishops gave their go-ahead to two dioceses to continue their efforts to make their case for a priest and a brother to be considered for sainthood.

The men are Father Joseph Verbis Lafleur of the Diocese of Lafayette, Louisiana, an Army chaplain who died in World War II, and Leonard LaRue, a naval captain who later became a Benedictine monk named Brother Marinus. They are revered for their heroism in World War II and the Korean War, respectively.

Their causes were heard June 17, the second day of the bishops' June 16-18 spring meeting, held online.

Using the polling feature on the Zoom online meeting service, each cause received 99% approval from the bishops, reported Msgr. Jeffrey Burrill, general secretary of the U.S. Conference of Catholic Bishops. A simple majority of bishops voting was required for approval.

The votes were not to endorse the causes, but rather to confirm the bishops "consider it opportune to advance (them) on the local level." 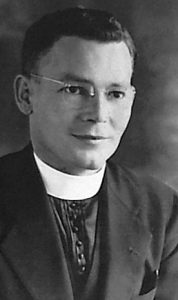 Father Joseph Verbis Lafleur, a World War II chaplain who gave his life while saving others on a Japanese prison ship, is seen in this undated photo. He died Sept. 7, 1944, when a U.S. submarine torpedoed the Japanese ship that he and over 700 fellow prisoners of war were aboard in the Indian Ocean. A priest of the Diocese of Lafayette, La., he is a candidate for sainthood and has the title "Servant of God." (CNS photo/courtesy Diocese of Lafayette) Editor's note: Best image available.

Father Lafleur was ordained a priest in 1938 and joined the Army Air Corps in 1941, about six months before the start of World War II. His unit was assigned to Clark Air Field in the Philippines, about 60 miles from Manila. The day after the Japanese attacked at Pearl Harbor, they bombed Clark, where the young priest tended to the wounded and dying. Ordered to evacuate by ship, Father Lafleur and other attack survivors were bombarded again by the Japanese.

Now a prisoner of war, Father Lafleur served as his fellow prisoners' chaplain, helping redistribute scarce food and clothing to men who needed it most desperately, and fought one healthy POW who had been caught swiping food.

He died aboard an unmarked Japanese ship headed for Japan that had been torpedoed by an American submarine. Of the 750 POWs crammed onto the boat, only 80 made it safely to shore. Father Lafleur refused to go up the ladder for a chance at survival, instead helping other men up the ladder.

The priest's mother said she knew he was dead even before receiving official notification, because the pine tree she had planted in 1927 after her first seminary visit to see her son died the same day the Japanese ship went down.

Bishop J. Douglas Deshotel of Lafayette, Louisiana, in a prerecorded message, said Father Lafleur's heroism won him a Purple Heart and a Distinguished Service Cross while he was alive, and a second of each award posthumously. "His memorial is more intangible, but more lasting -- he salvaged souls through the valley of the shadow," he added.

Archbishop Timothy P. Broglio of the Archdiocese for the Military Services said Father Lafleur "exemplifies what the priesthood is all about."

LaRue was at the helm of the Merchant Marine ship Meredith Victory in 1950 when it rescued 14,005 Korean refugees who were fleeing a Chinese military onslaught. It is estimated there are now 1 million Koreans descendants of those refugees, including current South Korean President Moon Jae-in.

The ship made a 450-mile journey safely through mine-infested waters in the Sea of Japan before reaching Geoje Island, where the passengers disembarked, including five children born during the voyage.

Not long after he left the Merchant Marine, LaRue joined the Benedictine Monks of Newton, New Jersey, and took the name Brother Marinus in 1954. He rang the bell each morning to wake the monks for prayer, and did less celebrated tasks, like dishwashing and working in the abbey's gift shop.

Supporters of his cause say he was involved in a second miracle. In 2000, the abbey was near closure due to lack of monks. The following year, the monks of Waegwan Abbey in South Korea agreed to send seven monks to New Jersey. One of them, Benedictine Father Antonio Kang, was one of the refugees saved by LaRue. The mission to send monks from South Korea was approved that Oct. 12, and Brother Marinus died two days later.

Auxiliary Bishop Elias R. Lorenzo of Newark, New Jersey, himself a Benedictine, said June 17 he was at Brother Marinus' funeral. "Koreans from all over the country, as well as from South Korea, came to honor him and express gratitude for his heroic work in the Merchant Marine," he recalled.

In a prerecorded message, Bishop Kevin E. Sweeney of Paterson, New Jersey, said his predecessor, retired Bishop Arthur J. Serratelli, had been contacted by Father Sinclair Oubre, national director of the Apostleship of the Sea, about LaRue. "I can see why Bishop Serratelli acted so quickly," Bishop Sweeney said.

Brother Marinus would be "the first contemporary mariner to be beatified," he added. The sainthood cause, Bishop Sweeney said, "will inspire many seamen and mariners to pursue a life of holiness."

Consultation with other bishops is one of the requirements in advancing a sainthood cause, said Archbishop Jerome E. Listecki of Milwaukee, chairman of the USCCB Committee on Canonical Affairs and Church Governance.