Why Catholic men around the world are ‘rallying’ behind the rosary

Many Catholics of a certain generation in historically Catholic countries like Ireland can still remember the nightly ritual of the family rosary. Mother, father, and children would interrupt whatever they were doing, gather in the living room and pray their decades, often kneeling.

Today in Ireland, where the faith has been hit hard by revelations of sexual abuse by clergy, it’s harder to find that sort of devotion. But the Marian prayer may be enjoying a revival, part of a worldwide trend of public gatherings to pray the rosary.

In particular, since last fall, recitations of the rosary in the public squares of major cities of both Northern Ireland and the Republic of Ireland have been drawing hundreds on the first Saturdays of each month.

What’s most surprising isn’t just that such public acts of prayer are popping up where they are, but that they are being organized and attended almost exclusively by men.

Men gather in a public square in Derry, Northern Ireland, to pray the rosary “in reparation for the insults and blasphemies against her Immaculate Heart.” (Patrick McCrystal)

It’s not just Ireland, however. There are more and more public gatherings for the rosary, in the United States, Canada, the U.K., France, Italy, Croatia, Lebanon, India, Australia, and other places. Earlier this month on Feb. 5, a group of 25-30 men gathered in a public park in Austin, Texas, for the city’s inaugural “rosary rally.” The men plan to continue gathering at a different location each month.

The people gathering for these public rosaries do so for a variety of intentions: protection of life and the traditional family, a renewal of faith in increasingly secularized societies, healing of social divisions, and an end to the COVID-19 pandemic.

According to several people Angelus spoke to, the trend got its start in Poland. Maciej Maleszyk, of the Piotra Skargi Institute in Warsaw, said that the institute organized a public rosary back in 2009, in opposition to a “gay pride” parade in the Polish capital. Then, in 2017, to mark the 100th anniversary of the Virgin Mary’s apparitions at Fátima, the institute, which is affiliated with the conservative Tradition, Family, and Property movement, again organized public rosaries.

Some of the motivations for some of the rallies are not shared by all Catholics. One campaign, “Rosary at the Borders,” was organized in Poland to pray for protection from what was perceived as the spread of a militant brand of Islam as large waves of refugees from North Africa and the Middle East fled to Europe, many escaping war in Syria and oppressive conditions in other countries.

But Maleszyk said he feels the years of public prayer have yielded tangible results. He knows a man, for example, who used to mock the group praying in public but now has joined in praying the rosary in front of a hospital that was performing abortions.

“At the institutional level, there were groups praying the rosary in front of hospitals that performed abortions, and at least several of them stopped performing abortions,” Maleszyk said. At an even higher level, he pointed out, Poland’s highest court last year ruled that eugenic abortion is against the constitution. 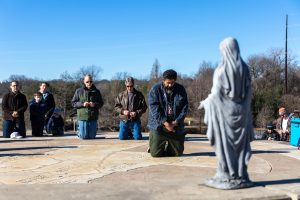 In response to what was happening in Poland during the Fátima centennial, Father Marius O’Reilly, a priest in Cork, Ireland, got together a team and started a similar initiative, “Rosary on the Coast.” People were encouraged to go to coastal areas, or if they were too far from the sea, to lakes or rivers, and, in a sense, surround Ireland with the rosary, begging God to protect the country from the forces of secularization.

Father O’Reilly, who now publishes a magazine called Totus Tuus, covering all sorts of rosary-related developments worldwide, said that since “Rosary on the Coast,” activities such as “Rosary at the Grottoes” in the month of May and rosary-themed conferences have “ignited a lot of people to start praying the rosary again in Ireland.”

Then, last fall, Patrick McCrystal, director of Human Life International (HLI) in Ireland, inspired by photos on social media of hundreds of men in Poland praying the rosary in public, began a project called the Men’s Public Rosary of Reparation and Repentance.

McCrystal discussed it with his colleague at HLI, Owen Gallagher, and both agreed they could “do something like that.”

“One thing led to another, and we set it up for five dates around Northern Ireland, starting Oct. 4,” McCrystal said.

The initiative, he said, is in response to Our Lady of Fátima’s request for the devotion of the Five First Saturdays, in reparation for the insults and blasphemies against her Immaculate Heart. It has since spread throughout the island.

In a video, McCrystal said that men are praying in reparation for the sins they are responsible for as men, which, he said, have helped bring Ireland to its current state, where secularism prevails and where abortion and same-sex marriage have been legalized. Specifically, McCrystal said, the men are making reparation for the sins of “abortion, contraception, all forms of impurity, reckless driving, dishonesty, and deceit.”

“One of my main comments to the men last month was, ‘If the men of Ireland took proper responsibility initially for the women in their lives, there would be no abortion crisis,’ ” he told Angelus. “Abortion is in one sense a manifestation of men’s irresponsibility. That’s why only men can properly do reparation and repentance. The women can’t do it for us.”

But, he added, “When people repent, God promises to heal our land.” 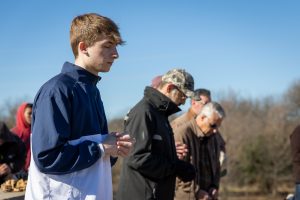 The organizers believe that praying the rosary in public makes it far more effective. Mary “communicated to St. Louis de Montfort that public prayer is far more powerful than private devotion,” McCrystal said. “So we decided to get on our knees and beg God’s mercy for all of Ireland.”

Timothy P. O’Malley, director of education at the McGrath Institute for Church Life at the University of Notre Dame, said there is a long history of such public manifestations of devotion in the Church. But there is a risk, he believes, when they are seen as more political than prayerful.

“Prayer and political protests have been linked together before in the past, such as the Solidarity Movement in Poland,” he said. “The dimensions of prayer can’t be overtaken by the protest.” While praying the rosary is a good, he said, such groups should “think about what distinguishes their practice from a typical run-of-the-mill protest. When does prayer cease being prayer, and start being protest more than prayer?”

It’s important to remember, he said, that the Church teaches that prayer and worship are for the glorification of God first and then for the sanctification of men and women.

“You can get that wrong if you start with the sanctification of the world, whether that’s politically or if you forget that your first object of prayer is the glorification of God,” he said.

Here in the U.S., Enrique Suarez also noticed on social media the impressive gatherings in places like Poland and Ireland. He spoke with Angelus right after the first rosary rally in Austin, Texas, Feb. 5, at a park near the capital’s downtown area.

“I was following some pictures of other men’s rosaries around the world,” said Suarez, a native of Mexico who has lived in Austin for a few years. “There was an invitation to start a local group, and I said ‘Why not?’ ”

He contacted Owen Gallagher in Ireland, who advised him on how to choose a place, invite people, and promote the event. Next month, the men plan to pray in front of Austin City Hall.

“Part of our problem in society is that men are not paying attention to their prayer life or involvement in church activities or spiritual life,” said Suarez, a Maronite Christian. “We’re trying to highlight the importance of the domestic Church.” 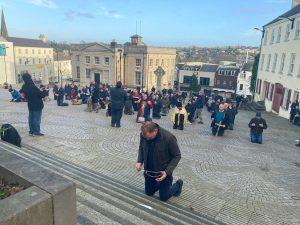 At the same time as the rise of men’s public rosaries, there’s been a parallel movement to get people — men and women together — to pray the rosary in public places on Wednesday evenings. The initiative, begun during the pandemic lockdown by a wine merchant in Austria, is organized in various countries through the cellphone app Telegram. In Lebanon, it caught the attention of Dominic Chikhani.

“Darkness is enfolding mankind on many levels — mainly confusion about faith and all the errors, the sins committed,” Chikhani said in an interview from Beirut. “Christians have no clue about their faith. We’re not judging, but it’s just a fact. They don’t know the way to salvation.”

In Lebanon, which has the highest proportion of Christians in the Middle East, there are now about 100 locations where the Wednesday rosary is prayed, usually in front of people’s houses rather than a public space like a park. With an image of the Blessed Virgin Mary mounted in front of them, even a small gathering reciting the prayer on their knees can make a big impact, said Chikhani, a Melkite Catholic. “It’s an effective tool of evangelization.”

Chikhani said that when he did this in front of his own home, passersby joined to pray with them. He sees the rosaries as an opportunity to be “fishers of men through our rosaries and penance,” and that people who undertake the public rosary “go the extra mile to live the faith, to offer reparation.”

“It’s not just the ‘faith of nice,’ ” he said. “We offer reparation for the salvation of souls. That’s the goal.”

John Burger is a writer at Aleteia and the author of a forthcoming book from Our Sunday Visitor about the leader of the Ukrainian Greek Catholic Church.