The Year of St. Joseph: The start of something bigger?

When Pope Francis surprised us with a Year of St. Joseph last Dec. 8, I felt like it was a gift just for me. I had the precious gift of a loving father when I was a child. Whatever was going on in the world and in my life, I felt protected, I knew who I was. Cruel things happen to kids, from other children and adults that are difficult, and leave scars. But I always knew I had the love of a father who loved me unconditionally. He always wasn’t afraid to tell me the truth. He could, because he was tender about it and I knew he loved me.

My dad’s name was Joseph, and I felt like Pope Francis was giving me a year of thanksgiving to God for the gift of my Joseph, who died over two decades ago now, in the days after Christmas.

Over the course of the year and over the last few weeks in particular, Pope Francis has been talking about St. Joseph and our need to learn from him. He has talked about how we live in a world where we pretend things can be “fluid,” that we don’t need the stability of real relationships. That in God’s providence, he showed us the need for men to be fathers to children in the Holy Family through the protective love of St. Joseph as an adoptive father should not be missed. It can transform how we raise men, what we ask of them and expect of them.

One of the reasons I’m so grateful that I had a loving father is that I know without a shadow of a doubt that it’s the reason I can believe that God is a loving Father to us.

I had just a little taste of it. I remember one particularly difficult time in high school when I was sick with a viral infection that became a lingering cough. I loved studying and it was interfering with my very presence in a classroom. It was annoying and distracting to more than myself.

One day I was home near choking, and it was the arms of my father that got me to calm down from the panic that had led to something like hyperventilation. I was terrified and hated living this way. In his arms in our bathroom, coughing into a sink — a posture of utter weakness and need — I was calmed because I could trust him.

I suspect that’s some insight in how Mary must have felt knowing God had a plan, and an encounter with his providence for providing for mother and child with the presence of a husband and father to do those things that men do best in the genius of complementarity, another gift from God.

We need fathers. And we live at a time when good fathers are both undervalued and few and far between.

In so many ways, I find myself, like I have before in these special years of dedication to a theme or patron, longing for more. Personally, I need the reminder of the gift of my father, even as I will always continue to miss having him to call for advice and wisdom (and practical help about things I should be able to figure out myself!). But also because we all need the example of St. Joseph. Our culture needs it!

Even the very example of a man who will do the will of God, who will believe the impossible that God is capable of, and seeing that a man can be a true father even when he is not biologically the father of his child. We are adopted by God and so to know what adoptive fatherhood looks like in the world, as a participation in God’s fatherhood to us, is critical.

In his apostolic letter dedicated to the Year of St. Joseph, “Patris Corde” (“With a Father’s Heart”), the pope revealed that his desire to write about St. Joseph increased during the COVID-19 pandemic, a crisis that had revealed how “our lives are woven together and sustained by ordinary people, people often overlooked.”

“How many people daily exercise patience and offer hope, taking care to spread not panic, but shared responsibility,” the pope wondered. 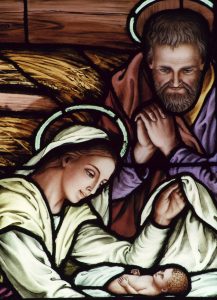 In this “man who goes unnoticed, a daily, discreet and hidden presence,” he continued, we can discover “an intercessor, a support and a guide in times of trouble. St. Joseph reminds us that those who appear hidden or in the shadows can play an incomparable role in the history of salvation.”

My Joseph certainly fell into that category. He was certainly not well known by the world, but beloved by those he knew and served. His funeral Mass drew a standing-room-only crowd. A Catholic schoolteacher and principal, he liked to say that he entered Catholic school in the first grade and never left. Before getting married, he actually studied to be a priest, but left the seminary before the diaconate. Thanks be to God, I have to say, or I wouldn’t be here.

Still, knowing that about my dad’s life gave me a love for the priesthood, and helped me understand that it is about fatherhood, too. And thanks to him, I take praying for fathers of all kinds seriously all these years later.

In “Patris Corde,” Pope Francis asks us to “consider whether we ourselves are protecting Jesus and Mary, for they are also mysteriously entrusted to our own responsibility, care and safekeeping.”

He continues: “The Son of the Almighty came into our world in a state of great vulnerability. He needed to be defended, protected, cared for and raised by Joseph. God trusted Joseph, as did Mary, who found in him someone who would not only save her life, but would always provide for her and her child. In this sense, St. Joseph could not be other than the Guardian of the Church, for the Church is the continuation of the Body of Christ in history, even as Mary’s motherhood is reflected in the motherhood of the Church. In his continued protection of the Church, Joseph continues to protect the child and his mother, and we too, by our love for the Church, continue to love the child and his mother.”

Those words seem especially timely now in the United States, where we face the prospect of the Supreme Court possibly overturning Roe v. Wade. As a country, it seems that we’ve forgotten how to protect both the child and his mother over the last five decades. How many families have been torn apart, or completely destroyed, as a result? And how many young men have no idea what they are capable of — and what women are capable of — and how glorious parenthood can be when it is about true, self-sacrificial love?

I suspect much of the Church hasn’t had a full encounter with St. Joseph as the year winds down. Begin now! There’s the pope’s letter and many books that have been published that are great meditative helps. Ask him with confidence — and urgency — to intercede for us, to help us create a more tender culture that protects women and children. And I’ll keep asking my Joseph, too (I can’t call him on the phone, but I do ask for his help!). Until we, please God, meet again.