‘The goal is love’: Behind the scenes of the LA Archdiocese’s new podcast

On the way home from his psychiatric practice, Dr. John Masko used to stop at St. Mary’s Abbey in Wrentham, Massachusetts, to buy chocolates that the nuns made — and sometimes to attend Mass. On those visits to the Trappistine monastery in the 1990s, he discovered something that changed his understanding of living the faith: a gift he is sharing through the new podcast series, “The Beauty Within.”

Glimpses of the sisters at work and prayer led him to reconsider his assumptions about cloistered nuns, those who live a life of prayer inside their monastery and don’t do ministry in the outside world. He had viewed them as sad escapees from a loveless life. Yet the women he met seemed radiant.

One day around 1996, he overheard a nun laughing with such pure joy that he resolved to investigate the disconnect between his perceptions and their experience. He eventually talked their superior into allowing him to record and publish interviews with the sisters.

He learned that their lives are designed to draw them deeper into love with God, love for the world, and for everyone they encounter. They can’t hide because they are vowed to live together. 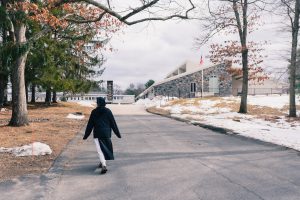 Excerpts from the interviews are the core of “The Beauty Within,” with seven episodes to be released Tuesdays through July 13.

Trappistines are the women’s counterpart to Trappists — formally the Order of Cistercians of the Strict Observance —  contemplatives made famous by the spiritual writer Thomas Merton. Their life is spent within the monastery walls, in a rhythm of prayer and work, with a special commitment to silence.

“It’s a notion of silence that’s more like stillness,” Masko said. “The sisters I spoke with are glib. They are chatterboxes, a lot of them. They are very thoughtful, and have no hesitancy. They are not what you would call shy or quiet people.”

Their cultivation of silence “seemed more like a philosophical concept of being available, of not being distracted by chatter and other sorts of distractions. It’s so you can be available to grow and to love and to pray.”

In the words of Pope Francis’ apostolic constitution for contemplative women, they “live exclusively seeking God’s face, longing to find and contemplate God in the heart of the world.”

Trappistine spirituality is designed to remove distractions and superficial activities, in order to be fully available to love God and others.

Sister Maureen, a New Jersey native who had been influenced by Thomas Merton’s writing, had first entered the Sisters of Mercy, an order known for hands-on service to the poor. But she felt called to a life of intimacy with God.

“I do believe that every human being has desires deeper than they know,” said Sister Maureen, who later served 11 years as Mother Superior.  “And I think they know some of them. But like me and many others, it’s too hard . . . to put them into words. But sometimes, when they see the contemplative life or hear the contemplative witness, they know that they know it deep down. They know that there is something inside them too, that is made for the same.” 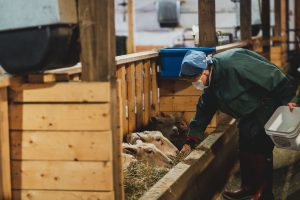 A Trappistine sister at St. Mary’s Abbey in Wrentham, Massachusetts, adds feed to a trough in the convent’s barn. Raising the convent's few dozen sheep are among the sisters' regular duties. (Isabel Cacho)

A quarter century after the interviews, the St. Mary’s website shows a diverse community of more than 30 sisters, ranging in age from 25 to 91. Many photos show sisters laughing as they walk in the woods, make chocolate candy, or tend the sheep that supply wool for yarn and blankets that the sisters also make and sell.

Contemplative monasteries “are really a beating heart of prayer and holiness,” said Sister Germana Santos, a Daughter of St. Paul who serves as delegate for religious in the Archdiocese of Boston.

“These sisters leave the world for one reason only: because they are in love with God who has called them,” she said. “The nuns love God and the people of God. They spend their lives contemplating the face of God and praying and offering their lives for others.”

Though she doesn’t know the individual sisters well, their superior, Mother Sofia Millican, is an inspirational speaker whom Sister Germana recruited to address Boston’s men and women religious on three occasions. At a time of tension and division in both society and the Church, cloistered communities are instruments of healing, Sister Germana said.

“They live in community, seeking to create relationships that are a witness of goodness and mercy, and of accepting one another and of charity. That is a great prophetic sign to the world, which is so bereft, so full of aggression and lacking in mercy.”

The podcast title, “The Beauty Within,” is from Sister Jean, who felt a sudden call as a young woman who was acutely homesick for her native Scotland. While praying in church for peace, she had an overwhelming experience of being in love with and loved by God.

She knew it was a call to religious life, something so far from her experience that she began by looking up “convent” in the phone directory. Her friends and family thought she would snap out of it, but three decades later, the love story continues.

“It’s a life that brings you to the recognition of the goodness and the beauty in everything you come across,” she said.

“We don’t go in for a lot of flowers and statues and so on, like in churches and so on, because the idea was there that . . . you look for the beauty within,” she continued.

“The beauty within is always love.”

Their silence is not isolating.

“We go together to God, ” she said. “The silence is for solitude, for prayer, it’s not just to be kind of separate. ... Our goal is prayer, as much as we can possibly do, and so we kind of give each other a space. You don’t interfere with the other sister by chatting.”

They pray for global issues and for personal concerns that people send to them.

“Now, we take those prayer petitions very, very seriously, because our life is for prayer,” she said.

“We’ve come away not to get away, but to be actually more involved in the world because you have that space to kind of sit back and look and consider and yearn for a better world.”

Masko, whose work taught him that most people fool themselves about who they are, remains struck by the sisters’ authenticity.

He originally sought to produce an audiobook, so listeners could hear the sisters’ turns of phrase and tones of voice. Publishers told him that no one was interested in cloistered nuns. 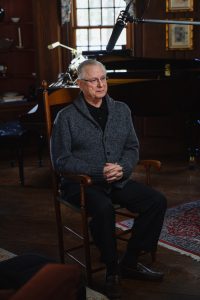 John Masko is interviewed by the LA Catholics digital team at his home in Cumberland, Rhode Island, a 10-minute drive from St. Mary's. (Isabel Cacho)

In frustration, he went to talk to Mother Agnes, the superior.

“She said something like, ‘It’s the will of the Lord right now. Let it go. You don’t know if this is the time. And I thought to myself, maybe she’s right. Maybe this is not the time,” he said. “I just put it on the shelf — way up on top of a 6-foot-tall bookshelf in my son’s room.”

Which is where his elder son, John Masko IV, found it about eight years ago, when he was in college.

In the interviews, “I started hearing words and concepts that were part of my upbringing,” he said.

“The emphasis on love is a learning process. To my dad, that is the ultimate standard of human maturity — having learned to love.”

As someone used to the speed-of-light pace of digital information, John IV was gripped by the focused thoughtfulness of the sisters’ reflections.

“I was struck by the richness of these women’s lives. We are all sort of trained to think that a fast pace and extreme variety of content in our lives is necessary in order to have a fulfilling life. Listening to these interviews, it really brings home how much you are missing in a normal, fast-paced life,” he said.

“These women stay on the same few-acre plot of land their entire life with the same group of people, have services at the same time and the same jobs. They never travel. They never buy much of anything, and yet they seem to have some of the most interesting lives of anyone. They never get bored. There is a weird, inverse proportionality. It may actually be that the more stuff is going on in your life, the more unfulfilling it is because you don’t actually fully absorb anything.”

He thought releasing the interviews during the COVID-19 pandemic would “do a lot of good. People were spending so much time alone in their own cloisters. A lot of people were struggling to figure out how to live with themselves and actually live with the actual people they live with but don’t usually have to spend that much time with.”

A friend from California put him in touch with the Archdiocese of Los Angeles, whose digital communications department produced the podcasts.

As his work comes to fruition, Masko hopes that listeners will gain an appreciation for the complexity of life and the primacy of love.

“If even a soul or two is affected, that’s important,” he said.

The first episode of the Beauty Within podcast launched on June 1. To listen, visit beautywithin.lacatholics.org/.