The chemist and Spanish priest who became El Salvador’s shepherd

The death of Archbishop Emeritus Fernando Sáenz Lacalle of San Salvador at the age of 89 last week has filled me with many reminiscences of the best bishop I ever knew — and the bishop I have known the best.

To understand the surprising complexity of the man Providence chose to shepherd El Salvador’s capital diocese in the wake of a devastating civil war, I think of an anecdote he used to tell about his time as a boy at a boarding school in Spain. Every week he was sent to the stadium with his fellow students to watch the soccer matches.

“I entered and then walked to the farthest exit and left the stadium to go to the movies,” he would recall. Then he would be back at the stadium on time for the bus back to school.

Yes, his imagination was stronger than an interest in sports (later in life, he would read bootlegged Spanish translations of the latest Harry Potter book with what impressed me as childlike glee). But that story also betrayed a fascinating contradiction about him: obedient to a fault, but also prudentially independent.

I worked with Archbishop Sáenz Lacalle for almost a decade as a kind of amanuensis for English correspondence, and then as a factotum in a variety of roles. He lived in quiet retirement from 2008 until his death on April 28. 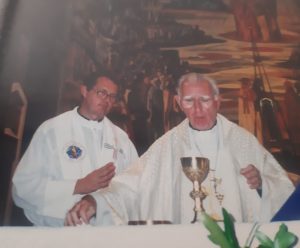 The author concelebrating Mass with Archbishop Saenz Lacalle during his time in the Archdiocese of San Salvador. (Msgr. Richard Antall)

After boarding school, he studied chemical engineering and, although he never practiced it, I saw him stump a representative of a Canadian mining company that wanted to extract the leftover traces of gold in some old mines in El Salvador. There was concern by ecologists of contaminating the country’s precarious water supply and he asked the man, who looked more like a broad-shouldered bouncer in an exclusive club, “You say that cyanate is a by-product of the process of extraction.”

The man nodded, obviously wondering where this was going. “What is the formula of cyanate as opposed to cyanide? And how do you know that it will not filter out of these tanks you are speaking of?” Despite some panicked assurances, the representative never got back to him on that.

The chemical engineering student, however, went to Rome to study theology after graduating college. His doctoral dissertation was about St. Paul’s line to the Colossians about how his suffering (and by implication ours) can “complete what is lacking in the sufferings of Christ” (Colossians 1:24-26). Although he consulted with the great Thomist theologian Father Réginald Garrigou-Lagrange, OP, to write it, he did not publish it for lack of funds. But the insight of our participation in the redemption by the carrying of one’s own cross was something he lived out.

The young Opus Dei numerary was later ordained and sent far from his home country. In El Salvador he was involved in youth ministry, as well as in Christian formation, retreats, and spiritual direction. Later, he was called upon to help found a Catholic university in El Salvador, of which he served as vice rector.

Thanks to an extraordinary series of events, he became an auxiliary bishop, then the bishop of the military ordinariate, and in 1995, the first foreign-born ordinary of San Salvador. He succeeded the stalwart Archbishop Arturo Rivera y Damas, who had succeeded the man whose director and confessor Archbishop Sáenz Lacalle had been, St. Óscar Romero.

I remember being surprised that when the archbishop would respond to calls he would identify himself simply as “Fernando Saenz Lacalle.” He was a holy man, prayerful and pious in the methodical spirit of the founder of Opus Dei, St. Josemaría Escrivá de Balaguer, whom he had known since his time in Rome. I cannot forget how punctilious the archbishop was about his time in the chapel and the way he would visit the Blessed Sacrament each time he left and came back to his residence.

At one point during our time together, he asked me to read an enormous biography of Blessed Juan de Palafox, Bishop of Puebla, Mexico, in the mid-1600s and founder of the famous Biblioteca Palafoxiana.

Born in obscurity in Fitero, the next village over from where Archbishop Saenz Lacalle was born, Bishop Palafox rose up the ranks of the Church hierarchy in Mexico. A dispute over episcopal authority, a theme of the Council of Trent at the time, led the Jesuits to work against him and engineer his removal and retirement to a poor diocese in Spain. His cause for beatification was later taken up by the Spanish throne and eventually, St. Pope John Paul II reactivated it and he was proclaimed Blessed in 2011.

I suppose that Archbishop Saenz Lacalle identified with Palafox for many reasons other than the proximity of the respective birthplaces. 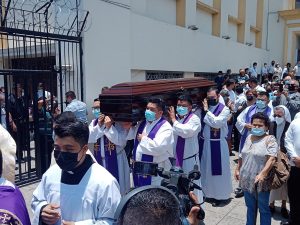 Priests carry the coffin of Archbishop Fernando Saenz Lacalle to the crypt of the cathedral of San Salvador, El Salvador, May 2, 2022. (CNS photo/courtesy Roberto Rivas)

From the beginning, Archbishop Saenz Lacalle was a controversial choice for San Salvador, facing constant criticism and what I would call passive-aggressive behavior by some of the clergy. Once, he showed me an anonymous letter viciously critical of him personally. He knew who the priest who wrote it was, he said, because the priest constantly misspelled the same words when he wrote about other subjects and signed his name.

But despite the venom of his opponents, the archbishop was always cheerful. He could laugh off his critics’ attacks, which came from left, right, and in between. I remember he saw great humor in Herman Melville’s strange tale of Bartleby the Scrivener, whose title character’s recalcitrance was summed up in his repeated line, “I would prefer not to.”

He was scrupulously task-oriented, finished the reconstruction of San Salvador’s cathedral, a very beautiful church but one that cost a great deal of resources and energy. With careful work, he responded to the destruction wrought by two terrible earthquakes in the year 2000. He patiently organized the pastoral work of the archdiocese in the wake of El Salvador’s civil war, visiting parishes, confirming tens of thousands of young people, and blessing innumerable new construction projects while balancing himself on the high wire of Salvadoran politics. Hounded by a reporter for his opinion of an outgoing president’s administration, he said the matter was “very open to opinions.”

I doubt that he himself received a fair judgment in the polarized atmosphere of a country still in a crisis of conflict and identity. He was nevertheless a true leader, guided by his own conscience when others are moved by the opinions of those around him.

“If posterity neglects him, it will pronounce judgment not upon him but upon itself,” said Msgr. Ronald Knox about his friend, the great Catholic writer G.K. Chesterton. The same words are appropriate for Archbishop Saenz Lacalle, a man who never treated his enemies with the unfairness he himself was treated. I don’t even have to write “may” in the formula we use to pray for the deceased. I know he rests in peace.