The case for the crèche

It is indeed an age-old question: how to make worship relevant?

The clergy struggled with it a thousand years ago, and especially at the great feast of Christmas. If Christians don’t understand the scriptural basis of the holiday, all they’re left with is revelry: tinsel and eggnog, to put it in modern terms.

So in the 900s parishes began to develop tropes: short dramatic supplements to the liturgy. A scene would be set on or near the altar, and actors would play the parts in the Gospel story. Sometimes the tropes would be mimed while clergy proclaimed the seasonal readings. Other times they would be acted aloud.

Over time, in some places, these efforts developed into grand productions, with musicians, dancers, and professional performers. The liturgy was eclipsed. The clergy got caught up in the showbiz spirit. And the play became the thing.

In 1210, Pope Innocent III had had enough. He issued an edict forbidding the clergy from acting on stage, and commanded that the holy day performances be moved off church property.

That same year, 1210, coincidentally, the pope approved the founding of a new kind of religious community: a group of itinerant men who lived in poverty and preached Jesus Christ as they wandered. They called themselves the “Little Brothers”: Friars Minor. Their leader’s name was Francis.

Francis hailed from Assisi, just over a hundred miles north of Rome. After a dramatic conversion, he had taken to the streets and roads, gathering followers. He and his “brothers” strove to share the Gospel with immediacy, intensity, and urgency. But they did it in unconventional ways, not in churches, but in the byways of the world.

Innocent III saw Francis’ method, unconventional as it was, as the best candidate available for the much-needed renewal of the Church.

Over the next 10 years, Francis and his brothers meandered through Italy and even went to Egypt with the Fifth Crusade. His band grew at a rate that was astonishing. Francis strove to keep a spirit of simplicity and poverty even as the Little Brothers’ greater numbers won them influence in the Church and in the world.

By 1223, however, it was clear to everyone that the rule of the Franciscans needed to be overhauled. Pope Honorius III oversaw the reform, which required the Friars Minor to become more formalized and institutionalized than Francis had wished. For the first time his band was called an “order.”

The pope gave him permission, perhaps as a consolation, to celebrate the coming Christmas in a special way — an unusual way — a way that would technically violate the ban of his papal predecessor, Innocent III, on the use of sets and actors in worship.

Francis went to the town of Greccio, about halfway between Rome and Assisi, and there he conspired with a loyal old friend named John.

“I wish,” he said, “to enact the memory of that babe who was born in Bethlehem: to see as much as is possible with my own bodily eyes the discomfort of his infant needs, how he lay in a manger, and how, with an ox and an ass standing by, he rested on hay.”

He asked John to plan and prepare such a scene, to be presented on Christmas Eve. (The details are recorded in the two earliest biographies of Francis, by Friar Thomas of Celano and St. Bonaventure.)

John did as his friend had asked. He brought together live animals, with human actors to portray the Holy Family. The baby rested in a real manger, a feeding trough. 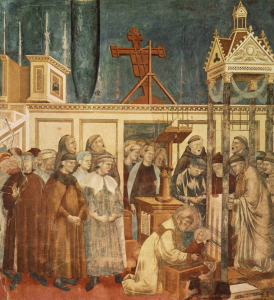 "St. Francis at the Institution of the Crib at Greccio" by Giotto di Bondone, 1295. (Wikimedia Commons)

When Francis arrived he found a crowd of local people gathered around, their torches lighting up the night as if it were day.

Then the local priest came and offered Mass over the manger itself, using it as an altar. Francis, who was a deacon, chanted the Gospel and preached the Christmas sermon.

This is what he had always desired: to share the Gospel with immediacy, intensity, and urgency. He wished to make worship relevant, of course, but not through pageantry and entertainment. He wanted instead to make the word visible. He wanted what God had wanted at the moment of the Incarnation.

The word was not only visible on that winter night. It was audible, tangible, smellable, and memorable.

The word was edible, too. Francis saw the significance of the baby’s placement in a feeding trough (Luke 2:7). The baby Jesus was born in Bethlehem, a town whose Hebrew name means “House of Bread.” The baby grew up to call himself the “Bread of Life.” How fitting, then, to use the manger as an altar for Mass.

On the first day of this month, Pope Francis published a letter from Greccio, the town where his namesake placed that first manger scene.

The letter, which is available online, is titled “Admirabile Signum,” and it is a meditation “On the Meaning and Importance of the Nativity scene.”

This “depiction of Jesus’ birth,” the Holy Father tells us, “is itself a simple and joyful proclamation of the mystery of the incarnation of the Son of God. The Nativity scene is like a living Gospel rising up from the pages of sacred Scripture.”

Francis sees the initiative of St. Francis as something more than a work of creative genius. It is “a great work of evangelization.”

It invites onlookers “to ‘feel’ and ‘touch’ the poverty that God’s Son took upon himself in the incarnation.”

The crèche “shows God’s tender love: the Creator of the universe lowered himself to take up our littleness.”

The crèche, however, does not allow us to remain spectators. It is a summons “to follow [God] along the path of humility, poverty, and self-denial that leads from the manger of Bethlehem to the cross. It asks us to meet him and serve him by showing mercy to those of our brothers and sisters in greatest need.”

In his letter, the pope proceeds to consider the particular virtues of each character in the scene: the newborn Jesus, the Virgin Mary, St. Joseph, the Magi, the shepherds (and sheep), and angels.

But he also considers the “fanciful additions” people make by placing “other figures that have no apparent connection with the Gospel accounts.” Artistic renderings sometimes include a beggar, blacksmith, baker, or musicians, or all of the above. Children might add a favorite doll or stuffed toy to the scene.

The pope observes that “these fanciful additions show that in the new world inaugurated by Jesus there is room for whatever is truly human and for all God’s creatures: … [A]ll this speaks of the everyday holiness, the joy of doing ordinary things in an extraordinary way, born whenever Jesus shares his divine life with us.”

He closes his letter with recollections, from his own childhood, of setting up the crèche at home. He invites readers to call up their own memories. “Wherever it is, and whatever form it takes, the Christmas crèche speaks to us of the love of God, the God who became a child in order to make us know how close he is to every man, woman, and child.”

The crèche of 1223 in Greccio has been imitated countless times through the centuries, with figures alive or fashioned from wood, plaster, or plastic.

St. Francis, we must conclude, succeeded where the earlier extravagant productions had failed. In the words of the pope who took his name, “His teaching touched the hearts of Christians and continues today to offer a simple yet authentic means of portraying the beauty of our faith.”

Saint of the day: Dominic Guzman