Men in crisis: Can the Church help reverse a troubling trend?

After 20 years in the classroom, Ron Jelinek, professor of marketing at Providence College’s School of Business, is concerned about a pattern that he said, “statistically speaking, you wouldn’t expect to see.”

In his interactions with students, Jelinek sees typical college males “paralyzed by insecurity and guilt,” which leads them to “bail out on becoming their best selves.”

A father of three girls, Jelinek is happy that his female students are performing well. But he is not alone in his concern over the growing evidence that American males, from young adults to the elderly, are not only underperforming, but “opting out”: of education and work, relationships and responsibility, and even life itself through overdoses and suicide.

While Jelinek watches the crisis play out in the classroom, Father Jack Dickinson sees it in the pews. As pastor of St. John Paul II Church in Scarborough, Maine, what he’s witnessing in his ministry — which includes spending hours in the confessional, preparing couples for marriage, visiting parishioners’ homes, giving spiritual direction — has him similarly concerned about trends affecting the men in his pastoral care.

According to Dickinson, men rarely have that milestone moment anymore when they realize “my life is not my own.”

“They almost have too many options available to them,” he observed. “They think that committing to one thing will tie them down, which they see as a bad thing.”

Dickinson believes that men are having trouble seeing where they fit in — in the workplace, in their families, and in society as a whole. He also serves as the judicial vicar for the Diocese of Portland, where his work in the marriage tribunal has given him a birds-eye view of how these trends have snowballed over the last few decades.

“Substance abuse, addictions, pornography … these are not new phenomena for marital breakdown,” he said. “A lack of community and fraternity is absolutely linked to marital difficulties. Fraternal organizations — Catholic and secular — are missing.” 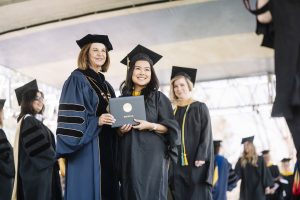 Regis University interim President Cody Teets (left) with a graduate in Denver earlier this year. Scholars like Kay Hymowitz believe that the advance of women in school and work in recent generations has came at a price for American men. (CNS/Brett Stakelin, Courtesy Regis University)

Virginia-based marriage and family therapist Art Bennett said that after more than 30 years of clinical experience, one word comes to mind to describe an increasing number of his male patients: afraid.

While he muses that “radical distractions” like social media, interruptions on computers and phones, and the push to multitask are all inhibiting a collective ability to meet challenges with competence and confidence, he also believes that “the cultural emphasis on self-esteem over self-efficacy” is a big part of the problem.

“Where men used to see challenges and opportunities, they now see paths to failure,” he said.

“They think anxiety is the ‘new normal.’ They’re now more afraid of the present and the future.”

The roots of an exodus

Research confirms the suspicions that people like Jelinek, Father Dickinson, and Bennett describe, suggesting that a seismic cultural shift is underway, one that has sped up considerably over the past decade.

Among the suspected culprits, a few loom large: the shift from manual labor to a knowledge economy; isolation; fatherlessness; and a cultural aversion to masculinity.

While these trends hit men from different generational, racial, ethnic, and socioeconomic groups to varying degrees, no group is unaffected. The statistics tell a story of fathers, grandfathers, sons, and husbands in need of a field hospital.

The Manhattan Institute’s Kay Hymowitz was one of the first to sound the alarm with her book “Manning Up: How the Rise of Women Has Turned Men into Boys” (Basic Books, $15.99) exploring the emergence of “extended adolescence.” Her attention turned to a generation delaying marriage and childrearing, milestones that previously marked the transition to adulthood.

While men were initially happy with their “no-strings-attached” 20s and 30s, they quickly began trailing their female peers in school and at work. Hymowitz observed that the social hierarchy “flipped” almost overnight: suddenly, women had higher GPA’s, more college degrees, and were on track to earn more than their male counterparts in a variety of fields.

In an economy where women have advanced so quickly, Hymowitz wrote, “husbands and fathers are now optional, and the qualities of character men once needed to play their role — fortitude, stoicism, courage, fidelity — are obsolete, even a little embarrassing.”

He found that 7 million “prime-working age” men — that is, between 24-54 — were neither working nor looking for work. Men who were “less-educated, never-married, and without children at home” were among those represented in greater numbers.

In the wake of COVID-19, Eberstadt found that the figure jumped to 1 in 8 men.

Speaking to The Wall Street Journal, Eberstadt said, “By and large, nonworking men don’t ‘do’ civil society. Their time spent helping in the home, their time spent in worship — a whole range of activities, they just aren’t doing.”

Instead, he found, they report spending 2,000 hours a year in front of screens, “like that’s their job.”

The decision to opt out

Among the growing number of contemporary voices raising the alarm is cultural critic and British philosopher Nina Power, author of the new book “What Do Men Want? Masculinity and Its Discontents” (Allen Lane, $21.38).

Power wonders whether or not women’s economic and cultural gains must come at men’s expense. She worries that activism aimed at dismantling “the patriarchy” — structures said to contribute to women’s diminishment — fail to take into account the value that fathers have played in protecting, defending, and securing the well-being of their loved ones and communities.

“Bashing men is … easy,” she writes in the book. “It is much more difficult, but ultimately worthwhile … to wonder how we might live together better.”

Jelinek likewise attributes some of the problems he sees with the fact that his students have been taught to scrutinize men over the course of their educational careers, considering them wholesale through the lenses of “privilege” and “guilt.”

“But unlike their male counterparts,” he said, “women have not been told they are responsible for the category’s failings. If men as a category are guilty of ‘X, Y, and Z,’ why should any young man believe that he as an individual will ever be viewed as anything better?”

“In a strange way,” he reflected, “men see cultural vilification as justification for making their exit.” 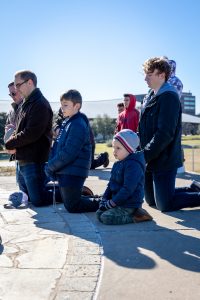 A family prays the rosary at Butler Metro Park in Austin, Texas, on Feb. 5. (Ashley Campos/Diocese of Austin)

Power references the phenomenon of what American poet Robert Bly calls the “soft male”: men (observed among his speaking audiences) who are “not interested in harming the earth, or starting wars, or working for corporations” but seem devoid of happiness and energy.

Research suggests that idleness and listlessness also afflicts men who are past their prime. While Eberdstadt found that many retirees spend a majority of their days watching television, Harvard professor Arthur Brooks wrote in early 2020 that loneliness, childlessness, and the feeling of being “economically superfluous” are likely driving up rates of suicide among middle-aged and elderly men.

Men also experience homelessness, drug addiction, and homicide more than women. Seventy percent of all homeless persons are male, and 7 out of 10 Americans succumbing to preventable opioid overdoses are male. The death rate of Black men from overdoses has more than tripled since 2015. And in 2020, the homicide rate in the U.S. increased by 35%, and 62% of all victims were Black males.

A place to rebuild masculinity?

For the Catholic Church, which is routinely written off as a patriarchal institution, stepping in to help “save men” and work to reverse these trends might seem like an unpopular endeavor.

But the 2,000-year-old institution has several advantages in the fight: a well-developed understanding of sexual complementarity, personal vocation and redemption, concern for the down and out, and built-in networks of community that men so desperately need in today’s atomized culture.

A good place to start, believes Father Dickinson, is the principle of paternity.

“We probably don’t preach on fatherhood enough,” Dickinson said of priests. “We preach about God the Father, but recognizing that you’re called to lay down your life as a father, either with a family or as a priest, to become a man of wholeness so that you can be a man of holiness … that’s what men need to hear.”

Indeed, consensus shows that men need involved fathers, other male friends, and a positive understanding of their masculinity to flourish.

Writing in The Atlantic in 2013, University of Virginia sociologist Brad Wilcox detailed four distinctive things dads do for their children that lower delinquency and depression later in life: physical play; encouraging risk; protection; and firm discipline.

In other studies, Wilcox has demonstrated how both Black and white children do better when they are raised by their two biological parents in a stable marriage. Paternal involvement in children’s high school years is also closely linked with college graduation rates.

Bennett agrees with Wilcox’s findings. He thinks the increase in men who relay feeling defeated by obstacles might be aggravated by absentee fathers or fathers who are poor mentors.

“Dads who are present but are withdrawn or nonparticipatory have a big impact,” he said. “It creates a series of wounds and isolation, a lack of confidence in how to deal with life’s challenges.”

In addition to needing fathers who are physically and emotionally present, men who have strong peer networks do better than men who are isolated. They are less likely to suffer from loneliness, forms of mental illness, and Alzheimer’s disease, among other ills.

Yet according to a 2021 study, 1 in 5 American men said that they do not have a close friend, and only 30% of men reported having a private, emotional conversation with a close friend when the survey was conducted.

Dickinson noted how important it is for men to have older men to imitate and male peers with whom they can grow and be challenged. 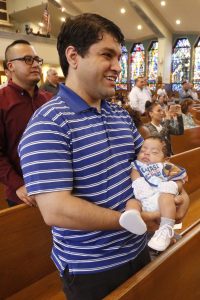 Daniel Kelly holds his son Patrick, as he and fellow fathers receive a special Father's Day blessing at St. Athanasius Church in Brooklyn in 2019. (CNS photo/Gregory A. Shemitz)

At his former parish assignment, he witnessed how a lay-led program called “That Man is You” transformed the lives of his parishioners, who would gather at 7 a.m. on Saturday mornings.

“I saw men of all ages and backgrounds, from different lines of work, experiencing profound healing and conversion. For many, it was the first time seeing who they are and how God sees them.”

Dickinson said a key to its success was that priests were auxiliary to the group; having laymen lead it really made a difference.

Finally, many believe that “reclaiming” masculinity is essential to any project that wants to take on the ills plaguing men.

While noting how important the #MeToo movement was in assisting victims of abuse and dismantling sexist practices in a variety of settings, Power underscored that describing masculinity as “toxic” is to say that men are poisonous to society.

“Men today are subject to a series of contradictory instructions. They are told to take charge, to be responsible, to show initiative, but at the same time warned that their version of masculinity might be exhibiting privilege.”

“To encourage independence without support,” Power wrote, “is to create anxious beings for whom any missteps … are minefields.”

As a matter of faith, Father Dickinson believes helping men understand their masculinity as a gift is vital for the Church and society. Equally important is inspiring men to discover their individual mission and the particular way God is calling them to fatherhood.

“An authentic man is a man of his word, is willing to sacrifice, and won’t shy away from speaking truth in charity,” he said. “We need more of them.”