Judas and the Good Shepherd

Forgiveness, forgiveness. It is so difficult to forgive. There is just one condition, however, without which no one can ever forgive. You will be able to forgive if you have had the grace of feeling forgiven. Only the person who feels forgiven is capable of forgiving. I forgive because, first, I have been forgiven.

Think instead of the doctors of the law, the Pharisees, those who made war on Jesus. They believed they were the righteous. They did not need forgiveness and did not understand why Jesus forgave sinners, ate with them, healed them, and associated with the leprous. Jesus forgave everyone, and the Pharisees did not understand, because they felt so righteous that they could not savor that wonderful experience.

I too will recount, as a Christian, as a person, what I have experienced. Once, when I felt that the Lord had forgiven me of so many things, I wept with joy. Still today, when I think back on how I wept and it is my turn to forgive, I say to myself, “There’s no comparison; this is a small thing compared with the time God showed you great mercy.”

In the account of Jesus’s Passion, three episodes speak to us of shame. Three persons who become ashamed.

The first is Peter. Peter hears the cock crow, and in that moment, he feels something inside himself and sees Jesus come out and look at him. The shame is such that he weeps bitterly (cf. Luke 22:54—62).

The second case is that of the good thief. “We are here,” he says to his companion in misfortune, “because we have done wicked and unjust things, but this poor innocent man has done nothing wrong.” He feels guilty, he is ashamed, and Saint Augustine says that in this way he gained paradise (cf. Lk 23:39—43).

The third, the one that moves me the most, is the shame of Judas. Judas is a figure who is difficult to understand, though there have been many interpretations of his personality. In the end, however, when he sees what he has done, he goes to the “righteous,” to the priests, and says, “I have sinned, because I have betrayed innocent blood.” They reply to him, “What does that have to do with us? See to it yourself” (cf. Matthew 27:3—10). So he goes off with the guilt that suffocates him.

Perhaps if he had found Our Lady, things would have changed, but the poor guy goes away, finds no way out, and hangs himself.

However, there is one thing that makes me think that the story of Judas does not end there. Maybe someone will think, “This pope is a heretic.” Not at all!

Go look at a specific medieval capital or column in the Basilica of Saint Mary Magdalene in Vézelay, in Burgundy. The men of the Middle Ages did catechesis through architecture, sculptures, images. On one side of the capital is Judas after he hanged himself, but on the other is the Good Shepherd lifting him onto his shoulders and taking him with him. On the lips of the Good Shepherd is the hint of a smile that I would not call ironic, but somewhat shrewdly knowing.

Behind my desk, I keep a photograph of this capital divided into two sections, because it helps me meditate.

There are many ways to be ashamed; despair is one of them, but we must try to help the desperate so that they may find the true path of shame, and not travel the one that ends with Judas.

These three figures of Jesus’s Passion help me so much. Shame is a grace. Where I am from in Argentina, a person who does not know how to behave and does wrong is called “shameless.”

One cannot live without forgiveness — or at least, one cannot live well, especially in the family. Every day we do wrong to one another. We have to take stock of these mistakes, due to our frailty and our selfishness. But what is asked of us is to heal right away the wounds that we cause, to repair immediately the threads that we break in the family. If we wait too long it becomes too difficult.

And there is a simple secret for healing wounds and dispelling accusations. It is this: Do not let the day end without apologizing, without making peace between husband and wife, between parents and children, between brothers and sisters, between daughter-in-law and mother-in-law! If we learn to apologize right away and to forgive one another, then wounds heal, marriage becomes stronger, and the family becomes an ever more solid house, one that withstands the impacts of our wrongdoings large and small.

If we learn to live like this in the family, we will do the same outside of it, wherever we find ourselves. It is easy to be skeptical about this. Many — even among Christians — think that this is an exaggeration. “Yes,” they say, “those are beautiful words, but it is impossible to put them into practice.”

But thanks to God, that is not the case. In fact, it is precisely in receiving forgiveness from God that we in turn are capable of forgiving others.

This is why Jesus has us repeat these words every time we recite the prayer of the Our Father, every day. And it is indispensable that, in a society that is merciless at times, there should be places, like the family, where we can learn to forgive one another. 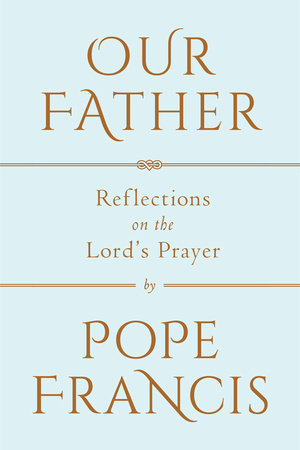 Pope Francis is the 266th Pope of the Catholic Church. This is excerpted from his new book, “Our Father: Reflections on the Lord’s Prayer,” published March 13 by Image Books. Used with permission. Copyright © 2017 by Libreria Editrice Vaticana, Citta del Vaticano. Copyright © 2017 by Rizzoli Libri, S.p.A./Rizzoli, Milano. Translation copyright © 2018 by Penguin Random House LLC. Published by Image, an imprint of Penguin Random House LLC. Originally published in Italian by Rizzoli Libri S.p.A. in 2017.

Pope Francis is the 266th Pope of the Catholic Church.