Is ‘the other Guadalupe’ Spain’s best-kept Catholic secret?

A “Guadalupano,” as Catholics of Mexican heritage will tell you, is a person with special devotion to the Virgin Mary, who miraculously appeared to St. Juan Diego in 1531 in present-day Mexico City.

But have you ever heard of a Guadalupense?

The distinction is not well known. But as Mexico prepares to celebrate the 500th anniversary of its patroness’ apparition in 10 years, another, less famous Virgin of Guadalupe thousands of miles away is enjoying a revival of her own.

The small town of Guadalupe (population 2,000), nestled in the mountains of Spain’s western Extremadura region, has been a pilgrimage destination for centuries. Last year, the shrine kicked off a “Guadalupense” jubilee year (celebrated whenever her Sept. 6 feast day falls on a Sunday). The Vatican has since extended the jubilee an extra year into 2022 due to the COVID-19 pandemic.

Despite the remarkable similarities of their origin stories, Spain and Mexico’s respective Guadalupes are rarely mentioned together. St. Pope John Paul II brought the Spanish Guadalupe into the spotlight in 1982 when he became the first pope to visit the monastery where her image is kept. There, he made a surprising confession.

“The great esteem I have for the Virgin of Guadalupe of Mexico is unquestionable,” the pope said. “But I realize that her origins are here. I should have come here before going to the Tepeyac Basilica to better understand Mexican devotion.” 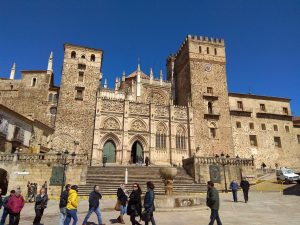 The monastery of Santa María de Guadalupe in Spain was declared a UNESCO World Heritage site in 1993. (EFE/Paloma Puente)

The exact year is unknown, but the story goes that sometime in the late 1200s, a rancher was searching for a lost cow along a river named Guadalupe (“hidden river” in Arabic) in the mountains east of Cáceres. He found the animal dead, but as he was making a cross-shaped incision to skin its hide, two things happened: the cow came back to life; and a woman identifying herself as the mother of Jesus appeared to him.

“Do not be afraid,” she told the man, remembered as Gil Cordero. “I am the mother of God, savior of the human race.”

The woman told him to return the cow to the herd, and to “tell the clerics what you have seen.” Further, she instructed that the clerics should dig on the spot where the cow was found. There, the virgin said, they would find an image of her that was to remain in that place.

“There will come a time in this place that a great church, house, and large town will be built,” she told him.

When Cordero arrived home that day, he found his wife mourning the sudden death of their son. In desperation, he started to pray to the mysterious woman he had met earlier. His son came back to life.

That miracle was enough to make his story believable to local religious authorities, beginning with a group of priests who arrived at his home. Having been summoned to bury the boy, they found him alive, and believed.

Cordero proceeded to take them to the site where he had found his cow. There they unearthed a 2-foot-tall sculpture of a woman made from cedar wood in a Romanesque style. From that point, devotion to the virgin quickly caught on.

It was the height of the “reconquista,” the long Christian military campaign to end the Islamic occupation of much of the Iberian Peninsula. Before long, news of the apparition reached the pope in Avignon, France, and even the Spanish royals began invoking the virgin.

When Spanish soldiers and missionaries started arriving in the New World in the late 15th century, they brought their devotion to the mysterious Virgin of Guadalupe with them.

According to one well-known account, Christopher Columbus was sailing back to Europe in 1493 after first discovering America when his two remaining ships were separated by a dangerous storm in the Atlantic. Columbus urged his men to ask the Virgin Mary for deliverance, and after being spared, the explorer ordered the crew to make an act of thanksgiving at the Guadalupe shrine upon returning to Spain.

Less than 50 years later, in December 1531, when a woman who seemed to glow like the rays of the sun appeared to Juan Diego in the hills outside Mexico City, the similarities with the experience of Cordero’s were striking.

Diego, like Cordero, was a man of humble social standing. And the virgin gave him instructions similar to what she told Cordero — report her apparition to Church officials and request that a church be built to hold her image and glorify God.

Skeptics like to speculate that the Mexican Guadalupe account is a myth inspired by the Spanish Guadalupe, a ploy used to inspire conversions and Marian devotion among natives.

But Msgr. Eduardo Chavez, rector and co-founder of the Institute for Guadalupano Studies in Mexico City, said there is abundant historical evidence that the parallels between the Mexican and Spanish Guadalupes are not of human origin.

He notes that the two Guadalupe stories are not the only cases of Mary asking her apparitions to be reported to Church authorities — similar instructions were given in the Lourdes and Fátima apparitions, among others.

“It’s not that the Mexican story was invented to correspond with the Spanish one,” explained Msgr. Chavez in a phone interview. “The Virgin Mary, when it is really her, is ecclesial. She is Church. And that is shown when she sends Juan Diego to go to the bishop.”

Also, the two images are entirely different, Msgr. Chavez noted. Even in their very form, the Spanish one shows Mary holding the child Jesus, while the Mexican tilma depicts a pregnant virgin.

By revealing herself as “Santa Maria de Guadalupe” to Juan Bernardino, Juan Diego’s uncle, Mary “wanted a name known to the Spaniards,” Msgr. Chavez added. “If not, the Spaniards would have burned her image right away.” 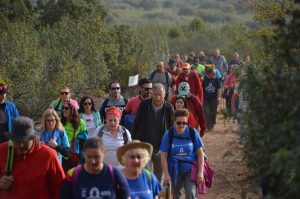 Pilgrims make their way to the town Guadalupe, Spain, on one of the 23 official pilgrimage routes. (Asociación Fray Hernando de Talavera)

Like the Mexican Guadalupe, the Spanish one’s origin story ultimately points to Christ — not the virgin herself — as the source of salvation.

“At the end of the day, this isn’t some superstitious Marian devotion that’s about ensuring that nothing bad happens to me, or of making votive offerings,” said Spanish art historian Pilar Gordillo, who has studied the Spanish virgin’s artistic and historical origins.

Like the better-known Camino de Santiago in the north of Spain, Guadalupe is associated with walking pilgrimages. There are 23 official pilgrimage routes throughout Spain leading to the Guadalupe monastery, a UNESCO World Heritage site since 1993.

Father Raul Muelas, pro-vicar general of the Archdiocese of Toledo in Spain (where Guadalupe is located) and lead organizer of the jubilee year, told Angelus that the pandemic has made this jubilee “more humble” than past ones. But as COVID-19 restrictions loosen, “the comeback is happening.”

Groups of pilgrims have been arriving to the town in greater numbers, and the monastery recently hosted a conference of artists from all over Spain. Priests in towns along the pilgrimage routes have reported more requests for hospitality. Pilgrimage stories have even drawn attention from the press, like that of a Spanish teen with a rare intellectual disability whose father documented his pilgrimage to Guadalupe on social media.

Art historian Pilar Gordillo serves as "Delegate for Faith and Culture" for the Archdiocese of Toledo in Spain. (Courtesy photo)

Healing is also a major theme of this year’s jubilee, said Gordillo, who is a mother of 10 and also oversees the Toledo Archdiocese’s cultural outreach efforts.

Guadalupe, she explained, was historically known for hospitals set up by Hieronymite monks in the town to treat pilgrims and people from surrounding rural areas.

“Patients would go to be healed, but they would also receive the care of the virgin, through the angels that were these monks,” she said. At the end of their stay, patients were given a pair of shoes from the monks, a gesture that was both practical and symbolic.

“Through the human encounter, the healing of the soul gives you shoes, gives you feet, gives you wings, to walk and return to the world, and be able to take on whatever comes your way,” Gordillo explained.

Whether the pilgrimage is done on foot or by driving, the important thing is that “one also travels in spiritual stages,” said Father Muelas.

“In that penance of walking in a spirit of poverty, and sometimes in precariousness, one goes leaving behind a lot of superfluous things in order to remain with what is important.”

Father Muelas also serves as pastor in Talavera de la Reina, a town that is one of the more popular Guadalupe pilgrimage stops. He has seen firsthand how the opportunity to welcome — and be welcomed — benefits all involved.

“All these beautiful things that surprise us on the way help prepare our hearts for the encounter with God through St. Mary.”