In 1993, 39-year-old nuclear engineer Hal Elkins hit the bottle and fell into a jealous rage. He pocketed a gun and stumbled into a Salem restaurant. There, he shot his girlfriend, Kathryn Linn, and the man she was with, Marvin Eugene Mayer.

Linn died and Mayer was seriously hurt. A jury convicted Elkins and the judge imposed a 33-year sentence in Oregon State Penitentiary.

Within a decade, other inmates would be calling Elkins "the Bishop of OSP." A bear of a man at 6-foot-2, he became a legendary lay Catholic leader, sacristan, altar server and chaplain's clerk. He would tell anyone he met that prison got his faith life moving from 0 to 100.

"His attitude in prison seemed to be that he was serving God, not time," said Deacon Allen Vandecoevering, a longtime Oregon prison minister.

Elkins' sentence came to an end in 2018. On the outside he continued as a stellar Catholic, going to Mass as often as work would allow and attending faith formation sessions. Then, on June 26, 2019 -- nine months after his release -- he died of liver cancer at age 66. 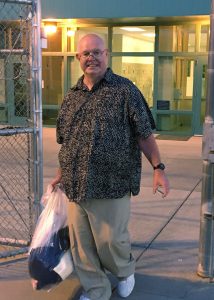 Hal Elkins smiles as he walks out of the Oregon State Penitentiary in 2018. He died of cancer nine months after being released. (CNS photo/courtesy Jeri Down-Jones)

"He was enjoying life to the fullest and when he discovered that he had a terminal illness his faith was not shaken," said Deacon Vandecoevering, who took Elkins Communion as he lay dying. "He wanted to live so badly, but he surrendered to God's will with beauty and grace." The Eucharist was all Elkins wanted at the end.

"His life was an amazing example of what God will do for us when we turn from our sins and find forgiveness," Deacon Vandecoevering told the Catholic Sentinel, newspaper of the Archdiocese of Portland.

A graduate of North Salem High school, Elkins joined the Navy during the Vietnam War and gained expertise in nuclear power. He wed young, and that marriage eventually ended, leaving him devastated. It was in that emotional maelstrom that he committed murder.

"He regretted his crime," said Laura Kazlas, head Catholic volunteer at Oregon State Penitentiary. "He did feel Christ's forgiveness eventually. It was a long road for him to get there."

In prison, Elkins carried what he called "the burden of a serious felony on one's conscience." Amid that, he experienced a deep conversion and became a gentle Catholic leader, marshaling other convicts in the faith.

"He said being in prison had brought him closer and closer to Jesus," said Kazlas. "He led almost a monastic life in his cell."

Prison staff and volunteers noticed the change and entrusted Elkins with more and more. He tended to the prison altar, but also to the men. He'd tell Kazlas if an inmate was having trouble or needed a Bible or a rosary. Elkins made sure there were Spanish hymns at Mass since some Catholic inmates are native Spanish speakers.

"He took care of the men almost like a deacon or priest would," Kazlas said. "He was very unselfish in the way he looked out for their well being."

If a new inmate or visitor came onto the cell block, it was Elkins who introduced himself and extended a warm welcome. He treated people like he was their loving big brother, Kazlas explained.

Elkins was generous, tithing at St. Joseph Parish in Salem even while behind bars and giving a donation to set up a prison ministry at the parish. He paid for a large crucifix in the prison chapel, but let other inmates help choose it.

He was a regular in the prison leather shop. Among his works was a briefcase for  Catholic prison volunteer Dennis Lulay and a sign showing Jesus behind bars, a piece now hanging in the Archdiocese of Portland prison ministry office. Elkins also made leather key fobs for seminarians who did field education at the prison. Showing Elkins' sense of humor, the fobs read: "Stolen from Oregon State Penitentiary." 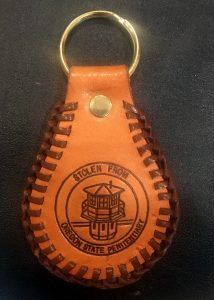 This is one of the key fobs Hal Elkins made for seminarians who did field education at Oregon State Penitentiary. (CNS photo/courtesy Laura Kazlas)

John Hoffmeister, another Catholic volunteer, said Elkins' story proves the point that most inmates are people with good hearts who made grave mistakes. God loves them and calls on them no less, said Hoffmeister.

"He showed the men what being a Christian is about," Hoffmeister said.

"It's a wonderful story of redemption," said Portland Archbishop Alexander K. Sample, who met with Elkins during prison visits and later after the sentence was served. "A person can go down the wrong path in life and then have a profound change of heart and a conversion and become a very holy person."

The archbishop, like most prison ministers, never asked what crimes Elkins had committed.

"God is merciful and loving and understanding with us and offers that opportunity for repentance and conversion," the archbishop said. "I saw that in Hal."

Once out of prison, Elkins landed work right away with an Albany, Oregon, company that produces gel for fighting fires.

"He held no bitterness in his heart, which allowed him to have such peace and joy when he was freed," Deacon Vandecoevering said.

The peace remained even with a fatal diagnosis. A week before he died, Elkins told Kazlas, "I am ready to meet Jesus."

After he left prison, Elkins moved in with his sister Jeri Down-Jones of Salem. The two had spoken each week since Elkins was arrested.

"Faith is the thing that carried him through," said Down-Jones, who herself became Catholic in 2009. "Any time I had a question about faith, I asked him. He was my source and my rock."

Down-Jones, a member of St. Joseph Parish in Salem, said that a "stupid five minutes" defined Elkins for the rest of his life. But her brother later worked hard to be a good man.

"When he was dying, he told me something," said Down-Jones, weeping at the memory. "He said when he gets to heaven, he is going to prepare the altar every Sunday for God."