How Christmas teaches the truths of the creed

“The calendar is a catechism.” That is a commonplace saying of modern Judaism, and you’ll find it in the works of many rabbis.

The premise is simple. Before there were any biblical texts, there were sacred feasts. The Torah records the observance of pre-existing feast days, such as Passover, Pentecost, and Tabernacles (see Exodus 5:1, 12:14).

Each feast served to strengthen common identity, memorialize a real event, and teach important truths about God. Rabbi Harold Kushner explained: “Jews absorbed the central ideas of their faith not by studying them systematically but by celebrating the weekly Sabbath and the annual cycle of festivals, and gradually absorbing the lessons they conveyed.”

Catholics today do have a catechism. In fact, we have many. But the principle still applies, and it’s possible that most believers learn more religion by celebrating the feasts than they do by reading religious books.

For Catholics as for Jews, the calendar is a catechism. And for Catholics no feast delivers core doctrines as effectively as Christmas. 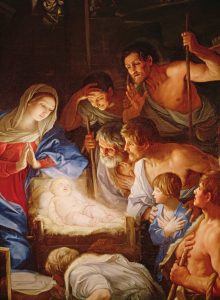 Doctrine is embedded in the symbols of the season. It’s encoded in the carols. It’s plated with the foods. The holiday is an aggregate of customs, all designed to make religious truth sweet and memorable.

The very name of the holiday is derived from “The Christ’s Mass.” And Catholic dogma lives loudly in all its hours. With preparation through Advent — and review until Epiphany — these winter weeks deliver a full immersion in the truths of the creed. Such as …

The incarnation of the Lord. With Jesus’ conception in his mother’s virginal womb, God assumed human flesh and began to live a human life: “the Word became flesh and made his dwelling among us” (John 1:14). The finite contained the infinite. The eternal entered time.

God did this in order to save his people, because we could not save ourselves. The Incarnation is the fullness of God’s self-revelation. What had been foreshadowed in the Old Testament was now brought into the light.

Jesus’ true humanity. In Jesus Christ, God did not merely assume the appearance of humanity. He was born a baby. He was swaddled (Luke 2:7). He slept. He was circumcised (Luke 2:21). He was carried in arms (Matthew 2:14). He came to share the lot of his people and to refound the human race.

At the end of his earthly ministry he would — for our salvation — suffer torture, asphyxiation, and death. But the condition for this is his true humanity, which is evident throughout the story of Christmas.

Jesus’ true divinity. In the Christmas story Jesus is described with titles ordinarily reserved for God. He is called “Lord” (Luke 1:43) and “God with us” (Matthew 1:23). Even as a baby he receives worship (Matthew 2:11), indicating his deity.

In another seasonal reading we see that he is the Son of God, “born of a woman” (Galatians 4:4); and so he shares his Father’s divine nature as well as his mother’s human nature. “For in him dwells the whole fullness of the deity bodily” (Colossians 1:15). 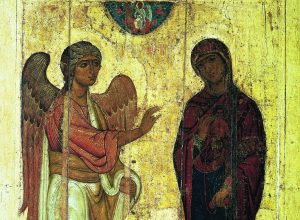 The virginal conception of Jesus. This is a key element in the Christmas story, revealed in different but complementary ways in the Gospels of St. Matthew and St. Luke. Mary’s virginity is introduced as proof of Jesus’ divinity (God is truly his Father) and his humanity (she is truly his mother).

In the early centuries of Christianity, Mary’s virginity was the Christian doctrine most attacked and mocked by outsiders. Jews derided it in the Talmud. The pagan Celsus scorned it in his denunciation of Christianity. Within the Church, few doctrines were so passionately defended. The earliest defenses were composed in the mid-first century, and many more followed.

The Trinitarian nature of God. By the will of the Father and the power of the Holy Spirit, Mary conceived God the Son (Luke 1:32, 1:36). In the Old Testament we find hints that God is one, but a communion of Persons.

In Genesis he speaks in the first-person plural: “Let us …” (1:26). Later books in the canon speak of “the Spirit of God” and “the Wisdom of God” as if they were distinct persons. Only with the Incarnation was the truth about God made manifest. And that revelation began with the Christmas story.

The celebration of Christmas began at a time when heretics were denying these core doctrines of Christianity. In the fourth century, a Libyan named Arius gained a following by rejecting the coeternity and coequality of God the Son and God the Father.

Meanwhile, other heretics — who followed a man named Marcion — asserted that Jesus possessed no divinity until the time of his baptism, as an adult, in the River Jordan. Still others — called Docetists or Gnostics — believed that Jesus’ human body was illusory and unreal.

The most effective way for the Church to counteract these heresies was to tell the Christmas story, and celebrate it as a historical fact. 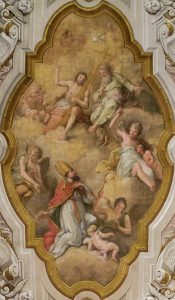 "The Glory of Saint Nicholas," by António Manuel da Fonseca, in the ceiling of the Church of St. Nicholas in Lisbon, Portugal. Nicholas of Myra, a participant in the First Council of Nicaea, achieving the beatific vision in the shape of the Holy Trinity. (Wikimedia Commons)

So the feast emerged, in 336 in the West and a little bit later in the East.

And for the millennium and a half that followed, Christmas remained an important means of teaching Christianity. Why? Because there were no readily available, published catechisms in the Church.

Some of the early Fathers (Lactantius and St. Gregory of Nyssa) had written summary handbooks of the Faith. But that was long before the invention of the printing press. So books, copied out by hand, were expensive rarities. And few people could read anyway.

Yet, for all those years, the Church raised up devout generations, millions of people who had a lively faith in Jesus Christ and a deep familiarity with his saving doctrine.

One of the great Church historians of the last century, Father Josef Jungmann, gave credit to the feasts. The liturgy, he said, “dominated the seasons of the year through the celebration of the ecclesiastical feasts and impressed the chief mysteries of faith upon the popular consciousness.”

So, by celebrating Christmas, believers grew in their understanding of the incarnation of the Lord … the humanity and divinity of Jesus … the life of the eternal Trinity.

The exercise is just as useful in an age of widespread literacy. Today we Catholics do have a catechism, and yet it also points us to the feasts: “The memorial is not merely the recollection of past events. . . . In the liturgical celebration of these events, they become in a certain way present and real.”

That is how feasts work in biblical religion. They teach, but they don’t merely instruct. God does not summon his people to attend a history class. A feast teaches by sharing life. The people of today come to participate in a long-ago, saving event.

And so this season Catholics will celebrate — some in churches and some at home — and they’ll sing their creed with gusto, to melodies they’ve known since childhood.

“Veiled in flesh the Godhead see!

Their children and their grandchildren will hear and join in, and the calendar will teach another generation, as it has taught all others.