Forty-two generations to bring us closer to Christ this Advent

The following is an excerpt from Edward Sri, Ph.D.’s new book, “God With Us: Encountering Jesus in the Gospel of Matthew”  ($22.95, Emmaus Road Publishing) as a reflection for the liturgical season of Advent.

For most people, reading a biblical genealogy is about as exciting as reading the fine print in an instruction manual. Yet this is exactly how the entire New Testament begins in chapter one of Matthew’s Gospel:

I would bet that many readers today do what I did when I first looked at this genealogy: skip the long list of names and pick up again in chapter two! Even the few brave readers who survive the list of 42 generations are nevertheless probably left wondering, “Couldn’t Matthew have chosen a better way to begin his Gospel?”

Admittedly, being hit with a family tree of people who lived thousands of years ago doesn’t seem to be the most captivating way to lure people into the story of Jesus Christ. As one New Testament scholar put it, “Let’s face it: Other people’s family trees are about as interesting as other people’s holiday videos.”

For a Jew in Jesus’ day, however, this genealogy would have had more attention-grabbing power than the most popular video or news item trending on social media today. It would have summed up all their hopes and expectations about what God had been promising to do in their lives ever since the time of Abraham.

And it would have triumphantly announced that God’s plan had come to completion in their own lifetime! In fact, if there were modern media outlets in first-century Judaism, this little genealogy would have made the top story on CNN.

Let’s look at Matthew’s genealogy with new eyes — with the eyes of first-century Jews who would have seen their identity, history, and future encapsulated in these few verses. In the process, we will begin to see how this story of Jesus, which sums up the story of Israel, has become our story — the story of the Church.

The promised “Son of David”

For the ancient Jews, a genealogy is not just a long list of names. Every name tells a story. And the name that stands out most in Jesus’ genealogy is David, the great king of Israel in the Old Testament.

Consider the many ways Matthew draws attention to David and his relationship with Jesus. The very first title Matthew bestows on Jesus in the opening verse is the “son of David” (1:1).

Another link between David and Jesus is that they are the only individuals who are given titles.  David is described as “the king” (1:6) and Jesus is called the “Christ” — meaning “anointed one” (1:16), a title given to a Davidic king when he was anointed at his coronation.

Scholars have also found Davidic imagery in verse 17, in which Matthew draws attention to the number of generations in the genealogy from Abraham to Jesus:

Here, Matthew divides all 42 generations of the genealogy into three sets of 14. He is drawing our attention to the number 14, which is significant because David’s name “adds up” to 14 in Hebrew.

Let me explain. In the Hebrew alphabet, letters are also given numeric value. The three Hebrew consonants in David’s name are dwd (d = 4, w = 6), adding up to 14. Thus, the very structure of Matthew’s genealogy centered around three sets of 14 generations subtly proclaims Jesus to be the “thrice-Davidic Son of David.” 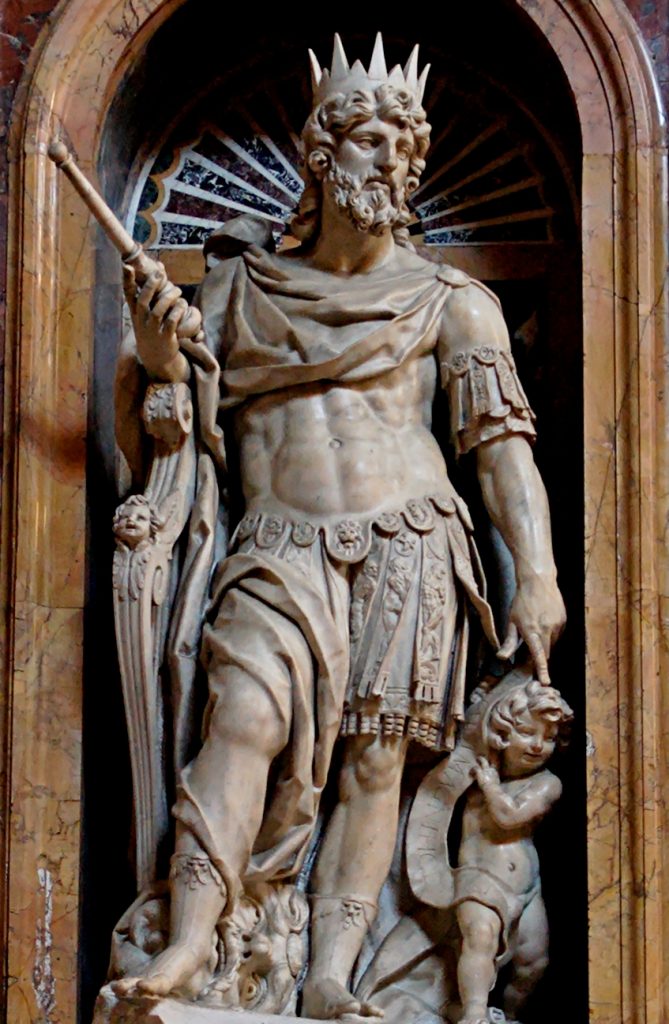 Statue of King David, conqueror of Goliath, pointing toward his descendant, the Messiah, by French sculptor Nicholas Cordier in the Borghese Chapel of the Basilica di Santa Maria Maggiore. (Wikimedia Commons)

Why all this focus on David? Allusions to David would bring to mind the glory days of Israel’s history, when the kingdom reached its peak in terms of its political power and influence in the world. But that’s not all.

God promised David and his descendants an everlasting dynasty: “... your house and your kingdom shall be made sure for ever before me; your throne shall be established for ever” (2 Samuel 7:16). This dynasty would have worldwide influence: the Davidic king would rule over all the earth, nations would bow down before him, and in him all peoples would find blessing (cf. Psalms 2:8; 72:8–11, 17; 110:6).

And God promised that one day, a new son of David would come — someone who would rescue God’s people from their enemies, restore the kingdom, and extend its reign to all nations (Isaiah 11:1–10; Amos 9:11–2).

Think about the excitement an ancient Jew would have felt in reading about the great King David in this genealogy. Jesus is introduced as a “son of David” (1:1). Then the genealogy traces the descendants of Abraham down to “David the king” (Matthew 1:6) and goes on to list the kings of Judah flowing from David’s line (Matthew 1:7–10).

We can imagine people wondering, “Could this Jesus be the son of David — the one for whom we’ve all been waiting, the one who will bring back the kingdom and free us from our enemies?”

But then in verse 11 comes a major turning point in the genealogy which issues a somber note for Jewish readers — a sudden, sharp minor chord in the genealogy’s triumphant march through David’s royal descendants:

“. . . and Josiah the father of Jechoniah and his brothers, at the time of the deportation to Babylon” (Matthew 1:11).

Here in this one verse, Matthew sums up six centuries of Jewish anguish, suffering, and oppression. Matthew highlights the Babylonian deportation not so much as a chronological marker, but as a signpost signaling a tragic shift in the story of Israel: the end of the Davidic monarchy.

These words recall how all of Israel’s hopes surrounding the Davidic kingdom were crushed in 586 B.C., when the Babylonians conquered Jerusalem, destroyed the Temple, and carried the people and even their king into a most humiliating exile.

This exile was not simply a painful memory from the distant past, but an abiding reality for the Jews in Jesus’ day, who continued to feel the effects of this devastating loss. For most of the six centuries following the Babylonian exile, the Jewish people continued to suffer oppression under the hands of various foreign nations up to the time of Jesus, when the Romans ruled the land.

For hundreds of years, the Jews were a nation without control over their own land and a people without their own king, a son of David, sitting on the throne.

The end of the kingdom was not simply a political disaster or military defeat. For a long time, God’s prophets had been reminding the people that Israel’s strength depended not on military might, economic wealth, or political maneuvering, but on covenant faithfulness to the one true God.

Israel’s law taught them that if they broke their covenant relationship with Yahweh, they would suffer the curse of exile, in which even their king would be carried away by a foreign nation and God would no longer be with them (cf. Deuteronomy 28:32–36; 31:16–18). This is exactly what happened at the time of the deportation to Babylon (cf. 2 Kings 24).

With Matthew’s mention of the Babylonian exile, all the sadness, frustration, and despair that surrounded the first-century Jews’ experience of suffering and oppression would ring loudly in their ears.

All this is summed up in this one short verse about the exile (Matthew 1:11), and the genealogy continues these somber notes and minor chords by listing the next two generations of exiled Davidic descendants up to a man named Zerubbabel in verse 12.

God offered the Jews some hope during this period of suffering and exile. He sent his prophets to tell how a new Davidic king would be raised up — a messiah (“anointed one”) who would restore the kingdom and bring about the New Covenant era in which there would be forgiveness of sins and blessing for the whole world.  Most first-century Jews reading Matthew’s genealogy would be longing for these promises to be fulfilled.

Matthew plays upon those hopes in verse 13, where the genealogy slowly begins to change keys again. Consider the dramatic shift between verse 12 and verse 13.

In verse 12, Matthew mentions Zerubbabel, who was the last of the Davidic descendants in Matthew’s genealogy recorded in the Old Testament — another tragic note. What happened to the royal line of David generations after Zerubabbel had been uncertain, for it had not been recorded in the Scriptures — until verse 13 of Matthew’s Gospel.

Verse 13 offers a sign of new hope, showing for the first time how the Davidic royal line continued throughout the centuries even after Zerubbabel! This, no doubt, would stir excitement and anticipation: the Davidic line continues! Here are the descendants of the kings! Perhaps we will find the messiah at the end of this line!

The genealogy builds a hopeful momentum as it introduces each descendent after Zerubbabel — the royal men who were previously unrecorded in Scripture: Abiud, Eliakim, Azor, Zadok, Achim and so on.

Finally, it reaches the peak of its crescendo when Matthew presents “Joseph the husband of Mary, of whom Jesus was born, who is called Christ” (1:16). Here, the chorus resounds at the climax of the whole genealogy: Jesus is the “Christ”— the messiah God had foretold would restore the kingdom and bring to completion his plan of blessing the entire world!

Emmanuel: God with us

The chorus continues into verses 18–23, in which Matthew highlights two more titles for this great royal Son. First, Matthew shows us how this child’s very name has great importance. He shall be called “Jesus,” which literally means “God saves.”

Why is he given this name? Matthew tells us through the angel’s explanation to Joseph: “[A]nd you shall call his name Jesus, for he will save his people from their sins” (1:21).

Here we see that Jesus’ name in verse 21 is the answer to the problem of the Babylonian exile in verse 11. Remember, the Jews viewed their exilic condition not simply as a political or military problem, but as a sin problem. According to their prophets and their law, it was covenant unfaithfulness that brought about their exile and oppression.

Thus, Jesus (“God saves”) comes to “save his people from their sins,” thereby saving the Jews from the real exile — which is not being chained down by the Babylonians or Romans, but being enslaved to the real oppressor, the devil, who has a hold over all humanity through the chains of sin and death. 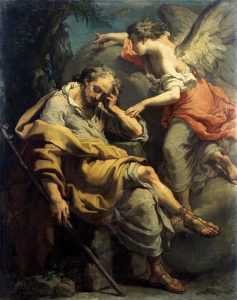 Of all the titles for Jesus that Matthew highlights, perhaps the most profound one comes right at the end of his first chapter. Jesus is called “Emmanuel,” which means “God with us” (Matthew 1:23).

We cannot understate how much this must have meant to ancient Jews. Ever since the first sin, when Adam and Eve “hid themselves from the presence of the Lord” (Genesis 3:8), God has been working to restore communion with sinful humanity.

And God planned to use Israel as his chosen people and the Davidic king as their leader and representative in order to reach the nations and gather all people back into communion with the one true God.

But without their kingdom, without a Davidic king, and still suffering under foreign domination, some first-century Jews might have wondered what happened to God’s great promises for their nation and felt somewhat abandoned. Was God still with his people?

But Matthew triumphantly proclaims that the royal child at the end of the genealogy is the answer to their hearts’ deepest longings. Not only is he the Christ — the anointed Davidic king who will restore the kingdom. And not only is he Jesus, the one who will save his people from their sins, he is Emmanuel — God with us. God is with his people again!

Edward Sri, Ph.D., is a theologian, international speaker, and author of several best-selling books. He is the presenter of several faith formation programs used around the world and the host of the podcast “All Things Catholic.”