For Italian COVID-19 survivor, brush with death was 'a call to evangelize'

The last few months have been a difficult time for an Italian living so far from home. Italy was the first country after China to be dramatically hit by the coronavirus (COVID-19) pandemic. As casualty figures soared, I hung to the news, texts, and phone calls from people back home.

My father, a doctor in Rome, was working in a nursing home with patients, some of whom eventually contracted the coronavirus. His situation, and thoughts of friends and relatives dealing with the impact of the virus, often kept me up at night back here in Los Angeles.

One morning I woke up to a text from my sister. A close friend, Giovanni De Cerce, had become seriously ill with the coronavirus and was in the hospital.

Giovanni, or “Gianni” as we’ve always known him, is in fact more than a friend. My sister and I both belong to the Neocatechumenal Way, an itinerary of post-baptismal Christian initiation in which Gianni and his wife had guided us for many years as catechists.

A father of four children, he accompanied our youth group to three World Youth Days and was there to help me in times of personal suffering and despair. He was, in short, crucial to my staying in the Church until today.

I was relieved to hear that Gianni recovered from the virus after more than a month in the hospital. But I was surprised to learn that Pope Francis had invited him to attend a special prayer service: a May 30 recitation of the rosary in the Vatican Gardens marking the end of the Marian month of May. The event united Marian shrines around the world to pray for an end to the pandemic simultaneously.

The pope’s guests were chosen to represent people impacted by the virus: Two doctors, a nurse, a hospital chaplain, and a journalist were among those invited to represent their peers. Gianni and an Italian nun, Sister Zelia Andrighetti, superior general of the Daughters of St. Camillus, were there to represent coronavirus survivors, and each led a decade of the rosary during the service.

I caught up with Gianni over the phone for his thoughts on coming so close to death, the power of prayer, and what comes after surviving the coronavirus.

What was your reaction when you got the invitation to pray with the pope?

I felt incredibly grateful. I asked myself: Why me, among so many people who had COVID-19? But then I realized I was being summoned as a representative of all those who suffered this illness.

When I received the phone call with the pope’s invitation, the first thing I did was to call the man who shared the room with me in the hospital, and I told him, “I am taking you with me. I do not know why I was chosen, but know that you are coming with me.” He was overjoyed to hear this.

Can you tell us a little about your brush with COVID-19?

I arrived at the hospital after a traumatic episode. I had started to feel somewhat sick, but I had no idea that it might be coronavirus.

One morning, as I was sitting in the kitchen, I collapsed to the floor with a respiratory crisis and lost consciousness. Since we were all in lockdown, all my family was there at the time, and my daughter performed CPR on me.

The first image I saw when I opened my eyes was my daughter, tears streaming down her face. She was crying because she had managed to bring me back. When I entered the ambulance, I said goodbye to my children and to my wife, not knowing whether I was going to see them again. 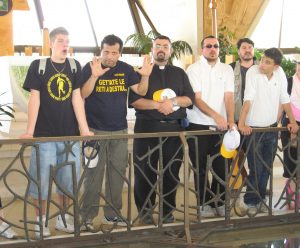 De Cerce (second from left) with youth from Rome at St. Peter's Church in Capernaum, during a pilgrimage to the Holy Land in 2009. (Gianni De Cerce)

How about the time you spent in the hospital? What was the hardest part?

From the physical point of view, the hardest part was the constant feeling of suffocation, the shortness of breath.

But for me the greatest suffering was not the physical pain, but rather not knowing whether I would survive. Some nights I had to fight a hard battle against evil thoughts. The devil kept telling me: If you have to die, couldn’t it at least be more simple? Why such a horrible death?

This was my third close encounter with death. I survived melanoma in 2000 and a serious heart attack in 2014.

The other struggle for me was with my feeling of not being ready, of clinging to this earth. God had to teach me a lot of humility and show me that I do not live up to my words. Many times, in my activity as a catechist, I found myself preaching about the desire to go to heaven and stay with God. But in those nights, I begged the Lord to let me remain on this earth. This made me very humble, made me see that I am very weak, despite what I preach.

I had an experience similar to St. Peter’s, a man who thought he was ready to give his life for Christ, but had to realize that he was not capable of doing that.

What helped you in those moments?

Praying the rosary helped me a lot. At times, I was so tired and confused that I did not have the strength to even utter a prayer; I just listened to the rosary being prayed. And then I had moments when I was just silent, listening to God. Every morning I listened to Pope Francis’ daily Mass, and I was touched immensely by his prayer on March 27th.

But most of all, I felt the strength of the prayers that had been said for me. I experienced fear, many times, but I was never utterly depressed or lost. I was consoled by a quote from Nelson Mandela, who said that courage is not the lack of fear, but it is one’s triumph over fear.

This is essentially a Christian sentence, a perfect depiction of Christ risen, who triumphs over our fears. I do not consider myself a courageous man, but I have to say that God gave me courage. And this was not because of my faith or my strength, but thanks to those who prayed for me.

One of the most frightening things about this illness is that patients are left completely alone in the hospital, unable to see relatives and loved ones, and often die alone. It does not look like you felt alone, however, even in your isolation in the hospital.

I did not, but I was deeply touched by the experience of loneliness of those surrounding me, and this made me feel privileged of being in the Church.

The real experience of the Church is something that makes a huge difference. There is a different relationship with other people. They become brothers and sisters who are bound by ties that are simply impossible to find anywhere else.

There were people who stood up to pray for me in the middle of the night, taking turns so that every night there might be one or two or three staying awake and praying for me.

My children were also helped by their communities. The communion, this is the greatest thing that has been given to us through the Church, and this is something we experience in a particular way through the Neocatechumenal Way.

This “Way” has given us many gifts: the ability to understand the word of God in connection with the facts of our life, a living liturgy, but none is greater than the gift of this body of brothers and sisters. This a messy body at times, no doubt, a body of people who quarrel and get angry, but in this body a love for one another appears that cannot be found anywhere else [outside the Church].

For those who are not given this opportunity, Sartre’s famous saying becomes true: Hell is other people. 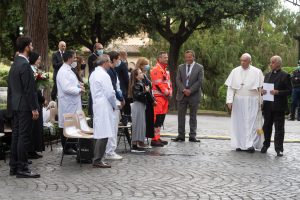 Gianni De Cerce (between Pope Francis and man in orange jumpsuit) with fellow invitees to the pope's May 30 prayer service in the Vatican Gardens. (Vatican Media)

Pope Francis recently said that “from a crisis like this one we do not come out the same as before: We emerge either better or worse.” Do you think this describes your experience?

I do. Easter Sunday was when I tested negative for the virus for the first time. This news caught me like the announcement of the empty tomb, of Christ’s resurrection. And I immediately realized God was calling me to something new. After the resurrection, Jesus invites the disciples to go to Galilee, land of the Gentiles. He invites them to evangelize.

I am very grateful to the Lord, not because he left me on this earth, but because he came to visit me three times through these severe illnesses, and he has done it to call me to follow in his footsteps. He is giving me a mission.

If only we could all understand that the cross, that the events of suffering in our lives are God’s way to make us missionaries! Then, we would not stop at simply contemplating our suffering.

The mission I am given, I feel, is to go visit people in their anguish, to go bring these anguishes a solution, a new meaning. How this will happen in practice I do not know.

Kiko Argüello [co-initiator of the Neocatechumenal Way] said once that God’s greatest gift to man is the opportunity to participate in the redemption of mankind. We think that happiness consists in having money, a good job, a nice house. But the greatest happiness is snatching people away from their personal hell.

Do you think the pandemic will make people more receptive to the announcement of the good news?

I have no doubt about it. The pandemic has helped people become aware of their own fear of death. And this awareness is a crucial precondition for the announcement of the Gospel: the realization that because of our fear of death, Satan keeps us enslaved and forces us to do his will.

It makes no sense to announce the risen Christ if we do not face the truth, and the truth is that we are slaves, we do someone else’s will, we are enslaved to someone who wants us to suffer, who wants us to remain in hell.