With COVID restrictions lifting, pastors looking to welcome faithful back should rethink their confession schedules -- and start talking more about the sacrament in the pulpit.

That's according to Archdiocese of Philadelphia evangelization director Meghan Cokeley, who said that a lack of convenient times for the sacrament of reconciliation, along with a poor understanding of its significance, are leading to declines in overall Mass attendance.

"Sin is like spiritual cholesterol, and the arteries (of the church) are clogged," she said. "This is a hidden spiritual reality, but it actually explains why there's so little life."

Cokeley said that many area faithful have advised her that traditional Saturday afternoon confession times "are terrible as far as accessibility, (especially) for young families."

Respondents to a survey by Cokeley said that Sunday mornings and weeknights were more viable for receiving the sacrament. 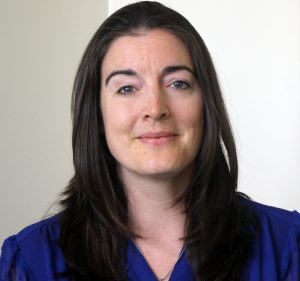 Meghan Cokeley, evangelization director for the Archdiocese of Philadelphia, is pictured in this 2016 file photo. (CNS photo/Gina Christian, catholicphilly.com)

Aside from logistical concerns, however, the lines for confession have been shrinking for years.

A study by the Center for Applied Research in the Apostolate found that in 2005, 42% of Catholic adults said they never went to confession, a number that rose to 45% in CARA's 2008 follow-up polling. The latter study found that 30% participated in the sacrament of reconciliation less than once a year.

Numbers from a 2015 Pew Research survey were slightly more encouraging, yet still found a "lukewarm embrace of confession."

But the data that really shocked Cokeley came from a recent five-year study by the Malvern-based Catholic Leadership Institute, which surveyed some 17,000 practicing Catholics from the Philadelphia archdiocesan area.

"Seventy-five percent of them reported that they go to confession once or twice a year or never, and that 'never' portion was almost 30%," Cokeley told CatholicPhilly.com, the archdiocesan online news outlet. "These are regular Massgoers ... our ministry leaders, parish council members, finance council people."

Cokeley said the issue strikes to core of the faith itself.

"The Gospel is conversion, turning away from sin and being faithful to the Gospel," she said. "What this is telling me is that we're actually missing the heart of the matter."

Part of the problem, she said, is due to "a very comfortable Catholicism" that prevails in parishes and in the overall culture.

"There's just this logic that somehow ... Jesus exists to make me feel good about myself," she said.

That kind of individualism and self-affirmation have profound social consequences, said Cokeley.

"If we ourselves aren't dealing with our sin regularly, we're not going to have this healthy responsiveness to the evil that we're seeing around us," she said.

Although they're not in line for confession, many Catholics -- about 89%, according to Pew's 2015 study -- nonetheless believe sin exists.

But fear and shame often keep faithful away from the sacrament, said Cokeley -- and unnecessarily so, since "conversion is not condemnation."

"We have to start talking about the call to conversion as an expression of Christ's love, that he wants our burdens pulled off of us, and he wants our chains broken," she said.

Addressing sin is an "unbinding of the heart," she said, which is why the pivotal aspect of the sacrament is "not the confessing, but the receiving of grace to break the chain, to walk away from it."

"When the priest utters those words, 'I absolve you' -- that word literally means to break," she said. "So when he speaks those words, the chains are broken, and it doesn't have anything to do with how we feel about it. It actually happens."

A reawakening to the need for regular confession is crucial for the spread of the Gospel, said Cokeley, who said that "when we're introducing people to the person of Christ, it has to be the real Jesus."

"I think unfortunately in evangelization sometimes we almost do a bait and switch," she said. "We have a soft, easy Jesus, and then we tell people about the hard stuff later. Jesus needs to be presented in truth from the beginning."

For both first-time and lifelong penitent, the sacrament of reconciliation is one of healing and hope, she said.

Encountering Christ is a "radical, beautiful call ... that really fulfills the deepest desires of our hearts," said Cokeley.

Gina Christian is a senior content producer for CatholicPhilly.com, the digital newspaper of the Archdiocese of Philadelphia.