In many ways though, he has spent a lifetime admiring Father McGivney, a feeling that intensified when he was appointed rector of the Basilica of the Immaculate Conception in Waterbury.

"There is an added closeness in recent years, now that I'm in his parish," Father Sullivan said of the basilica. "There is no church that has a greater love of Father McGivney than here. His faith was formed here in Waterbury. He was baptized here, it's where he received his sacraments. He worked in the spoon factory. He said his first Mass here."

To be rector of the basilica at the time of Father McGivney's beatification, Father Sullivan said, is "a joy and a privilege."

"I feel incredibly privileged to be a priest, the pastor that is home to Father McGivney," he told the Catholic Transcript, magazine of the Archdiocese of Hartford, Connecticut. "What happened here (in Waterbury) inspired him to do what he did in New Haven and beyond."

Father McGivney, the founder of the Knights of Columbus, will be beatified Oct. 31 during a Mass celebrated by Cardinal Joseph W. Tobin of Newark, New Jersey, at the Cathedral of St. Joseph in Hartford. He will be the first U.S. parish priest to be beatified and will be given the title "Blessed."

The son of Irish immigrants, Father McGivney (1852-1890) was born and raised in Waterbury and was ordained a priest in 1877 for what is now the Hartford Archdiocese. He founded the Knights at St. Mary's Parish in New Haven, Connecticut, in 1882.

In many ways, by the examples he demonstrates, Father Sullivan has been walking side-by-side with Father McGivney for many years and praying for his sainthood.

Father Sullivan grew up in Waterbury and knew of Father McGivney. His family home was only a short distance from the McGivney family home on the banks of the Naugatuck River, a century apart. "I'm living in a similar area with a man who could become a saint," he said.

At age 18, as a freshman at Providence College in Rhode Island, Father Sullivan became a member of the Knights of Columbus.

He remembers participating as an altar server at the Mass of Father McGivney's reentombment from Waterbury to St. Mary's Church March 29, 1982.

For 12 years, Father Sullivan was a parishioner of St. Thomas Church in Thomaston, where Father McGivney died in the rectory after battling tuberculosis and severe pneumonia.

While walking the streets of Waterbury, Father Sullivan often passes the monumental bronze statue of Father McGivney at the intersection of Grand and Meadow streets, and prays to him.

For the past 23 years, Father Sullivan has planted flowers and waters them regularly in St. Thomas Cemetery in Thomaston around a circle where seven priests are buried who served at St. Thomas Church, including Father Eugene Gaffney, the first pastor of St. Thomas in Thomaston, whom Father McGivney took over for as pastor and had been friends with.

On Father Sullivan's dresser is a relic, a piece of clothing belonging to Father McGivney that he kisses each night before going to sleep. He had it in his pocket on the day of his ordination.

A life-changing moment that convinced Father Sullivan and his family that Father McGivney was praying on their behalf occurred in 2006 when one of his brothers, Dennis, suffered a massive heart attack at age 41, drove himself to Waterbury Hospital and then went into cardiac arrest.

His heart stopped beating for 26 minutes and doctors were ready to give up but gave him five more minutes. Doctors got a response in that time frame, but the situation still looked grim.

Father Sullivan's sister, Sister Veronica Mary Sullivan, began praying to Father McGivney and later -- with her brothers, including Father Sullivan -- went to his tomb in St. Mary's Church in New Haven to pray to him to intercede for a miracle.

A Sister of Life who is a former cardiac nurse and, Sister Veronica felt Father McGivney's presence and that he was asking her what needed to be done. She told Father McGivney how her brother could be saved.

Before arriving back at the hospital, the family received a call that Dennis would be OK and there would not be any brain damage. Dennis went on to live life to the fullest for another 12 years.

In 2019, Father Sullivan was honored by the Knights of Columbus with its 44th annual Father Michael J. McGivney Award for advancing the ideals embodied by their founder. Father Sullivan has organized Masses atop Holy Land USA in Waterbury dedicated to Father McGivney. 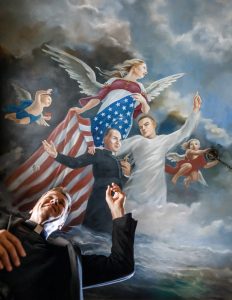 Father James Sullivan, rector of the Basilica of the Immaculate Conception in Waterbury, Conn., points up to a mural of Father Michael J. McGivney painted by Paul Armesto, which adorns the ceiling of the Father McGivney room inside the basilica complex, in this July 6, 2020, photo. The beatification ceremony for Father McGivney, founder of the Knights of Columbus, will be celebrated Oct. 31 at the Cathedral of St. Joseph in Hartford, Conn. (CNS photo/Aaron Joseph, courtesy Archdiocese of Hartford)

Today, the Basilica of the Immaculate Conception has a room inside the church complex dedicated to Father McGivney with a mural of the priest painted on the ceiling by artist Paul Armesto.

The mural also includes Father Thomas Conway, a World War II chaplain; the motto of the Knights of Columbus, which is charity, fraternity, patriotism and unity; St. Michael the Archangel; and the Holy Family. Father Conway, the last Catholic chaplain to die in combat in World War II, faced several days at sea under horrific conditions a month before the end of the war.

In the Father McGivney parlor is a new painting by artist Terry Waldron. The painting, given to Father Sullivan, shows Father McGivney on the wooden stairs leading to St. Thomas Cemetery in Thomaston.

Once a week, Father Sullivan walks those stairs to think about Father McGivney.