At the beginning of the Easter Vigil, the high point of the Church's liturgical year, the congregation assembles outside the church, usually on a sidewalk or in a parking lot. In the center of the gathering is a fire, surrounded by the priest and ministers. Greetings are exchanged, prayers are said, and a large candle is blessed and lit. This candle, the Easter Candle, is then carried into the darkened church, stopping at several points along the way as the congregation sings, “Christ, our Light. Thanks be to God!” Small candles are lit off of the Easter Candle, and as the once solitary point of light is shared from person to person, the dark space is transformed into a bright and welcoming church.

The Easter Vigil features a chanted prayer called the “Exsultet,” originally composed between 400 and 600 A.D., which describes the Easter Candle as, “a solemn offering, the work of bees and of your servants' hands, an evening sacrifice of praise.”

Fire and light are potent symbols within our life of faith, stretching back to the very story of creation, when God said, “Let there be light, and there was light” (Gen 1:3). The book of Exodus tells us that the angel of the Lord called Moses from the midst of a burning bush that was entirely aflame yet remained unconsumed (cf. Ex 3:1-4). It was while investigating this remarkable sight that Moses received his vocation to lead the Israelites out of slavery into the promised land. During their exodus from Egypt, “The Lord preceded them, in the daytime by means of a column of cloud to show them the way, and at night by means of a column of fire to give them light. Thus they could travel both day and night” (Ex 13:21).

In St. Jerome's Latin Vulgate translation of the Bible, Exodus 34:29-35 says that when Moses came down from the top of Mount Sinai carrying the tablets of the Ten Commandments, it appeared that "his face was horned" from conversing face-to-face with God. The English translation of the Vulgate notes that the word “horned” carried the connotations of “shining, and sending forth rays of light like horns.” Michaelangelo’s statue of Moses sculpted for the tomb of Pope Julius II famously depicts Moses with these horns. 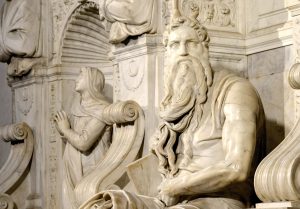 Statue of Moses by Michelangelo, in the church of San Pietro in Vincoli, Rome. (Alvesgaspar/Wikimedia Commons)

The Gospel of Luke tells us about the elderly Simeon encountering Mary and Joseph as they came to the Jerusalem Temple to present the newborn Jesus in accordance with Jewish law (cf. Lk 2:22–35). Simeon, who had been promised by God that he would not die until he had seen the Messiah, prophesied that Jesus would be “a light for revelation to the Gentiles and the glory of the people of Israel” (Lk 2:32). Our liturgical celebration of this presentation of Jesus in the Temple is celebrated on February 2, 40 days after Christmas. This feast is also called “Candlemas,” as in many churches families are encouraged to bring candles from home to be blessed in honor of Jesus, the “true light, which enlightens everyone” (Jn 1:9).

In our churches, we use candles to symbolize the glorious column of fire that filled the Temple. At the dedication of a new church, the Bishop solemnly anoints the walls of the building with Sacred Chrism in several places, and later these points will be remembered with candle sconces. In some churches, these memorial candles will be lit on the dedication anniversary. In another part of the dedication rite, after anointing the new altar, the Bishop places a censer filled with burning incense on top of the stone, creating a literal column of smoke and fire that recalls the cloud of God's glory that filled the Jerusalem Temple at its dedication.

The minister who is in charge of the incense during a liturgical celebration is called the “Thurifer,” and the censer is called a “Thurible.” One of the largest thuribles in the world is the “Botafumeiro” in the Cathedral of Santiago de Compostela, which holds around 88 pounds of incense and charcoal.

We encounter fire in our ongoing Christian pilgrimage, as well. We may recall the Gospel of Luke's post-resurrection story of the two disciples on the road to Emmaus, who encountered Jesus along the way but were prevented from seeing His true identity (cf. Luke 24:13–35). The Gospel tells us that they talked about how they had hoped that Jesus was the Messiah, but that his death had shattered their hope. “Then beginning with Moses and all the prophets, [Jesus] interpreted to them what referred to him in all the scriptures,” Luke writes. Later at table, as Jesus was revealed to them “in the breaking of the bread,” the disciples asked one another, “Were not our hearts burning while he spoke to us on the way and opened the scriptures to us?” (Lk 24:32).

On the first Pentecost, 50 days after the Resurrection of Jesus, flames of fire descended upon the Apostles gathered in the Upper Room. This feast is considered the birthday of the Church, because on that day, the Holy Spirit empowered the Apostles with the graces they needed to leave the Upper Room and to begin to preach the Gospel to the ends of the earth. In the Sacrament of Confirmation, we too are sealed with the Holy Spirit and empowered to preach the Gospel through our words and good works.

The Pentecost anointing with the Holy Spirit, symbolized by fire, is why artists often depict the Sacrament of Confirmation with intertwined images of a dove and a flame. The Orange Fruit Dove, a small bird native to Fiji, is also called the Flame Dove, making it both a dove and a flame. 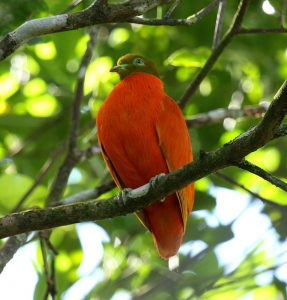 In his first letter to the Corinthians, St. Paul tells us that our good works, which are like “gold, silver, precious stones, wood, hay, or straw,” will be “revealed with fire, and the fire itself will test the quality of each one's work” (1 Cor 3:13). The Church has traditionally interpreted this cleansing fire as the state of Purgatory, where the hearts of the faithful who died in a state of grace will be purified so that they might “achieve the holiness necessary to enter the joy of heaven” (CCC 1030–1031). We can prepare our souls for this cleansing fire by regularly taking advantage of the Sacrament of Penance, by being nourished by the Eucharist, and by practicing the corporal and spiritual works of mercy, which are those gold, silver, and precious stones that fire cannot destroy.

In the words of St. Catherine of Siena, “If you are what you ought to be, you will set the world on fire!” Click To Tweet

Doers of the Word: Meet the 2020 Cardinal's award honorees