How the 'miracle' of the Catechism made history 30 years ago

Dorothy Day put her finger on the problem. The co-founder of the Catholic Worker Movement, whose orthodox faith existed side by side with radical social views, said she didn’t want to be called a saint because then people would stop paying attention to what she said. (It’s hard to tell what Day would say now, when her canonization cause is underway and she has the title Servant of God.)

Obviously, the situation is very different with the Catechism of the Catholic Church — not a person but a book, and therefore not a candidate for sainthood. Yet 30 years after it was published, the catechism may be at risk of becoming the literary equivalent of a saint — an object of respect and veneration that holds an esteemed place in the Church but doesn’t receive nearly the attention it deserves from many of the faithful.

If that is so, it’s a great loss, although not so much for the catechism as for the people who don’t read it. In three decades this volume has aged remarkably well, and, though not exactly what you’d call a good read, is a book that, read slowly and thoughtfully, is capable of engaging attention, uplifting minds, and now and then even warming hearts — perennially timely precisely because of its timelessness.

“This catechism is conceived as an organic presentation of the Catholic faith in its entirety,” the text boldly announces at the start. Today, just like 30 years ago, that is a dauntingly ambitious goal that it succeeds remarkably well in reaching.

Here some history is in order.

In January 1985, St. Pope John Paul II convened an “extraordinary general assembly” of the World Synod of Bishops to discuss successes and failures in implementing the Second Vatican Council in the preceding two decades since it ended. Well up among the problems of those times was the rise of public dissent — and, with it, public confusion — in regard to the teaching of the Church. 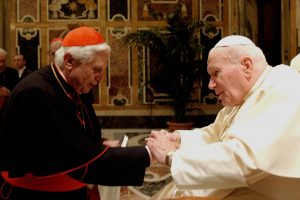 Now, 400 years after the Catechism of the Council of Trent, wasn’t the time ripe for a new universal catechism that would set out Catholic doctrine in light of Vatican II as its predecessor had done after Trent?

The synod’s answer was a resounding yes. The pope readily agreed. Conceptually, at least, the Catechism of the Catholic Church had been born.

A commission of 12 cardinals chaired by Cardinal Joseph Ratzinger, prefect of the Congregation for the Doctrine of the Faith, was established to draft the text, assisted by a committee of seven diocesan bishops. Looking back many years later, Cardinal Ratzinger — now known to the world as Pope Benedict XVI — called it “a miracle … that this project was ultimately successful.”

One obvious reason for his surprise was the sheer magnitude of the project. The synod participants had asked for “a catechism or compendium of all Catholic doctrine regarding both faith and morals” to serve as a point of reference for national catechisms. The presentation of doctrine, they said, had to be “biblical and liturgical” as well as “suited to the present life of Christians.”

That would have been asking a lot in the best of circumstances, and the circumstances surrounding the writing of the catechism were far from best. In fact, not everyone welcomed the idea of a universal catechism, especially those who found doctrinal dissent and confusion congenial to their purposes and were happy to have it continue. Looked at from that perspective, an authorized text setting out the faith of the Church in black and white would only get in the way.

Despite the opposition, however, over the next seven years Cardinal Ratzinger’s “miracle” moved steadily ahead. Written in French, nine separate drafts were prepared. The commission of cardinals sent a preliminary text to the world’s bishops seeking their comments, and soon the responses were pouring in. While reaction to the text was generally positive, 24,000 separate comments arrived proposing additions, subtractions, and changes.

The approved text was finally published on Oct. 11, 1992 — significantly, the 30th anniversary of the opening of Vatican Council II — together with an “apostolic constitution” by Pope John Paul titled “Fidei Depositum” (“The Deposit of Faith”).

Just as St. Pope John XXIII had convened the council with the aim of safeguarding the body of doctrine entrusted to the Church and making it more accessible, so also, Pope John Paul said, the Catechism of the Catholic Church now stood as “a sure norm for teaching the faith and thus a valid and legitimate instrument for ecclesial communion.”

Citing the first letter of St. Peter, the pope said the catechism was intended for the Church’s pastors in their capacity as teachers, for lay Catholics seeking to deepen their faith, and for anyone looking for “an account of the hope that is in us … who wants to know what the Catholic Church believes.” 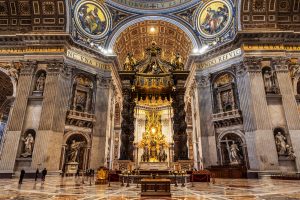 The interior of St. Peter's Basilica at the Vatican. (Shutterstock)

Adopting the same structure as the Catechism of the Council of Trent, the text organizes its 2,865 numbered paragraphs in four major sections (“pillars”): the creed, the liturgy and sacraments, the Christian way of life considered according to the order of the Ten Commandments, and prayer discussed in reference to the petitions of the Our Father.

In presenting the catechism, Pope John Paul emphasized the Christ-centered nature of this structure: “Having died and risen, Christ is always present in his Church, especially in the sacraments; he is the source of our faith, the model of Christian conduct, and the teacher of our prayer.”

While doctrinal formulations are the heart of the catechism, the text includes a lot else besides. One of the features of the catechism is its extensive use of material drawn from sources that include the Old and New Testaments, the Fathers and doctors of the Church, ecumenical councils, papal documents, and canon law. In this way the reader comes in touch with the lived faith as it has been transmitted over the centuries and expressed by persons as diverse as St. Augustine and St. Thomas Aquinas, St. Teresa of Ávila and St. Thérèse of Lisieux.

But for readers who don’t want quite so many words, the Vatican in 2005 published a Compendium of the Catechism of the Catholic Church described by Pope Benedict XVI as a “faithful and sure synthesis” of the older, longer work. Organized on the same plan as the catechism, he said, it states the elements of Catholic belief more briefly with the aim of making the catechism “more widely known and more deeply understood.”

The fourth section of the catechism, a treatment of prayer based on the Our Father, concludes with a prayer by the fourth-century doctor of the church St. Cyril of Jerusalem.

Thirty years later, the great doctor’s words provide a fitting conclusion to this remarkable work: “Then, after the prayer is over you say ‘Amen,’ which means ‘So be it,’ thus ratifying with our ‘Amen’ what is contained in the prayer that God has taught us.”