How insomnia led me to a friendship with 'Sleeping St. Joseph'

It was the fall of 1993, some 28 years ago. I can still hear my mother and father report back to me from the parent-teacher conference they attended at my new elementary school.

“She’s excelling academically and has made a number of new friends,” my new teacher told them. “But she’s been nicknamed ‘Worry Wart’ by some of the kids in the class. Elise seems to worry about everything.”

The nearly three decades since that conference have involved a tiresome effort to overcome (or at times ignore) a mind plagued by anxiety.

By this point in adulthood, I’ve accepted that I am disposed to worry and “what-if.” Surmountable obstacles, moments of change — any number of scenarios, really — can send me into a panic or a cycle of compulsive rumination and doubt.

A cocktail of genetics and life’s circumstances are at the root of my situation; good counsel and a supportive network have made it possible to manage.

Humor helps. When I’m having a particularly difficult spout of worrying, I turn to “The Worst Case Scenario Survival Handbook” (Chronicle Books, 1999), a humorous gift from my father that I keep on my nightstand. This gem provides step-by-step instructions for how to survive extreme, adverse conditions, such as “How to Escape from a Bear” and “How to Land a Plane.” It’s a surefire way to get some perspective.

As a woman of faith, I struggle with how to reconcile the tension between my sincere belief in the word of God and my habit of worrying.

I don’t find Gospel passages in which Jesus counsels his disciples not to let their hearts be troubled to be comforting. Nor do I respond well to the oft-quoted advice, “Pray, hope, and don’t worry,” attributed to St. Padre Pio.

That kind of counsel makes me worry about worrying. It would be humorous, if it weren’t so hard.

I find more comfort in Jesus’ admonition of his disciples for sleeping while he was in agony. “You get it,” I murmur in prayer when reading the accounts of that night in the Garden of Gethsemane.

Lately, my anxiety has manifested itself in insomnia, that cruel condition in which one either cannot fall or stay asleep. After my mother received a devastating medical diagnosis a few years ago, I found myself in a vicious pattern of lying awake for hours, unable to calm my mind or slow the beating of my heart. It’s hard to discipline my imagination as it wanders through the course of her disease and our family life without her physically present in it.

Objectively, I know that worrying will not ease her burden, nor will it help me to be a more supportive daughter. Nonetheless, I’ve watched countless hours tick by in the darkness and stillness of the night.

Sometimes praying the rosary provides comfort. Other times I read a novel to find respite in a fictional world. But more often than not, there’s just a feeling of anguish and restlessness. Sleep is pretty important to the functioning of the mind and body; going without it for long periods of time is definitely not recommended.

About two years after my insomnia began, I stumbled upon a statue of St. Joseph in the foyer outside my spiritual director’s office. St. Joseph was lying down on his right side, fast asleep. I was struck by the image. He looked so serene.

He had what I desperately wanted: REM sleep. More importantly, he had a look of rest that had reached down into his bones and soul.

The image stayed with me. The Gospels recount that the Holy Family found themselves in some pretty terrifying situations at their outset: an arduous journey before Mary was to give birth; a delivery in a stable; and a flight into Egypt to escape a malevolent tyrant all colored their first years together. 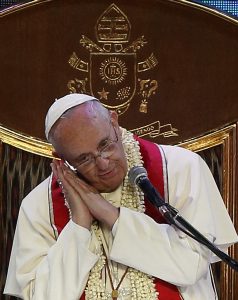 Pope Francis shows the sleeping posture of the statue of St. Joseph he keeps on his desk while giving a talk during a meeting with families in Manila, Philippines, in this 2015 file photo. (CNS/Paul Haring)

Yet St. Joseph was able to sleep. And it was during that sleep that God communicated to him how he was to protect and care for his family. Sleep was where St. Joseph’s fear became no match for his faith.

I did some investigating and learned that Pope Francis has this image of St. Joseph on his desk. It was one of the items he brought from Argentina to Rome when he was elected pope.

Speaking to families during his 2015 visit to Manila, Pope Francis said of St. Joseph: “Even when he is asleep, he is taking care of the church! Yes! We know that he can do that. So when I have a problem, a difficulty, I write a little note and I put it underneath St. Joseph, so that he can dream about it! In other words I tell him: Pray for this problem!”

I bought a statue of “Sleeping St. Joseph” to put on my nightstand. In a belief bordering on sacrilege, I half expected it to function like a talisman that would cure me of my insomnia. Instead, it’s served as a great comfort to me when I find myself awake.

As the minutes on the clock tick forward, I look over to St. Joseph with gratitude that one of us is sleeping. I glance at the notes I’ve placed beneath his heart and remember that like any good father, he’s bringing my worries before Jesus.

Life is filled with countless things about which we have legitimate reason to fret. Maybe in this Year of St. Joseph, we can follow his example of handing our problems over to God to hold until the sun rises.

After all, the Son does rise, making even the most worrisome things new.

Elise Italiano Ureneck is a communications and public relations professional who writes from Boston.