Andrew Walther and the saints who stalk us

I sometimes find myself stalked by saints.

It’s not as spooky — or creepy — as it may sound. “Accompany” might be a more accurate verb, but “stalk” captures the drama.

In New York, where I live, reminders of St. Elizabeth Ann Seton, St. Frances Xavier Cabrini, and Dorothy Day seem to pursue me at every turn (Archbishop José H. Gomez once said of Day: “I don’t know if she’s a saint, but I know she makes me want to be one”).

They all lived here and poured out their hearts, souls, and minds for the love of God. The feast day of “Mother Cabrini” is Nov. 13, so she’s always especially on my mind this time of year — the same month the Catholic Church celebrates All Saints’ Day and All Souls’ Day. 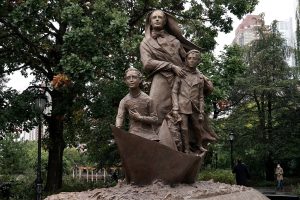 A statue of St. Frances Xavier Cabrini, patron of immigrants, is seen after its unveiling Oct. 12, 2020, in the Manhattan borough of New York City. (CNS photo/Carlo Allegri, Reuters)

We are particularly blessed with many saints here in the northeast. The latest to be raised to the altars is a man who walked our streets and ministered to our ancestors here. Just a few hours after his beatification on the eve of All Saints’ Day, I visited the tomb of Father Michael McGivney, best known as the founder of the Knights of Columbus.

He died at the age of 38 from a pandemic, but did not waste time in spending himself for the love of Christ and his people.

On my knees at his tomb, I begged for a total healing for my friend, Andrew Walther, who was battling leukemia. A Los Angeles native, he had worked for the Knights for 15 years, most recently as vice president for Communications and Strategic Planning, before joining EWTN News as its president this year.

It seemed wrong to be at a festival for Father McGivney’s beatification at St. Mary’s Church in New Haven — where we had prayed together before with his family — celebrating his friend and new “blessed” without him.

Earlier in the day, before getting on the train to New Haven, I found myself hugging my copy of the authoritative illustrated history of the Knights of Columbus he and his wife Maureen had authored.

It was the closest I had been to Andrew in a long time, due to the danger posed by the coronavirus (COVID-19) for someone undergoing chemotherapy and a bone-marrow transplant. In olden times, our frequent visits usually included a long meal and conversation. Some of those were lunches we would co-host to help bring people together around a cause, like helping Christians in the Middle East.

Even before we became close friends, I was so appreciative of his personal mission at the Knights: to encourage real Christianity in the public square and in families for the protection of life. I was so honored to be his friend. And I was so proud of the grace he allowed God to give him in suffering.

I told him not too long ago, “I love you too much to call you a saint, but if you stay on this path, Andrew, you will be one.” Well he sure did, until God took him home the next day.

I wanted a miracle for Andrew, for his wife, Maureen, their beautiful four children, and their extended families. But if I’m honest, I also feared life without him. 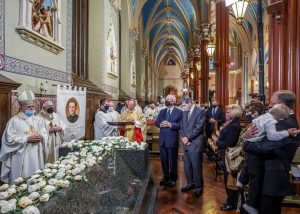 Baltimore Archbishop William E. Lori, Supreme Knight Carl Anderson and members of the Schachle family pay their respects Nov. 1, 2020, at the sarcophagus near the entrance of St. Mary's Church in New Haven, Conn., where the remains of Blessed Michael McGivney are entombed. (CNS photo/Aaron Joseph, Archdiocese of Hartford)

Under the leadership of Carl Anderson, the Knights of Columbus had already committed to helping the Christians and religious minorities of Iraq and Syria suffering a violent persecution from the Islamic State amounting to genocide. The work would expand, and Andrew would find himself in different parts of the world, working to protect lives and the very existence of Christianity in those places.

The ultimate behind-the-scenes strategist, with a servant’s heart and a passion for truth, he did more to advance the culture of life and civilization of love than those who frequently make the headlines.

He labored for the love of God. And he didn’t do it because he was a nice guy or because he wanted to have street cred for his next job, but because it was what God asked him to do. He was very clear about that, and he was relentless in building the kingdom of God in this mess of a world.

That’s why his move to EWTN this year was such a big deal. By what clearly seemed to be God’s initiative, he was moving from the Knights of Columbus, founded by a likely saint, to EWTN, also founded by a possible future saint, Mother Angelica. I saw firsthand how he trusted that they would keep him on the right path with their intercession.

When he made the move, we thought God was preparing to help lead us in a time when the forces of evil were working overtime to cause confusion and evil.

When he got the leukemia diagnosis the same month he took the new job, we told ourselves that this was obviously to purify and strengthen him. We thought about the fight ahead. Instead it seems it was to prepare him to die, to bring him to a final passion earlier than expected.

I do not like when people say that someone who has died is in a better place (please, when I die, do not say that). We have to be prepared for heaven. But I can now add Andrew to the list of the saints who stalked me.

He made me better. I look back now and realize that our conversations were about heaven. They were about being who God made us to be, so that we could be with him for eternity and bring as many people along with us as possible.

In some of our final conversations, he was more detached than ever about what the future would hold, including who might win an election. He loathed the idea of his children and Maureen being without him, but he was at peace, believing that God knows what he is doing.

I think that’s what I loved the most about Andrew. He was always solving problems with his brilliant mind, but when it came to the most important things, my amazing friend radiated humility. 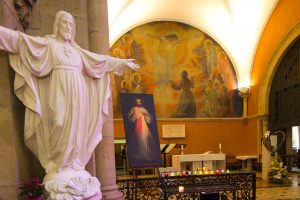 Inside the chapel of the revelation of Jesus Margaret Mary Alacoque in Paray Le Monial, France. (Shutterstock)

All of this brings me back to a passage from Mother Cabrini’s travel diaries, writing home to her sisters in Europe. She was talking about their congregation’s patron, St. Margaret Mary Alacoque, to whom Jesus gave the devotion of the Sacred Heart, when she wrote that “truly faithful and loving souls are not discouraged. Thus, our Margaret, knowing that the work she was chosen to establish came from heaven, lost neither her confidence nor her courage.”

“Completely abandoned to the infinite mercy of her beloved Jesus ... she knew how to triumph over all obstacles and was rewarded by seeing the Sacred Heart of Jesus known, loved and glorified by a great number of devotees before her death. As a reward for such generous action, Blessed Margaret Mary now contemplates in heaven the beauty of the Divine Heart of Jesus, enjoying peace, joy, and sovereign delights. She can talk to Him openly at any moment, can implore and obtain even prodigious graces. She will certainly implore them for you if you honor her as your true protectress, but more so if you imitate her. From heaven, as she contemplates the sight of what your charity accomplishes in continuing the mission that she exercised on earth with immense benefit to souls, she will console you with her powerful intercession and present your fervent prayers to the throne of God. As a reward for your zeal, she will place all of you in the loving shelter of the Heart of Jesus and obtain for you the grace to live, as she did, a life of humility, meekness, obedience, sacrifice and love.”

Andrew was God’s missionary who God is now rewarding.

I think of the time Andrew and Carl Anderson worked to get the Obama administration to recognize the Islamic State’s campaign of persecution as “genocide.” We had the opportunity to celebrate a Chaldean Mass at the Catholic Information Center, the closest tabernacle to the White House. Days later, then-Secretary of State John Kerry declared ISIS guilty of committing genocide against Christians, Yazidis, and Shia Muslims.

We saw it as a miracle. God had used faithful servants as instruments along the way.

The only way I can make sense of Andrew’s death is in dying so young, we all have to pay more attention. This was a saint who lived among us. He had heroic virtue. We have to live this way, too. Andrew, I know you will help us!