A lifetime of love: One woman’s quest, even after her death, to bring her husband to God

Félix and Élisabeth Lesuer were an unlikely couple. She was a devout Catholic, he a committed atheist. They were married at the turn of the century in France, and spent 25 years deeply in love despite their differences. Élisabeth prayed daily for her husband’s conversion, and while she didn’t live to see it, it was her words and actions that brought her husband back to the faith, eventually becoming a Dominican priest and leading the cause for her canonization.

In “Salt and Light: The Spiritual Journey of Élisabeth and Félix Leseur” (Ignatius Press, $17.95), Bernadette Chovelon dives into their marriage and the strength of their love.

Just in time for Valentine’s Day, Kris McGregor discusses Chovelon’s book with Mary Dudro, who translated the book from French to English.

Kris McGregor: What’s the background of Élisabeth and Félix Lesuer? Why are they so relevant today?

Mary Dudro: When Élisabeth and Félix meet, it’s the 1880s, which is the beginning of what’s known as “La Belle Époque” (“The Beautiful Era”) in Paris. It’s a whirlwind of excitement in the world of art and politics and technology. There’s a lot of exciting change going on, but there’s still this old European ethos very much still alive. The sense of old world romance adds a lot of charm to their story — they go to balls but also to the 1900 Paris Exposition.

They meet in their early 20s, introduced by a mutual friend, and they really hit it off. They have so much in common, and come from very similar family backgrounds, and they just clicked. When they got married, their early life was very exciting — lots of travel; they were part of a very intellectual and political social circle in Paris. And that’s all something they have to figure out how to balance with their marriage, their responsibilities, and for Élisabeth, her spiritual life. It’s a wonderful story of how they navigate marriage and all the trials that come with it.

McGregor: Bernadette Chovelon, the author of this book, is a French doctor of letters and philosophy, who specializes in the psychology and spirituality of marriage. What makes the Lesuers’ marriage so incredible?

Dudro: Their marriage raises the bar on the understanding of sacramental marriage, and what that’s supposed to accomplish over time for each person in the marriage. There’s a really strong testament to the goal of working for each other’s souls, and that your marriage is going to be the saving grace for both of you. That’s not something I think we reflect on often enough. 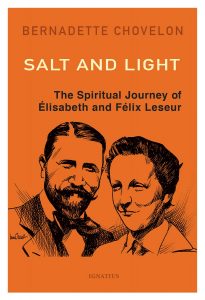 Something Chovelon highlighted in her book is the enduring love Élisabeth and Félix had for each other, but also just their friendship. They had a strong meeting of the minds, and they shared a lot of interests, and confided in each other — they really were each other’s best friend.

The example of Élisabeth and Félix is supposed to encourage us all that, where there is love, there is God and there is grace. Even though they had this deep struggle over religion, because they really loved each other and never stopped serving each other, and being considerate, and making sacrifices, their relationship stood fast.

McGregor: This story was lived out over a century ago, but their experience touches the lives of so many today. There are so many people who may be in marriages that look nothing like the typical, sacramental marriage, when they start out. Maybe one spouse is despairing because of that, wishing to share the faith with the spouse. This story says, “Don’t give up hope. Don’t give up praying. Don’t stop loving, because there’s a fruitfulness that we may not be able to anticipate in this present moment, but maybe God is doing something greater.”

Dudro: That was very much Élisabeth’s approach to her prayer life — she had complete trust in the Lord, that he had a plan, he was in control. He was going to hear her prayers for Félix’s conversion. He was going to make their marriage fruitful.

She really believed that it was her sacred duty to pray and offer sacrifices for Félix’s conversion, but she also understood that his conversion would not be of her doing, but of God’s. She was detached from a sense of time, or a sense that this has to happen in a certain way. She trusted God, that in his time, Félix would come back to the Church.

McGregor: Félix was very engaged in the world at the time.

Dudro: Definitely. He started out as a medical student, so he was involved in the cutting edge of what was happening in science. Then he transitioned to political journalism, and became very interested in France’s colonial ambitions. He was very optimistic about the future, I would say.

That’s something we can see with our own obsession with progress today. This progress is going to happen, and humanity is going to be better for it. And religion has no place here, because human improvement has nothing to do with spiritual reality.

The world as Félix saw it was completely material and scientific. I think he would have shared that sort of ambition, that humanity can progress from a technological standpoint.

Félix and Élisabeth traveled extensively across Europe. They experienced a lot of these technological benefits. It’s interesting that he’s matched with someone who enjoys and appreciates all of these advancements, but Élisabeth also has the perspective that change in itself isn’t good if the human heart is not also changed.

McGregor: It’s clear in the book how much Félix loves Élisabeth. He cares about her. And her enthusiasm and love for him is very real. But they have real, unanticipated suffering in their marriage, with her illness.

Dudro: Élisabeth had liver disease. She would have bouts of sickness where she would be bedridden for weeks. And possibly connected with that, around the same time, she learned that she wouldn’t be able to have children.

Élisabeth resigns herself to her suffering on a spiritual level, and Félix takes such beautiful care of her throughout their entire marriage. He gives up his dream job so that they can live close to family. He really puts her first.

McGregor: Félix is a great example of not being quick to judge. As Élisabeth demonstrates, there’s such great hope and trust that God will do the work. She talks of the “duty of silence.”

Dudro: Élisabeth takes that approach with everyone who is not a believer, which was many of their friends. She has this understanding that conversion is at the heart, and so she doesn’t try to evangelize the people in her life with a verbal, argumentative approach. She believes that just loving them for who they are, and praying for them in secret, is the best way to let God work on their hearts through her.

She’s so detached from the need to convert this person. She fully trusts that it’s God who will touch their hearts in his own time, and that she is just here to love them, and to be a witness to God’s love.

When Félix read his wife’s diary after her death, and her other writings, and learned of all the sacrifices she had made for him so discreetly, and the tremendous faith that she had had in his goodness, he’s so humbled by that. And shocked, in a way, by how much suffering she offered up for him.

That example of love, in addition to her affection for him, and the home she made for him — to learn about her interior life and her interior love for him, it just bowled him over.

McGregor: It’s like the mystery of divine mercy. You have to continue to believe in that mercy, even after death. You have to trust in the mercy of God and his grace, and to see what he’s doing. In a very real way, Élisabeth did that.

Dudro: She trusted that God has the full picture, while we have only little slivers of it.

McGregor: The footnote to this love story is that, after Élisabeth’s death, Félix became a Dominican priest, and the promoter of her cause for sainthood. And now, Élisabeth is a Servant of God. How about that?

Dudro: Félix had a very full life as a priest. He was able to take what he learned from Élisabeth and reciprocate it through his ministry, which is a beautiful reminder that nothing is wasted. Even though he couldn’t share the faith with Élisabeth, he was able to share the faith they shared, after her death, with all of these other people.

They’re so normal. That was something that really touched me, because I saw the normalcy of their life, and the ordinary nature of their marriage. They were just regular people who took their love and saw it in this bigger picture. I hope they will inspire others, to see that all of us are called to this holiness, with who we are in our own personal lives.

Pope approves updates to norms for dealing with 'grave crimes'