Philippine Catholic bishops congratulated the country’s first-ever Olympic gold medalist, weightlifter Hidilyn Diaz, not only for her victory but for her show of faith and devotion to the Blessed Virgin Mary. 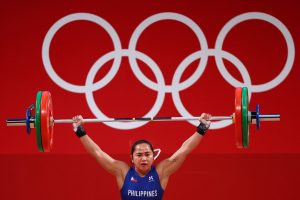 Diaz's triumph came in the women’s 55-kilogram weightlifting event on July 26. She also set an Olympic record after lifting a combined weight of 224 kilograms.

After completing her final lift in a very close competition, Diaz held her hands to her face, burst into tears and clutched at her Miraculous Medal of the Blessed Virgin Mary hanging from her neck.

Hidilyn Diaz got two medals, the Olympic gold and the Miraculous Medal of Our Lady.
Congratulations and thank you for bringing honor to our country!#HidilynDiaz pic.twitter.com/rXwOiW0ZjK

“Thank you, Lord, thank you Lord,” she cried repeatedly after the winning lift.

Later on the podium at the medals ceremony, Diaz pointed heavenward after singing the Philippine national anthem, then made the Sign of the Cross before stepping down and shouting “Mabuhay ang Pilipinas!” (“Long live the Philippines!”)

Diaz’s inspirational victory and public display of her Catholic faith touched the hearts of church leaders and Filipino Catholics watching from home and quickly went viral on social media.

“We admire her devotion to the Blessed Mother as she carried in her victory her great faith in God,” said Archbishop Romulo Valles, president of the country’s bishops’ conference. “Hidilyn is a true weightlifter who draws her strength from her love for the country and her deep Catholic faith.”

Cardinal Jose Advincula of Manila said Diaz has given inspiration to all Filipinos.

“Thank you, Hidilyn, for the tremendous honor you have bestowed on our country,” he said via Church-run Radio Veritas.

“Your success gives light, inspiration, and hope to all of us, especially in these difficult times,” he continued. “Thank you for the testimony of your strong faith in God and deep love for the Blessed Virgin Mary. Thank you for reminding us that there is no real success if it does not come from God.”

In a media interview on July 27, Diaz said her Miraculous Medal was given to her by friends before she departed for Tokyo earlier this month.

“They prayed a novena for nine days before my competition," she told reporters, adding that she prayed a novena herself and is grateful for all the support her “prayer warriors” have given her.

A novena is a popular Catholic spiritual devotion consisting of the recitation of a set form of prayer for nine consecutive days, in petition for a divine favor or in preparation for a liturgical feast or as participation in an important event such as a Year of Jubilee.

Diaz said the religious medal is “a sign of our prayers and faith in Mama Mary and Jesus Christ,” adding that her faith in God is the major reason for her success.

Diaz is the fifth of six children of a poor trike driver in a small village in the southern Philippine city of Zamboanga.

In previous media interviews, the future Olympic gold medalist said that when she was a child she wanted to be a banker so that her mother would stop complaining about the lack of money.

A cousin, however, introduced the then-10-year old girl to weightlifting by training her with makeshift barbells made from plastic pipes with cast concrete weights at either end.

Bishop Ruperto Santos of the Episcopal Commission on Migrants and Itinerant People of the bishops’ conference said Diaz’s victory showed that Filipinos can rise up to any challenge with God's help.

“[S]he has shown to us that the Filipino can. We can rise up from all challenges in life. We can surmount all obstacles," said the bishop.