Resolutions are always an important moment for fictional characters. But in the movies, change doesn’t happen at New Year’s. It happens at Christmas. From big-city corporate women who return to their hometown and fall for a plaid-clad B-lister, to George Bailey realizing that by golly, it really is a wonderful life, scads of holiday protagonists resolve upon change at Christmas instead of the comparatively boring and arbitrary New Year’s Day.

Maybe it’s just that filmmakers know Christmas is a more visually interesting holiday. And it is. But ultimately, I think we all intuit that true resolutions must be inspired by something more substantial than dates on a calendar.

Nothing illustrates this better than the story of Ebenezer Scrooge, the star of Charles Dickens’ “A Christmas Carol.” My favorite version understands this clearly. An atmospheric and emotionally rich take on the tale, the 1984 George C. Scott TV film illustrates that true change can only come if we, as the original hymn and theme song advises, “Rejoice for Mary's son.”

Scrooge is the Hamlet of Christmas cinema, a universal character drawn in strokes just broad enough to allow for a wide variety of interpretations. Everyone has a favorite. There’s Seymour Hicks’ brusque and mannered Scrooge. Michael Caine’s sardonic and nasty Scrooge. Alistair Sims, who’s deeply sad at heart. 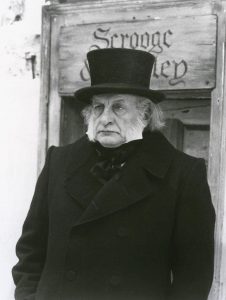 But here’s the thing about Scott’s Scrooge: he thinks he knows what’s going on. He’s a man with a cast-iron worldview which doesn’t allow for things like ghosts, generosity, or community. When the spirits show up, he thinks he can second-guess them and fast-forward to the moral of the story. He takes in their moral advice like helpful platitudes. But clearly his heart has remained untouched. Without a full confession of his own depravity and mortality, he cannot understand why it is so important for him to change his ways.

Scott humanizes Scrooge wonderfully. With the grim man-of-the-world air which he brought to roles like General George Patton, the bulldog actor dismisses jollity and frivolity as so much time-wasting. He reacts with defensive sarcasm to the spirits’ moral needling. In a nice bit of script-editing, the film removes some lines from the original story, which handed us the morals of each episode too neatly. In the book, Scrooge wishes after each revelation that he had done something differently in his life.

Not so Scott’s Scrooge. He’s savvy enough to think he’s figured out what the spirits are doing, and condescendingly absorbs each lesson as if he’s learned the whole already. It’s only near the end of the story that he starts to realize his entire way of living has been undermined. When he finally does understand and admit the truth, the only reaction can be utter penitence.

And notably, it is the mercy that produces Scrooge’s delight, not nostalgia or sentimentality. He awakes rejoicing not because he’s already changed his behavior, but because he has been given the chance to do so when he least deserved it. Scott’s stubborn persona makes his final breakdown all the more affective, as the grizzled old general breaks into sobs over his own frigid grave.

Scott’s adaptation has this great strength: that it understands this is the story of a man repenting on the brink of hell. The rattling chains and wailing ghosts are at his door, yet he is too caught up in the material world to recognize his own spiritual poverty until it is nearly too late.

For modern audiences, the religious significance of Christmas could seem incidental to the story, with our materialist eyes more aware of Scrooge’s newly awakened social conscience. But Scrooge’s journey is one saturated with religious imagery, complimented and not belied by the tale’s science fiction and horror trappings.

While this is not a Christian allegory, Dickens intuits that a true change of heart must spring not just from a recognition of economic realities but of spiritual ones, too. His ghosts share far more in common with Gabriel and Michael than Casper or Freddy Krueger.

After the first ghost reveals to Scrooge the regrets of his youth, the old man wrestles with the Spirit, ineffectually attempting to smother its light with a metal cap — a man trying to extinguish a lamp under a basket. Later, he verbally spars with the Spirit of Christmas Present, pharisaically endeavoring to trap the jovial ghost by criticizing Sabbatarian practices.

Scrooge wishes to stamp out the truth that is being revealed to him, and when at last he cannot, he can do nothing but throw himself at the mercy of a higher power, grasping at the final ghost like Jacob fighting the angel of God. The result? A joyful deliverance and boundless love, spurring him on to love of neighbor. God bless us every one, indeed.

It is this religious meaning, implicit but powerful, that makes “A Christmas Carol” such a powerfully universal story. And I think that, after all, is the reason why Christmas always wins out over New Year’s. After all, what is New Year’s but an arbitrary day in the winter? We throw a party and make resolutions that we all know we’ll break in a few weeks.

But Christmas gets at something which a New Year’s resolution doesn’t. It gets at the motivation for change — it’s more than simple willpower; it has to come from a deep recognition of our own helplessness before God.

This is the true insight that Christmas offers. In the darkness of winter, a child is born who represents the great unmerited mercy of God — an event that can change our hearts much more than any self-created resolutions. “A Christmas Carol” offers a road map for change far more effectively than any New Year’s Eve film could.

Ebenezer Scrooge comes face-to-face with his own wretchedness, his missed opportunities, his warped worldview, his blindness to the suffering of others, but he grasps for redemption before it’s too late. The joy he finds at the end of this repentance carries him forward into a glorious new year.

May that be truly said of us, all of us!