Why ‘Marriage Story’ is our story

Netflix describes its new film “Marriage Story” as a “compassionate look at a marriage coming apart and a family staying together,” but that is a rather optimistic assessment. It does not have a happy ending.

It is also one of the best movies on marriage ever made.

A delicate tragedy that looks with immoderate compassion and unconventional sincerity at the limits of human love, director Noah Baumbach serves us up with a truth that is hard to look at, but whose contemplation might, in the end, leave the door open for hope (spoilers ahead).

In a delicate ruse, the movie begins with each character reading a list of things they love about their partner.

I’d consider myself most fortunate if my wife wrote only a half of what Nicole (Scarlett Johansson) has to say about her husband. Charlie (Adam Driver) cleans up, sews, keeps the house in order, takes all his wife’s moods steadily and never makes her feel bad about them, and even loves to wake up in the dead of night to tend to their child.

He is a great father and a self-made man who made it as a director in an experimental theater company in New York, coming from a childhood of alcohol and parental abuse.

Nicole is nothing less. From a family of actors in Los Angeles, she has left a career in the film industry to follow Charlie to New York, where she stars in his experimental plays. In Charlie’s words, she is a great mother who loves to play with her child, makes the best presents, and knows when to push him and when to leave him alone.

Soon we discover, however, that these letters have been written at the behest of a divorce mediator. The couple is coming apart, and when the two come together in the counselor’s office, Nicole refuses to read her letter and storms outside.

The initial letters make sure we realize these two are no average couple, and that they are made for each other. Their marriage isn’t falling to pieces because they married the wrong person. Quite the opposite: Being made for being together, they are unable to.

The point is reinforced by the movie’s final scene. After a destructive legal battle, Charlie and Nicole come to an agreement about child custody. Nicole has started a successful TV career and lives with a new partner in LA.

Happy ending? Hardly. When Charlie comes to visit his son, he chances upon Nicole’s letter. As he reads it, he melts into tears (trust me, watching Adam Driver crying is, by itself, worth a Netflix subscription), not noticing that Nicole, also profoundly distraught, is watching him.

We are told that before meeting Charlie, she was dating a not-so-special guy from LA. Then she met Charlie and everything in her life became possible. But at the end of the movie, she is back to dating an ordinary man, and Charlie is alone.

“But alone is alone, not alive!” is what Charlie sings in a bar at night in front of his theater crew, a touching performance by Driver of a song from the 1970 musical “Company.” Sure, life goes on, but both characters have left behind the love of their life.

So, what’s driving them apart? The truth comes to light most painfully in a devastating argument toward the end of the film. Yes, Charlie cheated on Nicole, we learn, but that was only after he was sleeping on the couch.

More damaging was his selfishness: It seemed impossible for Charlie to realize that his whole life plan did not automatically take into account his wife’s happiness as well.

The divorce enables Nicole to finally make her voice be heard and begin a new life, no longer in her husband’s shadow.

Yet, one feels that deep down Nicole may only want to get her husband to realize how much he has hurt her, to go back to exist for him, not away from him.

The movie shows both characters fighting, and losing, against their own limitations. Charlie’s love is limited by his selfishness, which he is clearly unable to overcome. Nicole is unable to forgive, and quite simply can’t take the pain of living as a prop in the great show of Charlie’s life.

Both are unable to let the other take a piece of their happiness, a piece of their life. Part of the quiet beauty of “Marriage Story” is that it looks at both partners, and indeed, at all couples, without a hint of judgment: We are all limited, and wounded. None of us can let themselves be trampled upon. Our love can only go so far. 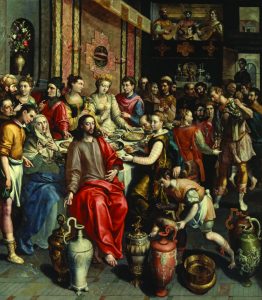 "The Marriage at Cana," by Maerten de Vos, circa 1596. (Wikimedia Commons)

In the Gospel narrative of the wedding of Cana, Mary notices that the wine is running out. She pleads with Jesus to help the newlyweds, but he first reproaches her for forcing him to anticipate his revelation, but eventually obliges. The master of ceremony is puzzled.

“Everyone serves the good wine at the beginning, and keeps the bad one for the end, when everybody is drunk. But you have kept the good wine till the end,” he exclaims.

Wine is a crucial symbol in the Bible, representing both joy and love. Before dying on the cross, Jesus is forced to drink vinegar, the sour wine of humanity’s selfishness, yet his sacrifice grants access to the wine (the joy) of the Promised Land.

In every marriage, no matter how perfect for one another the partners, the good wine will run out. Why? “Marriage Story” offers a profound answer.

As the German poet Rainer Maria Rilke put it, “This is the paradox of love between man and woman: two infinites meet two limitations, two infinite needs to be loved meet two fragile and limited capacities to love.”

But this terrifying truth does not come without hope. A compassionate look at human failure is the precondition for grace, for those who know that water can be changed into wine. It is Mary’s compassionate look at the newlyweds of Cana. It is this look that encourages us to beg for new wine, in marriage as in life.