Where are the Father Peytons, Father Kiesers and Bishop Sheens of today?

There were three men of the cloth who didn't know the meaning of the word "quit," at least when it came to media.

First, there was Archbishop Fulton Sheen, whose planned beatification last December was postponed by the Vatican. He had a weekly radio show for 20 years when the only kind of radio was AM radio, and there were far fewer stations then than today. Archbishop Sheen then moved his show to television.

"Life Is Worth Living," his weekly program, drew 10 million viewers a week against the likes of entertainment heavyweights Milton Berle and Frank Sinatra -- winning the prelate an Emmy -- and topped out some weeks at 30 million viewers.

"Life Is Worth Living" even survived its network! When Dumont pulled the plug in 1955, the show was picked up by ABC, where it ran two more seasons. After a four-year hiatus, Archbishop Sheen took to the airwaves again with a syndicated program that aired for seven seasons. And, in keeping up with the latest in the technology of the times, he established a cassette-tape ministry in the 1970s. 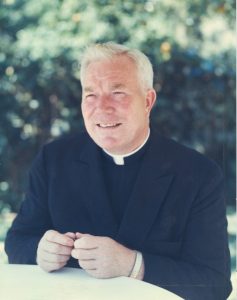 Father Patrick Peyton, a Holy Cross priest, who popularized the adage "The family that prays together stays together," is seen during the 1960s. (CNS photo/Family Theater Productions)

Then there's the case of Father Patrick Peyton, the "rosary priest" who helped make famous the phrase "the family that prays together stays together."

Not to be forgotten is Father Ellwood "Bud" Kieser, who founded Paulist Productions in 1960. Father Kieser introduced all 250 episodes of Paulist's syndicated TV drama anthology "Insight," which ran from 1960 to 1988. It was the longest-running weekly syndicated show on TV until overtaken by "Soul Train." Paulist Productions also produced the movies "Romero" and "Entertaining Angels: The Dorothy Day Story."

Paulist Productions continues today, with 500 hours of content under its belt. So too does Family Theater Productions, which has 1.2 million followers on social media.

But where are the Catholics today -- clergy, religious or lay -- to make the kind of impact these three had in the secular media environment?

For one thing, media production is expensive. In the heyday of the three priests above, TV and radio production worked under the same constraints. TV dramas were recorded on sound stages; location filming was costly. And color TV? A nice idea, but few people had color TV sets to justify the expense of making a show in color.

I can remember as a high school freshman watching "Insight" episodes in religion class on Fridays in the early 1970s. The moral of the stories may have been profound, but it lost on style points as network shows by then were in color, and consumers had stepped up to buy color TVs.

Another point: The TV industry stopped counting the number of eyeballs watching their shows and started on focusing on which eyeballs were watching their shows. That's called demographics. And if you can't keep people watching your network once a religion-based show ends and something else begins -- or the opposite -- then some show's going to get the pink slip.

A prime example of this is when CBS canceled "The Beverly Hillbillies," "Green Acres" and "Petticoat Junction" because its audiences were too rural for the Tiffany Network's taste, even though they were among the highest-rated shows on TV. There was a severe backlash and it took CBS several years to recover.

A third point is that there's little appetite among programming executives to touch anything that has a religious or spiritual patina. The elimination of virtually all community-service obligations for local TV stations to keep their licenses gives local executives cover as well. Nor are there as many celebrity types willing to wear their religious faith on their sleeve.

Moreover, the media landscape is fractured, almost beyond recognition. Were someone like Archbishop Sheen to come along and pull in 10 million viewers week after week by just chatting in a stuffy library-looking room for 30 minutes, TV executives would be falling over each other trying to sign him. 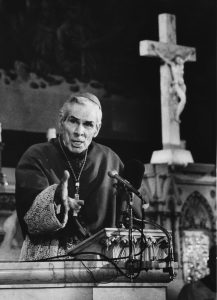 But in Archbishop Sheen's day, there were four -- then three -- commercial broadcast networks. Now there a five, and that's just in English. Throw in cable, satellite and streaming, and you've got a bouillabaisse of options. On radio, there are few scripted shows, but plenty of options on AM and FM -- which didn't exist in Archbishop Sheen's heyday -- plus satellite radio with its 200-plus channels.

There's also this thing called the internet, which has -- use your Carl Sagan voice here -- billions and billions of pages. As a result, while there's no shortage of Catholic voices, they're all fish swimming in smaller and smaller ponds, yet, ironically, being drowned out under a tidal wave of stronger cultural and societal forces.