What a generation of Catholic thinkers owes Peter Kreeft

“Wisdom and Wonder: How Peter Kreeft Shaped the Next Generation of Catholics” (Ignatius Press, $17.95), draws attention to the decades of teaching and writing by a beloved Boston College professor. As someone who has known Kreeft since my college days, I found that his influence in my own life echoes the stories collected in Vogt’s book.

I remember my very first day in professor Kreeft’s classroom.  I had been warned by another professor not to take Kreeft’s class, so naturally that made me curious to know why this Kreeft would merit this warning. I was a sophomore in every sense of the term, and the class was called “Thinking About Religion.”  Kreeft walked in the classroom with a huge briefcase that resembled a large brown cube. He set it down and picked up a piece of chalk. He wrote on the board, “Either God exists or God does not exist.” He paused. He looked at us. We looked at him. He let those words sink in.

I remember thinking: “Yes, that seems right. Either there really is a God, or there is not. Maybe I can never know whether there is, or maybe I can know, but in fact, in reality, either God really exists or God does not really exist.” 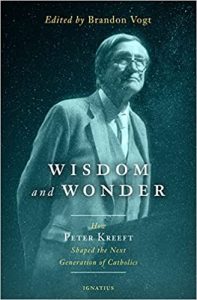 Walking back to my dorm room, I thought better of these first thoughts and wrote a paper attempting to refute what Kreeft had taught on the first day. In this paper, I argued against what I called “binary reasoning.” The next class I turned in the paper to Kreeft, wondering how he might reply to what I considered to be a devastating refutation.

The following class, like a serve in tennis, he returned the paper. It was filled from stem to stern with comments. He indicated material fallacies I had made, corrected misspelled Latin words, and showed that I had not understood, let alone refuted, what he had taught. I looked over these comments, more than any teacher had written on any of my college or high school papers.

The more I read his comments, the more I became convinced. I was indeed wrong, and Kreeft was indeed right. I thought to myself, “I’d better start to think more clearly.” I thought Kreeft was just the person to help me. He was indeed a dangerous professor, the kind that can turn a student’s life in an entirely new direction.

The entire semester with him in the classroom was for me like bright sun burning through the dense religious fog I’d been wandering around in for many years. I was already a believer, but muddle-minded and unclear what I believed or why I believed. Kreeft changed all that in part by introducing me to C.S. Lewis’ “Mere Christianity,” “The Problem of Pain,” and “The Great Divorce.”  I also began to read many of Kreeft’s own books including “Heaven: The Heart’s Deepest Longing,” “Between Heaven and Hell,” and “Making Sense Out of Suffering.”

“Wisdom and Wonder” captures the stories of 18 other millennial men and women who became Kreeft’s students, including Trent Horn, Douglas Beaumont, Ph.D., and Father Blake Britton. Among them is Brandon Vogt, whose journey to Catholicism was profoundly influenced by Kreeft. Vogt devoured books by the Boston College professor, most importantly perhaps his co-authored book “Handbook of Catholic Apologetics: Reasoned Answers to Questions of Faith.”

My own debt to Kreeft includes a glowing letter of recommendation for me for graduate school, and he gave me a copy. Insecure graduate students need their confidence built up at times.

Years later, he wrote a preface for my book “Thomas Aquinas on Faith, Hope, and Love” in which I stole the basic idea he had already carried out in his book “Summa of the Summa” of having St. Thomas Aquinas’ text above and then explanatory footnotes below explaining the text.

Kreeft has taught generations of students since 1965, both in the classrooms of Boston College and outside of it, a countless cloud of witnesses. This new book expresses the power of a teacher — one dangerous teacher.