A print book which includes Pope Francis’ homilies during the coronavirus lockdown in Italy has been published by the Vatican.

“Strong in the Face of Tribulation: The Church in Communion – A Sure Support in Time of Trial,” collects Pope Francis’ homilies, prayers, and other messages delivered from March 9 to May 18, 2020.

The paperback book is available for purchase on Amazon.com for $22.90.

It also includes resources for times when physical access to the sacraments is not possible and other Church blessings and prayers.

A free PDF of the book was available on the website of the Vatican Publishing House in various languages, but according to Vatican News, there were requests for a print version. 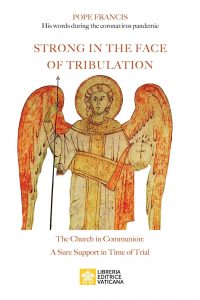 Fr. Giulio Cesareo, editorial director of the Vatican Publishing House, told Vatican News Pope Francis “is a father, a spiritual guide who accompanied us as we lived that period [of lockdown].”

“His homilies are precious because they are not only valid for back then. We still experience conflicts, shame, difficulties in praying. We were perhaps more receptive and attentive to what he told us back then,” he said. “But it is important to keep his words with us so as to allow ourselves to be continually nourished by the beautiful things he said that concern life.”

During Italy’s 10-week lockdown, a measure taken to curtail the COVID-19 pandemic, Pope Francis livestreamed his daily morning Mass in the Vatican guesthouse where he lives, the Casa Santa Marta.

The pope would open every Mass by offering a prayer intention related to the health crisis.

Afterwards, he would lead those following the Mass from home in making an act of spiritual communion, and hold around 10 minutes of silent adoration of the Eucharist.

Millions of people around the world tuned in March 27 to a live televised prayer service Pope Francis held in an empty St. Peter’s Square to pray for the world during the coronavirus pandemic.

The holy hour which concluded with an extraordinary Urbi et Orbi blessing had a reading from the Gospel and a meditation by Francis, who spoke about faith and trust in God during a time when people fear for their lives, as did the disciples when their boat was caught in a violent storm.

The pope’s meditation and prayers from the holy hour and blessing are among those included in “Strong in the Face of Tribulation.”

The global coronavirus outbreak has spread to nearly every country in the world, with over 15 million documented cases and more than 624,000 deaths, according to the John Hopkins University COVID-19 resource center.