The quiet prayer life behind St. Joan of Arc’s bravery

As far as lives of saints go, the one belonging to St. Joan of Arc tends to resemble a Hollywood script more than a contemplative journey. She was, after all, a peasant who won the trust of the highest levels of power, a teenager who led men twice her age into battle.

In the words of Pope Emeritus Benedict XVI, the French saint, whose feast the Church celebrates May 30, was “representative of those ‘strong women’ who fearlessly bore the great light of the Gospel in the complex events of history.”

“The liberation of her people was a work of human justice which Joan carried out in charity, for love of Jesus,” he said at a 2011 papal audience. “Her holiness is a beautiful example for lay people engaged in politics, especially in the most difficult situations. Faith is the light that guides every decision.”

It is that holiness — and the deep interior life which made it possible — that is the subject of Sven Stolpe’s “The Maid of Orleans: The Life and Mysticism of Joan of Arc,” (Ignatius Press, $18), which envisions St. Joan as a mystic, rather than simply a religious war hero.

Vincent Ryan, Ph.D., assistant professor of history at Aquinas College in Nashville, who wrote the book’s foreword, shared his thoughts on the spiritual side of St. Joan that too often gets overlooked.

Vincent Ryan, Ph.D.: When you focus on St. Joan’s mystical spirituality and the mystical nature of how she endured suffering, it is like blinders are lifted from your eyes. You’re seeing something you’ve looked at all this time in a new perspective.

McGregor: When Stolpe talks about her prayer life, and especially the flowering of her mysticism, he’s very tender.

Ryan: Stolpe writes, “Joan’s real greatness is her willingness to die as shameful a death as the savior upon the cross. As a sacrifice for all the cowardly, the cold-hearted, and the arrogant, God must call upon the purest and bravest of souls to suffer innocently and to die.” 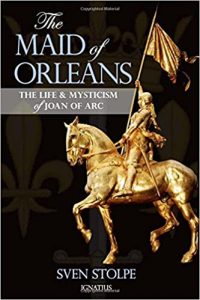 Her imprisonment and her trial particularly get at her prayer life. It’s a theme throughout the book, but in her isolation and persecution, you really see Stolpe try to penetrate as much as he can into the spiritual side of St. Joan.

That was her bedrock, how she embraced her suffering.

McGregor: Her prayer life kept her rock steady. There’s a moment in the book where she is being approached by townspeople, and she’s becoming well known as the army campaigns. Even though the campaigns haven’t always been successful, people want to be around her. She’s warned in prayer, and I’m paraphrasing, “Be careful, don't fall in love with the sound of your own voice.”

Ryan: People gravitate to her, they’re drawn by her humble confidence. It might seem like a contradiction, but they are also attracted by her confidence in her mission, in the rightness of the cause, and that she’s doing God’s will. There’s no sense of haughtiness in her, just this humble confidence and determination.

That, I think, makes her all the more attractive to those around her, and it inspires them, either on the battlefield or to stand strong once more against the English.

McGregor: Talk to us about this time in France.

Ryan: France is in a pretty desperate situation. The Hundred Years’ War had overrun many parts of the country. Most of the war was raids by mercenary groups and free companies that would trade sides between the English and the French, and they would ravage towns and villages and countrysides. It was a brutal war that greatly devastated France, and that very much impacted the average person and many of these villagers, like the village of Domrémy, where St. Joan grew up.

It tells you how desperate the situation is, when you think about it, that this 17-year-old girl who’s illiterate, she’s a peasant, she’s not from an elite background, comes onto the scene and is able to present herself to the court as someone who God wants to help lead the French into battle, to regain their lands and have the Dauphin crowned.

There was some skepticism about this. After her visit to the Dauphin’s court at Chinon, St. Joan undergoes a three-week interview, where theologians and others are having discussions with her to try and get a handle on her spiritual claims, and see if they’re orthodox. And she passes that.

And they’re willing to let a peasant teenage girl lead the army into battle. She’s not really making military decisions, but she’s still there as kind of a standard-bearer — motivating and inspiring the men in that way is pretty remarkable.

What sticks out is that St. Joan is not overwhelmed by her great success. Her prayer life keeps her grounded. 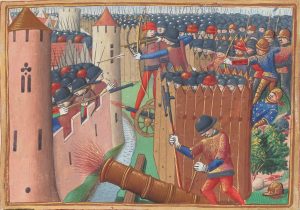 A late 15th-century depiction of the siege of Orléans of 1429, from Les Vigiles de Charles VII by Martial d'Auvergne. (Wikipedia)

McGregor: She was a contemplative. She needed that time of solitude, just like other women considered “typical mystics”: St. Catherine of Siena, St. Teresa of Ávila, and so many others. They did extraordinary things fueled by their lives of prayer.

Ryan: Joan was an atypical commander. She was keen on emphasizing the importance of confession to the men she led, reminding them to go before battle. You don’t see a lot of commanders past and present emphasizing the sacramental life of the Church as a necessary component.

You read that a lot of the men had not gone to confession in a long time, and were initially cynical about this, but they came to realize, even though some might have been skeptical or unsure about who this girl was and what she was about, the genuine nature of Joan’s piety, and her very straightforward, humble aura of confidence, of love of Christ and country.

McGregor: Joan was captured outside of Compiègne by the Burgundians. She was taken to Rouen and tried by the English and a pro-English French bishop as a heretic. Certain theologians from the University of Paris relentlessly twist her visions and experiences in prayer. Even Charles, who she enabled to be crowned at Reims, doesn’t even attempt to ransom her.

Joan is essentially abandoned by everyone who could have saved her. She is convicted as a heretic. They burn her at the stake while she cries out over and over again the holy name of Jesus.

Her tribunal judges have her burned a second time to literally crush her body to ashes so they can be tossed into the Seine River. They wanted no relics of her to remain for the faithful of France to venerate. She was only 19 years old.

And then there was her Trial of Rehabilitation.

Ryan: I think a lot of people don’t realize that happened. Around 1450, the French forces were able to retake the city of Rouen, where St. Joan’s heresy trial was, and where she was burned at the stake. This provides Charles the opportunity to right his wrongs, if you will, to give St. Joan the fair hearing she never received.

There’s a political component to it. St. Joan was an important component of the Valois Dynasty’s reputation. A really good book on the retrial is by the great French medievalist Régine Pernoud, “The Retrial Of Joan Of Arc: The Evidence for Her Vindication.” Pernoud writes that this was not a kangaroo court. It’s quite the opposite of the dubious legal proceedings that St. Joan endured at Rouen.

The retrial provides legitimate ecclesiastical proceedings to happen, authorized by the Church, to reveal the true nature of St. Joan.

It’s about St. Joan the believer. What did she believe? Was she a heretic? Clearly, the verdict was: No. So the goal was to undo the unjust determination of the trial that led to her execution almost 30 years before. It was critical to pave the way toward her later canonization in the early 20th century.

St. Joan of Arc is very accessible as a saint. The combination of her patriotism and her spirituality — all her acts were ultimately rooted in her love of Christ.