The prayers that God can’t say no to

Wouldn’t it be great to know that God will always answer your prayers? Well, there are some prayers that we’ll always get a yes to, according to Anthony DeStefano, author of “Ten Prayers God Always Says Yes To: Divine Answers to Life’s Most Difficult Problems” (Doubleday Religion, $7). He says that if we’re asking God the right questions, we’ll always know that he hears us and wants to help us.

Kris McGregor: How were you able to pick out 10 prayers?
Anthony DeStefano: There are more than 10 prayers that God always says yes to, but 10 is a nice round number. All I’ve done is taken promises that God has already made to us, or commands he’s given to us in the Old and New Testaments, and I’ve put them in the form of prayers.

You know God never makes us a promise unless he delivers on it, and he never commands us to do anything unless he gives us the power to follow through on that command.

McGregor: You say that asking God, “Show me that you exist,” will always get an answer.
DeStefano: People get confused, because God is invisible. They think he’s just going to play hide-and-seek for the rest of our lives, as if God is some cosmic joke player.

He wants us to have faith in something that’s invisible, that’s part of the test we have to go through. But he wants all of us to come to know him and communicate with him.

When we say to God, “I’m having a lot of problems believing in you, because of all the suffering in the world. Please give me some sign that you’re out there,” he’s going to show us that he’s there. He wants all people to be saved.

McGregor: What prayer does God answer fastest?
DeStefano: If you say to God, “Make me an instrument to help other people,” somebody’s going to show up on your doorstep, practically before the day is out. Something is going to happen. It’s fast-acting because so many spiritual laws feed into it.

It’s the law of love: sacrificing yourself for other people, giving of yourself to others. When you tell God explicitly that you want to do that, he wants you to do that anyway, so he’s going to say yes right away.

Jesus Christ, in the Garden of Gethsemane, asked God to “let this cup pass from me.” He had faith. He was God himself. And yet the prayer was denied. He had to be crucified. That was the Father’s will.

McGregor: How can you do that when you’re suffering, and you don’t think you can take it anymore?
DeStefano: The prayer that God always answers is, “Get me through this suffering.” God may not remove the suffering itself. Sometimes he does; there are miracles that happen every day. But they’re miracles because they’re exceptions to the rule.

McGregor: What does God do with a prayer of forgiveness?
DeStefano: People often can’t bring themselves to believe that God will forgive them. Or they have the opposite problem: They don’t think they have to be forgiven.

But if you’re sorry, and you try to turn over a new leaf, God will forgive you. Period. We can’t bring ourselves to believe that, and some of us go through life with the guilt and the weight of all these past sins, and it warps people. If they just believed that God will say, “I forgive you,” if you’re sorry — that’s all you have to do.

It’s very easy. That’s why Christ said, “My yoke is easy; my burden is light.” Why? Because Christianity is easy to follow the rules? No. It’s easy because if you break the rules, God calls a do-over every single time. He says, “You are forgiven,” every single time.

McGregor: What about the prayer for courage?
DeStefano: In some ways it’s the most important of the prayers in the book. God doesn’t just say, “Try to be brave.” He says, “Be not afraid.” That’s a command. If we ask for courage, God will give it to us.

It’s the guts not to give into temptation. 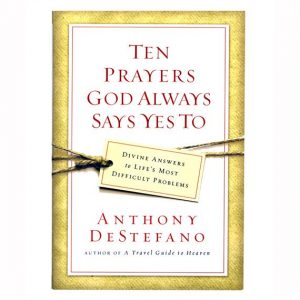