The hits and misses of the Super Bowl’s secular sermons

Hours before Tom Brady won the Super Bowl and raised the Vince Lombardi Trophy for the seventh time in his career, CBS urged its audience to “tune in for a special moment before kickoff.” The network teased the segment relentlessly, and most football fans knew it would involve the trophy’s namesake, the legendary coach who won championships with the Green Bay Packers in the 1960s.

When the “special moment” finally arrived, between a tribute to COVID-19 victims and a performance of “America the Beautiful,” viewers entered the uncanny valley, that strange place where the world’s best animation technologies try to render people lifelike but instead make them creepy. Here was a CGI-generated Lombardi, whose familiar visage looked somehow alien as he walked city streets and smiled at football-tossing kids and parents.

The real Lombardi might have stopped by St. Willebrord Catholic Church, a red-brick Gothic revival structure in downtown Green Bay. That’s what he did every morning before he went to the Packers’ office, a couple of blocks away. A marker that stands beside the church explains: “A devout Catholic, Lombardi would invariably arrive minutes before 8 a.m. on weekdays, park in the back lot, and enter the church through a side door.” 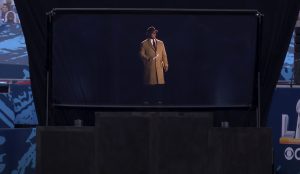 Vince Lombardi on the big screen before Super Bowl kickoff. (Screenshot via YouTube)

The Super Bowl segment didn’t include any such thing: Major media and pro-sports leagues can be squeamish about expressions of faith. They’re surely right to assume that few people tune into the Super Bowl because they want to hear sermons, even as the broadcast featured a series of secular sermons about patriotism and social justice. At any rate, the NFL’s title game is a rare, unifying event in our fractured culture; 96 million people watched it. Some came for the football, others awaited the halftime show, and all sought a spectacle of entertainment. As CBS play-by-play man Jim Nance said at kickoff: “Let’s sit back as a nation and enjoy.”

Then there were the commercials — always a main attraction. This year’s batch of ads, carrying a price tag of more than $5 million per 30 seconds, included the usual mix of celebrity cameos, comic quips, and deadening sobriety — and also a handful of references to Christian faith.

The most explicit and earnest came from Jeep, in a two-minute ad called “The Middle” and featuring Bruce Springsteen, the rock ‘n’ roll musician. “There’s a chapel in Kansas, standing on the exact center of the lower 48,” says Springsteen, referring to the U.S. Center Chapel, which sits near the town Lebanon, at the geographic center of the contiguous states. “It never closes. All are more than welcome to come meet here, in the middle.”

Metaphor alert! Springsteen’s line, of course, refers to America’s political divide and the need to overcome it. On screen, the rock star drives around silos and train cars in a snowy landscape. His Jeep’s top is inexplicably removed; during the filming, he must have been freezing. Meanwhile, his voiceover speaks of bridging “red and blue” and “freedom and fear.” These are worthy sentiments, and the ad decorates them with faith-based visuals that include not just the little chapel, but also several crosses, Springsteen’s kneeling in a pew, and the lighting of a candle as if for a prayer intention. In a vaguely Christian conclusion, Springsteen says, “Our light has always found its way through the darkness. And there’s hope on the road up ahead.” Its final image is an outline of the country (minus Michigan’s Upper Peninsula) with a slogan: “To the ReUnited States of America.”

The irony is that in trying to transcend our politics, the ad reminds us of them. Are we really more united today than we were a year ago? Springsteen, an outspoken Democrat, almost certainly wouldn’t have talked up “light” and “hope” if Donald Trump had won re-election. The Jeep commercial seeks to amplify the message of “unity” that has emanated from President Biden’s White House — and it’s willing to deploy religious symbols in pursuit of its purpose. Maybe if Springsteen had entered the chapel and found the hip-hop artist Kanye West, a onetime Trump supporter who records Christian music, it would have felt more like a middle-ground meeting and less like a manipulation. 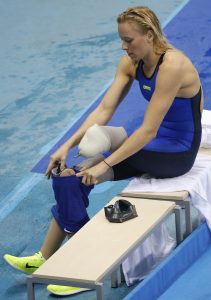 A single bit of explicitly Catholic imagery came during a 30-second commercial for M&Ms, which pulled together a string of short scenes in which people offer the candy to make up for perceived slights. Outside a confessional, a man gives a bag of M&Ms to his confessor and says: “I wish you didn’t have to hear all that.” It’s genuinely funny, and it depicts an element of Catholic culture as ordinary rather than exotic. It may even have the effect of reminding Catholics to examine their consciences and avail themselves of the sacrament of reconciliation as we prepare for Lent — at least giving God a chance to work in mysterious ways.

Maybe even through a Toyota commercial: The car company aired what may be the most faith-filled ad of all, telling a one-minute story about Jessica Long, a swimmer who has won 13 gold medals at Paralympic games. The ad dramatizes a phone call from an adoption agency to Jessica’s future mother, who learns about a child in an orphanage whose legs require amputation. “Her life, it won’t be easy,” says the caller. Then there’s a pause, almost as if the caller expects Mrs. Long to back out. But instead she goes all in: “It might not be easy, but it will be amazing.”

The ad doesn’t say anything about church or God or Jesus — and it delivered what may the most pro-life message ever seen during a Super Bowl.

It also may have brought to mind the deep-fake Lombardi and his pre-game pep talk, which apparently was inspired by words that the famous coach once spoke: “After all the cheers have died down, and the stadium is empty, after the headlines have been written, the measure of who we are is what we do with what we have.”

And sometimes this measure even includes what we see on millions of television screens, on the first Sunday in February.