Aristotle, St. Thomas Aquinas, and Kierkegaard have all tried to answer the question: What is the meaning of life?

The new Pixar movie “Soul” (now streaming on Disney+) follows Joe, a jazz musician who finally gets his dream gig of performing with a famous jazz quartet, and then immediately dies. Joe’s soul faces a large glowing light called “the Great Beyond,” refuses to accept his fate, and runs in the opposite direction.

Joe ends up in “the Great Before,” the place where souls are manufactured, given their “spark” and sent to earth. The spirits who run the Great Before confuse him for a mentor soul and they pair him up with an unborn soul, the 22nd soul ever created, who has spent millennia in the Great Before with no desire to go to earth. After some spiritual hijinks, both souls end up on earth with 22 stuck in Joe’s body and Joe’s soul is in the body of a cat.

“Soul” is standard for Pixar, with cute character design and a beautiful score. It is reminiscent of “Inside Out” in its personification of abstract ideas like human emotion and the afterlife. Just like NBC’s “The Good Place,” the afterlife is imagined as a divine bureaucracy, where people can slip by undetected and accidentally be resurrected. To no Catholic’s surprise, the movie’s theology leaves something to be desired. But its philosophy is what caught my attention.

The characters repeatedly reference something called a “spark.” In the Great Before, a soul needs to find its spark in order to go to earth. Joe thinks the spark is a soul’s purpose and falsely deduces that music is his purpose for living. At the end of the movie, Joe asks one of the spirits about this and they say, “Oh, the spark isn’t your life’s purpose.”

The spark, we learn, is connected to a soul’s desire to live. 22 eventually finds her spark after living in Joe’s body. She realizes life is worth living after she tries pizza, rides the subway, and sees leaves falling from a tree. She enjoys walking so much, she suggests walking could be her life’s purpose.

Joe realizes the spark isn’t purpose at all. The spark is what makes a soul enjoy life. So maybe your spark is music or math or walking. Whatever makes you enjoy living life is your spark.

Ultimately, the film seeks to answer “What is the meaning of life?” but comes up with a circular answer: The meaning of life is just to live it. That might sound like a simple, wise idea, but it begs another question: What does it even mean to live in the first place?

Here, finding an answer is even more elusive.

There is a right way and a wrong way to live, and the movie acknowledges that. The hippies help a hedge-fund manager realize he’s wasting his life, but what makes managing a hedge fund different from playing music? Why can’t he live his life that way? “Soul” doesn’t distinguish between the right way and the wrong way to live enough to actually help a viewer discern what a “spark” really is.

The movie claims its characters are in search of life’s “big questions,” but maybe the characters are satisfied with those questions remaining unanswered. For some reason, Joe is fine with knowing what happens after death and not telling anyone. The spirits beyond the grave are capable of communicating the meaning of life but choose not to. It is left up to individuals to find out what the meaning of life is for them. 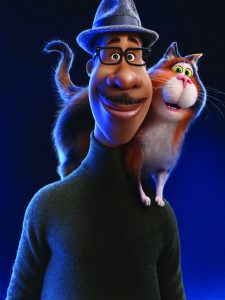 This answer is pure relativism. Ironically, “Soul’s” meaning of life is satisfactory only if you assume an objective moral code. In other words, the movie gives the viewer license to create their own meaning for life, assuming that meaning won’t violate the generally accepted moral laws. While it does encourage viewers not to chase after useless things, (money, fame, etc.) it doesn’t give them a real reason not to do so.

The decision made at the end of the film by a key character reveals a core belief of the movie: life on earth is better than death. Certainly, if there is no heaven or hell, no personal, all-powerful God, and no objective morality, then this makes sense.

But even if the purpose of life is simply living, then death is the ultimate inescapable defeat. And since defeat is inevitable, why is life worth living at all?

“Soul” deserves credit — and serious attention — for confronting the question of existence and purpose head-on (since it is a movie made for children, parents should follow it up with a quick discussion afterward). And yet, Christianity gives a different, and radically more hopeful answer to the apparent hopelessness of death. Through the historical event of what was Jesus Christ’s resurrection from the dead, the Gospel assures victory over death through death.

The key difference between “Soul” and say, St. Aquinas, is that the former embraces hopelessness as if it is hope itself. The danger here is that if the hopelessness isn’t felt, God is not sought.

It is a philosophy that could only come from a culture that has embraced this hopelessness. A culture, in other words, that is in desperate need of the Gospel.

Patrick Neve is a youth minister and speaker based in Pittsburgh. He hosts The Crunch Podcast and is studying for his master’s in theology at Franciscan University of Steubenville. You can find his writing on his website, https://patneve.blog/.