The accidental tragedy of the new ‘West Side Story’

Steven Spielberg, populist bard of America’s childhood, grew up adoring “West Side Story.” He fondly recalls getting into trouble for singing the vulgar parts of the Leonard-Bernstein-penned, Stephen Sondheim-lyricized score around the dinner table.

Unfortunately, while he may know the words by heart, Spielberg has forgotten, in this adaptation, to include the sort of things that draw children to movies in the first place: joy, humor, freshness.

The new film is self-serious, expensive, and nostalgic — all the qualities that have weighed down the second half of Spielberg’s career. Laser-focused on accuracy and representation, the movie accidentally ends up endorsing the sort of divisiveness that leads to its central tragedy.

“West Side Story” is Romeo and Juliet reimagined as a tale of competing gangs in 1950s New York City. The Puerto Ricans “Sharks” and white “Jets” are constantly skirmishing over territory in the San Juan Hill neighborhood. They absolutely oppose any sort of mixing — in friendship or marriage. The protagonists are star-crossed lovebirds — Maria and Tony — Puerto Rican and Polish, respectively.

Maria is a wide-eyed innocent, played here by newcomer Rachel Zigler. Ansel Elgort is Tony, a hunky but somnambulant leading man whose lack of charm and passion drags the story down every time he’s on screen. In some lights he favors a young broody Harrison Ford, but without any of the danger.

Happily, the supporting cast is far more colorful. Mike Faist is electric as Riff, the edgy and vindictive leader of the Jets. He probably gives the most complicated performance — radiating vulnerability and false bravado. And Ariana DuBose is incredibly charismatic as Anita, rivaling Rita Morena’s original take on the character. 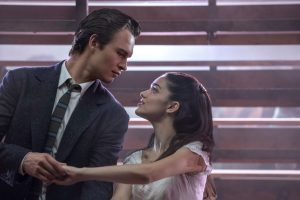 It’s clear Spielberg has poured a lot of heart and care into this adaptation. He glories in sweeping outdoor sequences and long views down the CGI-aged skyscraper canyons of the west side. He gives us a film full of detail. While there were plenty of exteriors in the original film, it also leaned heavily into abstract setbound scenes with lights down low and lights twinkling in the darkness. You had to paint in the exterior world in your head.

With the exception of one rather wonderful moment (singing “Maria,” Tony stands surrounded by the reflected glow of puddles, stepping out of realism into the world of fantasy and romance), Spielberg’s film is far less willing to leave things up to the imagination, both in the staging and the script.

One manifestation of this is a modern tendency to offer pat psychoanalytical motivations for characters’ behavior. The Jets, the movie explains, are the result of fatherlessness. That’s it. That’s why they’re bad. Tony is seeking to reform because he did a stint in prison for nearly killing a man. He regrets this, you see, so he’s trying to change.

In his New Yorker review, Richard Brody points out that Spielberg “delivers the very kinds of diagnoses that the song [‘Gee, Officer Krupke’] is meant to mock.” By locking characters into one simple backstory, the film makes them narrower, one-note sociological concepts wandering through the grim plot.

In an effort to correct the lack of Latino representation in the original film, the remake goes hard in the other direction, again working to “fix” things instead of considering what is necessary. Some of that is good — we get a cast made up of wonderful Latino performers. But other parts are needlessly confusing and divisive. English dialogue is interspersed with unsubtitled filler phrases in Spanish. This took me out of the film as I tried to dredge up the high school memories to translate it.

The worst fallout of this focus on identity is that it muddies the central moral of the story. When Anita narrowly escapes assault by the Jets, she proudly declares in Spanish that she is not American, but Puerto Rican. The music swells and light blazes from the window behind her.

Such a triumphalist spin on Anita’s alienation from the “America” she praised earlier in the film profoundly misses the point of both the musical and the source play. It’s a tragedy that Anita would declare herself Puerto Rican, not a great clapback moment. In the original film, the strains of “America” play queasily underneath the attack, drawing our attention to the terrible contrast between what she wanted America to be and what it was.

“The divisions between the Sharks and the Jets in 1957, which inspired the musical, were profound,” Spielberg said in an interview with Yahoo. “But not as divided as we find ourselves today.”

As well-meaning as such a statement is, it’s also ridiculous. It’s as if the director is determined to be morose, insisting we see the past as a bad time that isn’t even past. But as imperfect as things are now, a recent Gallup poll shows U.S. approval for interracial marriage had risen from 4% in 1958 to an all-time high of 94% in 2021. Change happened; it is possible.

But like its director, the new “West Side Story” is bereft of hope that things could ever be otherwise than as they are. A key to the tragedy of the 1961 film was that it felt plausible that one could escape the cocksure posturing and proud vengeful cycles of the gangs. It felt like a toss-up, anyway. Here, instead of the lovers getting the great optimistic anthem, which goes, “There's a place for us / somewhere a place for us,” these words are sung quietly, sadly, by a regretful old woman.

The latest “West Side Story” is not terrible. There are some nice moments in the film — particularly any time Mike Faist and Ariana DeBose get to dance. It has Spielberg’s characteristic attention to detail and to crafting beautiful, elegant images. But it feels more like a period piece infused with modern angst, instead of an old classic bursting with fresh energy.