For Ron St. Angelo, photography became a passion at Beaumont High during the mid-1960s and then his life's work soon after his return from two tours in Vietnam with the U.S. Navy. 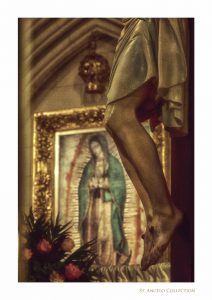 Two of his most frequent subjects have been the Diocese of Dallas, with which he has published four books, and the Dallas Cowboys, for which he served as official photographer for more than three decades -- earning him three Super Bowl rings.

"The work that I did was pretty much a gift from me to God for the talent he gave me," St. Angelo said.

At 72, he said he's 100% disabled from exposure to Agent Orange in Vietnam, which prevents him from attending in-person Mass, but he is a graduate student at the University of Dallas in Irving studying theology and philosophy.

"I decided I was going to dedicate the rest of my career to repaying God for giving me that talent," he told The Texas Catholic, diocesan newspaper of Dallas.

"We are grateful to Ron for gifting the Diocese of Dallas with the St. Angelo Collection," said Kelly Halaszyn, development director for the diocese. "This historical collection of photography of the Diocese of Dallas captures the richness of our faith, and we look forward to preserving these images as part of our treasured collection."

Said Joyce Higgins, the diocesan archivist: "Ron St. Angelo's use of the camera to create this photographic collection gives us an opportunity to see ourselves and the world around in these historical moments of the Diocese of Dallas. They will be used for generations to come."

"When I pray before I photograph, I say, 'God, I want you to show me what you want me to see,'" he said.

St. Angelo's passions for the Catholic faith and America's Team, as the Cowboys are known, crossed paths late in the 1993 football season when he decided to shoot a time-lapse image of Texas Stadium during a Monday Night Football game from Braniff Memorial Tower at the University of Dallas.

That required lugging his equipment to the top and tying it down with bungee cords before shooting. The result was particularly memorable, and he returned to the tower in April 2010 to record the implosion of the stadium.

"I'm a storyteller with a camera," St. Angelo said. "I use the same style with the Cowboys and the diocese. A lot of stuff is unfolding in real time in front of you. When something important happens, you'd better be ready." 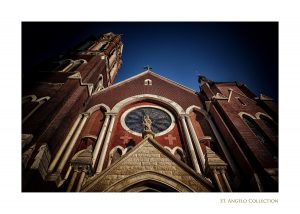 The Cathedral Shrine of the Virgin of Guadalupe in downtown Dallas is seen in this undated photo. (CNS photo/Ron St. Angelo Collection via Diocese of Dallas)

He and his wife of 41 years, Joanna, live in Grapevine, Texas, on "a little piece of heaven" that includes a spring-fed pond. He's a founding member of Mater Dei Personal Parish in Irving and is a patron of the Carmelite monastery in Dallas.