How Peter Johnston RVA is changing the Christian rock scene

That’s the risk of what can happen when a message overwhelms its medium — but Johnston insists that religion and rock can mix, and he has spent the last three years trying to prove it by letting his Catholic faith inspire his music. His latest album, released in October, is “Joyful-Sorrowful,” a collection of 10 songs animated by the rosary and planted firmly in the genre variously known as “alt rock” or “indie rock.”

“Creating any kind of art is an attempt to grasp or gain a glimpse of the eternal beauty of God,” says Johnston. “I believe it can be done with guitar, bass, and drums and backed with the truth of the Catholic Church.”

The 44-year-old Johnston, whose real name is Peter D’Alema, records as Peter Johnston RVA, in an homage to an ancestor on his mother’s side as well as his home of Richmond, Virginia. When he moved there to attend graduate school, he joined the city’s rock subculture as a vocalist and guitar player in secular bands such as We Are Childhood Equals and One Friend. For years, they recorded songs and performed shows, but neither became more than a side hustle: In his professional life, Johnston is a nonprofit banker whose clients are local governments.

He’s also a practicing Catholic, and therefore a rarity in a scene that’s more about Saturday night parties than Sunday morning pieties. “When we went on tour, we’d have to plan for me to attend Mass,” he said, adding that among fellow rockers, he encountered more curiosity than skepticism about his faith. “A lot of musicians are spiritual, even if they’re not religious,” he said. “In music, you’re always grasping for something eternal, such as a song that will outlast you.” 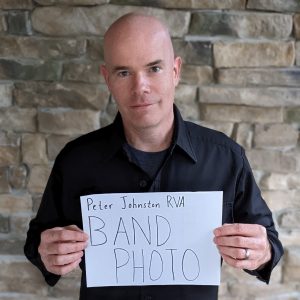 Johnston felt the same yearning. Over time it grew and combined with his Christianity, whose themes started to seep into his songwriting. Yet stepping fully into the mode of Catholic rock took the COVID lockdowns, which led to the dissolution of his band because its members could not gather. He also remembered Pope John Paul II’s letter to artists in 1999. “It asked Catholics to start a revolution in the arts, drawing people to faith through beauty,” he said. “It just took me a while to get around to it.”

Since then, he has released nearly three dozen songs. Eight of them are on his first album, “Be Not Afraid,” whose title track seeks to set the tone for his musical mission.

“It’s a battle cry,” said Johnston. “Between the pandemic, a wave of abuse scandal news, and just the general fear that was pouring out of every news outlet around the time, the lyrics try to remind us that we can’t let despair creep into our hearts and souls.” Next came a series of three-song EPs, including “City of God,” “King of Kings,” and “Les Trois Coeurs.”

Another EP, “Blessed Joseph,” came out last year, which Pope Francis dedicated to St. Joseph. It contains one of Johnston’s favorite songs, “Our Lady of the Underground,” named for a subterranean chapel in Cairo, where tradition says Jesus, Mary, and Joseph lived after their flight to Egypt. “That story didn’t really resonate with me until I had kids,” said Johnston, who has five. “It’s important to appreciate the gravity of their situation, and what it would mean to live and work for years in a foreign and pagan land.”

Johnston records vocals and most of the instruments at home and then sends the digitized files to a friend who owns a studio in Richmond and plays the drums. “Normally you’d lay down the drums first,” says Johnston. “We do it the opposite way.”

When the mixing and mastering is done, Johnston releases his music to the world. The entire catalog of Peter Johnston RVA is available on Bandcamp and major streaming services. Although Johnston is a veteran of the stage, he never has played these songs before a live audience. “They feel like paintings,” he said. “You record them once and then move on.” 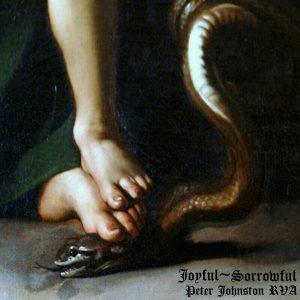 Their sound, according to Johnston, is “a blend of regular rock with punk,” influenced by British Invasion bands such as the Kinks and the Zombies as well as modern artists such as Guided by Voices, the Pixies, and Damien Jurado. It fits broadly under the label of “alt rock,” a genre that exploded in popularity in the 1990s, featuring distinctive chord progressions and irregular time signatures, plus “low-fi” production values that favor authenticity over slickness. In many of Johnston’s songs, the bass guitar — his favorite instrument — comes to the fore.

Johnston likes to release his music on fitting feast days, and “Joyful-Sorrowful” came out on Oct. 7, the feast of Our Lady of the Rosary. Its opening song, “Annunciation,” is an excellent introduction to his whole project, with its alt-rock vibe and lyrics that recount the conversation between the angel Gabriel and Mary.

Other highlights include “Presentation,” which tells its story from the perspective of Simeon, and “Carrying,” which sounds like it could be the closing number on an arena-rock setlist. Johnston has plans to put out new music in 2023, including “Glorious-Luminous,” a companion album to “Joyful-Sorrowful.”

“I’m very much a traditionalist when it comes to music used in worship at Mass,” said Johnston. “My songs aren’t for that.” Yet they have their purpose: “They can be a way to contemplate Christ, mortality, the state of one’s soul, and more through a type of music that speaks to a certain kind of person. This potentially can have the effect of drawing people to a truth that they never previously had considered or deepening an understanding that they already know to be true.”

Even Hank Hill might agree: Johnston is making rock better.