Oliver Sacks, the neurologist who tapped the power of empathy

Fans of Oliver Sacks — the neurologist whose book “Awakenings,” which became a hit movie in 1990 and starred Robin Williams — already know the important role he has played over the last 30 years in popularizing neurological science and turning the “medical case study” into a literary genre all its own.

But I didn’t realize until I saw the new documentary, “Oliver Sacks: In His Own Life,” that more than a talented writer and dedicated clinician, Sacks was what Henri Nouwen would have called  “a wounded healer”: someone who through suffering great personal difficulties transforms himself into a healer of those very same maladies.

Sacks had a very difficult childhood. A troubled youth, he battled addiction and recalled being suicidal as a young adult. His older brother of two years suffered from schizophrenia and ultimately committed suicide. His mother, a renowned British surgeon, would bring home dead fetuses from time to time and even suggested that 10-year-old Sacks dissect one.

During the London Blitz of World War II, he and his brother were sent to a boarding school for safety, where they found themselves the victims of extreme bullying and frequent beatings.

In late adolescence, when Sacks admitted under questioning from his father that he “liked boys better than girls,” his mother told him she “wished he had never been born.” He left the UK on his 28th birthday for California and remained celibate for the next 35 years. 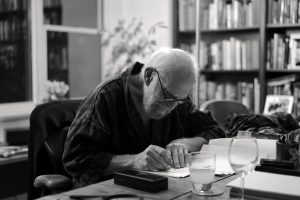 Oliver Sacks writing in his apartment in 2015, the year he died. (Bill Hayes)

In California he acquired an addiction to amphetamines and to riding his motorcycle at dangerous speeds along the coast, sometimes riding from Venice’s Muscle Beach to the Grand Canyon nonstop for 12 hours to see the sunrise.

Eventually Sacks found his way to UCLA, where he studied medicine. Initially, he did so with mixed motivations and to not much success, until he landed an internship at the university’s hospital. Then began a long, winding journey that brought him to New York to work as a clinical neurologist.

It was there that his famous experiments with the drug “L-dopa” led to the miraculous awakenings in which many of his patients returned from their comas wondering where all the years had gone — some still stuck in 1927 or 1949.

Tragically, these awakenings were not permanent, and all the patients eventually returned to their previous catatonic states. When his book about these studies was turned into a film, Sacks was suddenly propelled to the forefront of his profession, where he has stayed for more than 30 years as one of the most important voices for (and practitioners of) compassionate neurological care.

Sacks’ career was marked by a fascination with the experiences of outsiders, beginning with himself and continuing into his research into bats and octopuses, creatures that live on the same earth as we do, but live, move, and have their being in entirely different realms of experience.

These studies complimented his clinical care of comatose and catatonic patients, ultimately leading Sacks to publish his case studies that acknowledged the often unseen, underappreciated heroism, grace, and dignity of his patients.

Many of Sacks’ patients could not walk, talk, hear, or see. And, yet despite the difficulties this poses for treatment, Sacks made it his life’s calling to serve them. And by giving them rapt, personal attention — attuned to every nuanced attempt at communication — he has come to learn how many of them experience their lives.

The questions they posed to him are the same questions he once posed to himself as a young man: “Who am I?” “Why do I feel these things?” and “Why don’t I feel what other people feel?” — questions many doctors simply have not the time nor the capacity to entertain for very long.

Yet Sacks, it appears, knew what these suffering souls needed to hear because he had spent most of his life on the patient’s side of the stethoscope — suffering from childhood trauma, ADD, migraine, addiction, depression, suicidal ideation — and, as we find out moments after the film begins: a diagnosis of fatal metastatic liver cancer. 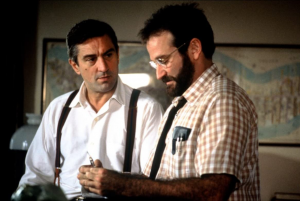 Robin Williams, who played a character based on Oliver Sacks, and Robert DeNiro in the 1990 film "Awakenings." (IMDB)

The film quotes a nun of the Little Sisters of the Poor, Sister Lorrain, who worked with Sacks at one of the hospitals run by her order: “Clearly Oliver’s been through something. You don’t get like this without deep, deep experience.”

The journalist Robert Krulwich believes that, by publishing case studies, Sacks “storys” his patients’ lives into the world, which releases them from isolation and diminishes the stigma of their afflictions.

In fact, Sacks exhibits such profound empathy for his patients, he seems at times to “become” one with them, often taking up their movements, cadences, voices, and gestures in sympathetic accord with their various symptoms and states of mind (these moments are some of the most moving scenes in the film).

“We are all patients,” Sacks explains, the doctors and himself included. We all “treat” one another — sometimes with care and compassion, sometimes not so much. But no one possesses a higher biological status than anyone else, and although each of us see the world from a unique point of view and have our own unique crosses to bear, not one is exempt from mortality or in any way above it.

Viewers of all stripes, religious or not, will find much to learn from this moving portrait of the quintessential “wounded healer” who shows us what “agape” looks like on the embattled, ever-changing frontlines of clinical neurology.

“Oliver Sacks: His Own Life” is a documentary film by director Ric Burns that is part of the acclaimed PBS series “American Masters.” To watch, visit pbs.org/video. The film is recommended for mature audiences; viewer discretion is advised.