Once considered the “discarded” image of the Virgin Mary, Our Lady of the Rosary of Chiquinquirá will now have a place of honor in the Vatican Gardens, with a replica built with 70,000 tiny mosaic pieces.

The presentation of the mosaic will take place on Friday. It’s a gift of the Colombian government to Vatican City State that was financed by the Dominican order, that has historically been tasked with running the shrine where the 16th century image is housed.

Our Lady of the Rosary of Chiquinquirá is the patroness of Colombia and also venerated in Venezuela, Peru, Ecuador and Bolivia.

Jorge Mario Eastman, Colombia’s ambassador to the Holy See and the driving force behind the project, told journalists on Tuesday that he had invited Pope Francis to take part in the July 9 ceremony, the feast day of Our Lady of Chiquinquirá and also the day in which the pontiff’s home country, Argentina, marks its independence.

“He had originally said yes, and it would have been the first time the pope takes part in such ceremony,” Eastman said. “But then, without giving a reason, we were told that the pope wouldn’t be able to participate in the end. At the time, I won’t deny, it hurt a bit. But since Sunday, it’s been clear why he had to cancel!”

The ambassador is referring to the Vatican announcement that Francis was being hospitalized for intestinal surgery. The following day, the papal spokesman Matteo Bruni told journalist that, barring any complications, the pope would be staying in the hospital for seven days. 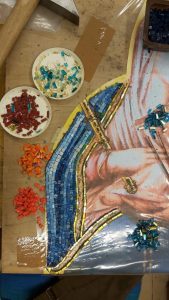 A preview of the mosaic of Our Lady of the Rosary of Chiquinquirá that will be placed in the Vatican gardens on Friday, July 9, 2021, as a gift from the government of Colombia. (Courtesy Colombian embassy to the Holy See via Crux)

According to Eastman, Friday’s gesture has several meanings, including the fact that the patroness of Colombia will now be in the Vatican, next to other Marian images, such as Our Lady of Carmen, gifted by Chile, and Our Lady of Guadalupe, a gift from Mexico.

“Secondly, we are going through a very difficult time, both Colombia as a country but also the world is suffering, with a pain and uprooting caused by the pandemic that is really difficult to understand,” he said. “I believe that Our Lady gives a breath of fresh air for Latin America where she is so highly valued. It is a message of hope.”

The original image, painted on a cotton support, had actually been discarded for almost a decade, between 1577 and 1586. After being enthroned in a small chapel that had a leaking roof, the painting — that includes the Virgin, St. Andrew and St. Anthony of Padua — lost its color and was abandoned, eventually used as a wheat sifter, until a devout woman by the name of Maria Ramos found it and placed it in a small chapel.

Tradition has it that a miraculous restoration of the painting occurred on Friday, December 26, 1586, which gradually healed the scratches and holes in the cloth, overlaying them with color and light. The image stood out again, having recovered its color and brightness. Three other times the image would be unexplainably illuminated, the last time being in March 1999.

“What happened serves as an example of the throwaway culture,” Eastman said. “At a time when the pope is calling our attention against the throwaway culture, that discards people in favor of individualism and an economy of unbridled consumerism. And the image of Our Lady of the Rosary of Chiquinquirá was discarded for years, until a woman discovered it and began to pray to that image that was discarded, then as so many people are discarded today. And when the woman noticed it, the image recovered its beauty, as it can happen to every person, no matter how alone and forgotten, when one pays attention to them or gives the necessary help.”

Dominican Father Carlos Mario Alzate Montes, chaplain of the Cathedral of Our Lady of Chiquinquirá, also spoke with Rome-based journalists on Tuesday, reviewing the history of the image and the role it played in Colombia’s independence from Spain: Simon Bolivar, considered the country’s founding father, entrusted his military campaign to this Marian title.

In almost 450 years, he said, the image left the shrine on 10 occasions, including during the war for independence and the 100th anniversary of Colombia becoming a free nation. In 2017, during Pope Francis’s visit to Colombia, it was taken to Bogota at his request. The Argentine was the second pontiff to venerate it, after St. John Paul II had done the same in Chiquinquirá in 1986.

Mosaics, Our Lady of the Rosary of Chiquinquirá, Vatican