New film on Knock apparition asks: What kind of healing do we need?

The situation of Ireland in 1879 was not a pretty one. A majority of the population suffered from yet another crippling potato famine, the government struggled to procure humanitarian aid, and a history of religious persecution tested the faith of many in the traditionally Catholic country.

They were, one could argue, sufferings comparable to what the world is experiencing today due to the coronavirus (COVID-19) pandemic.

It was in that year and in that country, however, that Catholics believe something miraculous happened. The story of that miracle is told in a modern light in “Hope: Our Lady of Knock,” a new documentary from the Global Catholic media network EWTN.

Winner of the Catholic Press Association’s 2020 Gabriel Award, this 87-minute film tells the story of how a small village in western Ireland became a major shrine that today draws thousands of pilgrims from around the world.

The story begins on the rainy evening of Aug. 21, 1879, when a group of villagers from Knock beheld a sight they would never forget. Above the village churchyard appeared four majestic figures: the Virgin Mary, St. Joseph, St. John, and a lamb upon an altar, all bathed in heavenly light.

Through interviews with historians, clergy, and pilgrims, in addition to dramatic interpretations, “Hope” offers 21st-century audiences not just a moving story of the past but an inspiring message that can comfort a world in pain today. That message is the power of spiritual healing.

To set the stage, interviewees describe the political and social climate of Ireland in the years leading up to 1879. The challenges of that time might sound somewhat familiar to audiences today: widespread illness, financial hardship, fear, anxiety, and political tension.

Amid all of this, the apparition seemed to offer consolation tailor-made for the devout yet downtrodden people of Ireland.

“The novena prayer to Our Lady of Knock … reads, ‘You gave hope to your people in a time of distress, and comforted them in sorrow,’ ” says Noirin Byrne of the Knock Museum in the film. “And indeed, that is what she did when she came.” 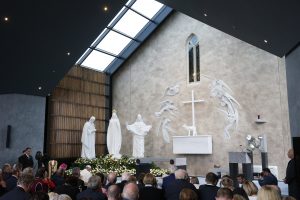 Pope Francis prays as he visits the Chapel of the Apparitions at the Knock Shrine in Knock, Ireland, in 2018. (Paul Haring/Catholic News Service)

On one level, the apparition ushered in some long-awaited practical relief to the country’s crises. The following year, petitions to the government to aid the starving population were finally answered, and after three successive potato crop failures, 1880 yielded a good crop at last.

However, the film pays much less attention to these events than it does to the spiritual impact of the apparition.

According to the 15 eyewitness testimonies, when the viewers saw the Blessed Virgin and St. Joseph fixed in positions of prayer, they interpreted it as a reminder of the consolation that prayer provides. Despite the pouring rain, they began reciting the rosary then and there.

Moreover, the apparition’s lack of words or extraordinary miracles of nature (as seen at Fátima or Lourdes) did not prevent the viewers from receiving a heavenly message. On the contrary, this was exactly the kind of revelation the Irish people needed, says Tom Neary of the Knock Shrine Society.

“Words are useless when people are down on the ground,” he says in the film. “They don’t want to listen, but they do want a presence.”

Indeed, the tranquility of the scene encouraged several villagers present to approach the figures and remain there for hours, filled with a sense of gratitude and peace.

Such descriptions remind audiences that in many cases, those undergoing physical hardship need spiritual consolation just as much, if not more so, than practical solutions.

“Hope” in no way disregards the significance of physical healing in its own right. Within days of the apparition, we learn, pilgrims flooded Knock, and throughout that year, the parish priest recorded about 600 accounts of miraculous healings.

More recently, in September 2019, the Church officially recognized the miraculous nature of a woman’s sudden cure from multiple sclerosis during her 1989 pilgrimage to Knock. 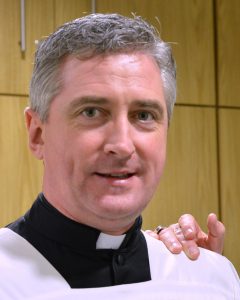 Still, the film makes clear that while these physical healings are wonderful, they are not the point of the Knock Shrine. Even more profound is the spiritual healing that it offers its visitors. According to rector Father Richard Gibbons, the primary channel for this kind of healing is the sacrament of confession.

“The confessional is our engine room,” he says in the film. According to Father Gibbons, the Chapel of Reconciliation at Knock holds 50 confessionals, and throughout the year, chaplains hear about 4,000 confessions per week.

The priests who minister at Knock make it a point not to ask how long it has been since a penitent’s previous confession, in an effort to encourage people at any point in their spiritual journey to begin again. Father Gibbons notes that many people leave the confessional shedding tears of joy and relief.

Mass, Benediction, and Marian processions also play a central role at the shrine, and the grounds offer an idyllic environment for all pilgrims to pray or reflect.

For many, including those cured of physical ailments, the interior peace they received was the most wonderful part of their pilgrimage to Knock.

“When I stood up here in Knock Shrine, it had nothing to do with walking or moving,” says Marion Carroll, the woman cured of multiple sclerosis in 1989. “Right in front of me, I could see my own heart. I was so full of joy and peace and a love there is no end to.”

In the face of so many physical illnesses, injustices, and conflicts, the idea of “spiritual healing” might seem unsatisfying.

But “Hope” proclaims with conviction that such healing, though unseen, is more powerful than any tangible remedy. It reminds us that as we, too, seek healing amid turbulent times, Our Lady hears our petitions and comes to our aid. While she may or may not procure physical healing, she will always bring the most essential kind of healing: a hope and peace that nothing can shake.

“That’s really what Knock is about,” concludes Father Gibbons, “healing and forgiveness.”

“Hope, Our Lady of Knock” is scheduled to air on EWTN in Europe this August. It is available for purchase or rent at Amazon Prime and at www.ewtnireland.com.