‘Messiah’ asks: Are miracles enough to make us believe?

Being a Netflix show about a man who claims to be the Second Coming, I had plenty of doubts about “Messiah.”

The subject matter is sensitive (the show has been banned in Jordan, allegedly for misrepresenting some elements of Islam), and the risk of sentimentalism, banality, and ridicule was high (for some reason, actors playing messiahs always end up looking crazy or ridiculous).

In short, I did not think the writers could pull a 10-episode show out of this interesting premise without falling into stereotypes or “preaching to the choir.”

Thankfully, I was wrong.

Produced by Roma Downey and Mark Burnett (the couple behind the television miniseries “The Bible,” its sequel “A.D.,” as well as the remake of “Ben Hur”), “Messiah” is worth watching from start to finish. Sure, the show is far from perfect. The beginning is slow, almost too slow. There are too many side characters and a couple of subplots that could have been edited out.

But these drawbacks are largely compensated by the show’s many accomplishments. For one, there is a lot of quality acting: Mehdi Dehbi (al-Masih) is a subtle, mesmerizing savior figure (do his eyes show goodness and compassion, or is it mockery and deceit?); Michelle Monaghan (Eva Geller) is intense and convincing; and the international cast (the movie is acted in three languages) proves to be more than equal to the task.

Most importantly, the show provides an unusually deep and challenging approach to a set of crucial questions.

The plot revolves around the identity of its protagonist, a mysterious man named al-Masih who appears in Syria and performs great miracles. CIA agent Eva Geller, who is a skeptic at heart, starts investigating him. After being captured in Israel, al–Masih miraculously resurfaces in the fictional town of Dilley, Texas, just before a major tornado razes it to the ground.

Here he saves the daughter of Rev. Felix Iguero (John Ortiz), who was planning on setting his own church on fire. Here he gathers a great number of followers, who form a caravan that winds up in Washington, D.C., where al-Masih’s activity risks having serious international consequences.

The initial episodes move from desert to desert, from Syria to Texas. The implications of this imagery are clear: the new messiah appears in a world that is literally thirsting for meaning.

In the face of this, traditional religions seem inadequate (“Messiah” blends Christian, Islamic, and even Mormon ideas about the second coming): They all appear weary, impractical, and removed from people’s needs. Our world needs a real presence, a real answer to suffering and confusion. But is al-Masih the real thing?

The show won’t tell you. Yes, he performs miracles, but who is to say they are not illusions? And are miracles enough to grant belief?

To its credit, “Messiah” turns out to be not so much about whether al-Masih is Jesus returned or a charlatan, but rather about how people react when their belief systems are challenged.

CIA agent Eva Geller clings to her disbelief almost religiously, and it seems clear that her inability to believe in the supposed messiah has to do with her unwillingness to forgive, both herself as well as others. In a crucial scene she chastises her father, whom she can’t forgive, for attempting to find pardon and hope in the coming of the new messiah.

The reverend’s wife is also unable to believe, and though she may be right in disbelieving, it is hard to resist the impression that she fails to do so for the wrong reasons: She is just too cynical, too embittered, too blind to open herself up to the savior’s message.

On the other side of the spectrum is the reverend’s daughter, Rebecca, who finds pardon and redemption in al-Masih, feeling forgiven and accepted for the first time. Her belief in him might be completely misguided (after all we are never told whether al-Masih is the real deal, and there’s a good chance he is not), yet it has a positive effect.

The inevitable conclusion seems to be that people’s assumptions are as important as the events they are confronted with in determining their beliefs. Those who are unwilling to believe will not be persuaded, no matter what evidence is presented to them; and those who are willing to believe may easily be confused when their expectations come true.

Al-Masih may well be a false Messiah, yet the whole process of how people react to his actions has parallels in the Gospels.

There, too, there are contrasting reactions. There, too, miracles are not enough. According to the gospels, some apostles had doubts about Jesus even after witnessing his Resurrection.

“Blessed are you, Simon, son of Jonah, because flesh and blood did not reveal this to you, but my Father who is in heaven” (Matthew 16:17).

Significantly, the absolute certainty with which Peter declares Jesus to be the Messiah (a profession of faith made before the Resurrection) is understood by Jesus as a result of grace. Yes, faith is based on experience and requires an act of will and an initial openness, but ultimately faith, as opposed to belief, can’t appear without grace.

In a key episode, agent Geller interrogates al-Masih in a prison cell. Geller is convinced that al-Masih is a con man trapped in his own lie: He has gone too far with his act to back up into normality, and his only choice is now to follow through until he goes over the edge, bringing everyone else down with him. 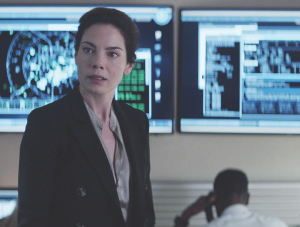 In his answer, al-Masih borrows the words from a book allegedly by the terrorist Oscar Wallace. The latter, a fictional character, is an allusion to the late modern writer David Foster Wallace and his famous essay “This is water.”

“In the day-to-day trenches of adult life, there is actually no such thing as atheism,” the real Wallace said in the essay, which was delivered in the form of a commencement speech at Kenyon College.

“There is no such thing as not worshipping. Everybody worships. The only choice we get is what to worship. And an outstanding reason for choosing some sort of god or spiritual-type thing to worship — be it J.C. or Allah, be it Yahweh … is that pretty much anything else you worship will eat you alive.”

It turns out Geller may be as delusional as al-Masih: She too has devoted her life to the pursuit of an idea, she too worships something, except she is not aware of it. She is not exercising the only freedom left to humans, the freedom to choose what to worship.

In the show, the fictional Wallace goes on to define his purpose as creating “a healthy confusion that sparks the need to question; confusion, causing fear, making us question everything, in search of some sense.”

That sounds like a good description of what “Messiah” tries to do, and there is no question that the show succeeds in its task.